Tumbling towards the centre of the galaxy, at the birth and death
place of millions of stars, it’s a little clot of blood that forms.

I no longer associate sunshine with drowning.

The ice is melting faster and faster now.

Every year, faster, the orchid agrees.

On the morning they found Sarvvis wrapped in kelp and
seaweed, I’d caught a cold.
(“SCHOLARS AND REINDEER”) 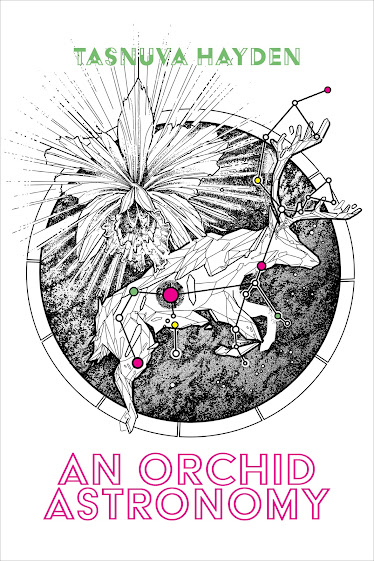 Calgary-based Tasnuva Hayden’s full-length poetry debut is An Orchid Astronomy (Calgary AB: University of Calgary Press, 2022), a book-length narrative around “the story of Sophie, of her personal collapse and of climate catastrophe, told in striking experimental poetry.” The back cover writes that “Sophie grew up in Veslefjord, deep in the Norwegian North, where the ice stretches to the horizon and the long polar night is filled with stories about the animals of the sea, ice, and sky. Now the ice is melting and the animals are dying. Sophie’s mother is also dead, leaving behind a daughter and a lover on the melting permafrost.” Hayden composes her Orchid as a sequence of lyric pinpoints, lines set as constellation across the page, linking stars to further starts to form her images, her stories; enough to hold the world together, simultaneously brief and sketched and across the vastness of narrative time. Through An Orchid Astronomy, Hayden has composed fifteen poems of varying length, breadth and scope, most of which are named for constellations, as well as occasional stars and other celestial offerings. Ranging from lengthier stretches to short, scattered bursts, the structure of the collection is held by a narrative through-line writing itself across a tension of expanding-and-contracting lyric. “What is civilization without / literature?” she asks, early on in the collection. “From the windows, watching stars. / Sand sugared across shoulders. // Hands or hooves?”

Posted by rob mclennan at 8:31 AM
Labels: Tasnuva Hayden, University of Calgary Press