He would sniff Ajax just to feel the burn
asynchronous to my youth in ditches
the grey matter of free will crunching
its way through the forest of worship
shame of clashing melodic intervals
self on screen not always so synched
but fun for a while ‘til a fanatic walked,
they all walk.

It’s why our scrambled intention to learn
how to trache the horizon was initiated.
Sadly, its execution was tragicomic,
deeply compressed yet histrionic, accurate yet
subject to the whims of the board
on which we all opened fire. Damn Ambien,
fucked five ways to Friday keep it down down,
landed into a house that ain’t mine,
baton gauntlet psychic scan
and where are my contours, my slop?

Did you reel in the sandtrap rubbing slamming
against illusive green? (“Economy, a Reshaped Spit”) 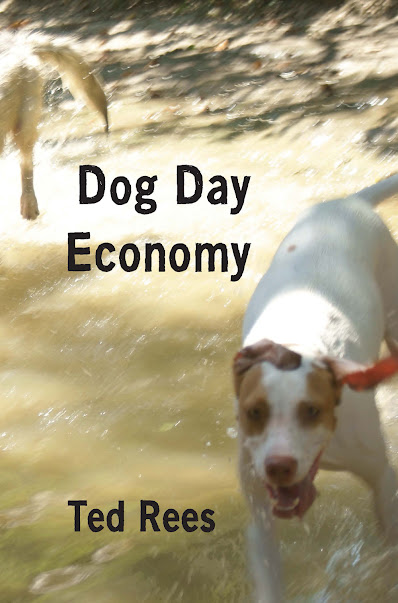 From Philadelphia poet, essayist and editor Ted Rees comes Dog Day Economy (New York NY: Roof Books, 2022), a suite of paired suites: from the sixty-odd page sequence “Economy, a Reshaped Spit” to the triptych “Dog Day Scrolls”: “I: Dog,” “II: Day” and “III: Scrolls.” There are curious echoes of Kootenay School of Writing language gymnastics in Rees’ articulations, one that has rippled across multiple writers in the interim, including Jeff Derksen, Colin Smith, Louis Cabri (who studied in Philadelphia in the 1990s), Colin Smith and even Philadelphia poet ryan eckes, blending a collage of sound and meaning across critiques of politics and policy, social justice and late capitalism. Rees composes collage-poems of despair and shifting foundations, poems that articulate a deep uncertainty and urgency, each of which feed off the other, writing savage, slant and skant across the body of a culture infused with its own sense of self-annihilation. “One day we’ll tickle again,” he writes, towards the end of the opening section, “but cold gin, / automatic rifles, discerning smiles / beneath masks, my binky.” His poems articulate simultaneously a savage, pessimistic critique and a hopeless, even desperate, optimism. As he offers in his “Notes on the Poems” at the back of the collection:

The poems of Economy, a Reshaped Spit were composed by writing with and around language that was physically cut and pasted from issues of The Economist magazine and Wikipedia articles on people who have disappeared mysteriously, with special attention given to those who seem to have disappeared voluntarily. They were written in Philadelphia between November 2019 and May 2020.

The poems of Dog Day Scrolls were first composed on large sheets of butcher paper utilizing luggage markers, permanent markers, packing tape, scraps of paper, and pens, in a rather physical process. They were written in Philadelphia between 2020’s summer solstice and autumnal equinox.