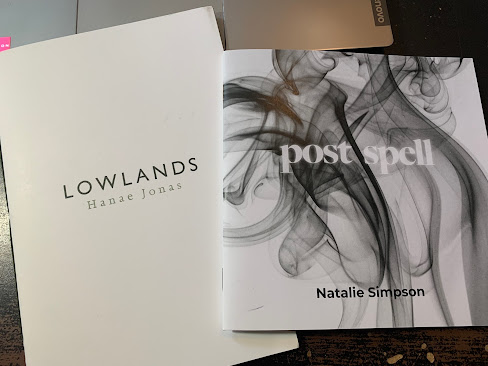 Given above/ground press turns twenty-nine years old in July, I’m toying with a BIG SUMMER SALE (although 2022 subscriptions are still available, which I would obviously back-date to January 1st). What else is happening? Our young ladies close out another year of e-learning (less than a week left!), with the hopes that they will emerge into in-person this fall (for Aoife, her first time attending in-person school, after two e-learning years of junior and senior kindergarten). I am curious to see how they might manage. And what might our summer bring?

Calgary AB/Toronto ON: I am very pleased to see new work by Calgary poet Natalie Simpson, her post spell (Gap Riot Press, 2022) [she had a chapbook with above/ground press earlier this year, as well]. Composed as fourteen pages of short, self-contained fragments in sequence, “post,” along with a final, short end-poem, “spell,” Simpson’s work has always reminded slightly (and vice versa) of Ottawa poet Sandra Ridley [see my review of her most recent here]. Both poets, have long existed as curious echoes of each other, appearing as poetic outliers (ie: no one else writes like either of them, and it is hard to easily determine influence or lineage through their lines), and through the ways in which their language is reworked and rearranged from straight lines and long passages to short, staccato bursts, accumulating turns of unexpected and impossible phrase. “trim ducklings // and tit wings,” Simpson writes, in the second section of “post,” “temporary galaxies // collapse // into referents [.]” One word shifts into another word, as meaning and sound resonate the differences between. I’ve always appreciated the way Simpson gathers phrases and thoughts, seeking an assemblage far more than the sum of its parts, and this sequence set with a curious kind of coda nearly as closure, a stitching-together of closing statement, as “spell,” indeed, offers:

turn eros into store, flaw into wolf, turn fallow to
laughing, lop to plod, lope into implode, feel into elf,
tether into wrath, cloud into dour, terse to rest, nothing
into other, final into lymph, turn simple into bliss, limp to
prim, turn tin to skint, bother to shod, caustic into tossed,
suture into rust

Charlottestown VA: The second title in Albion Books’ eighth series is Vermont poet Hanae Jonas’ chapbook debut, LOWLANDS (Charlottestown VA: Albion Books, 2022). Produced by Brian Teare in a numbered edition of one hundred and sixty-five copies, LOWLANDS writes an ecopoetics of spare, slow meditation, writing landscape, exile and intimate spaces, seeking space, ground and foundation. “When the Puritans came to New England,” she writes, as part of the sequence “Dusk,” “they left graves unadorned. // A loathing of icons, historians say. // But the sense is that the soul has flown away— // Here lies nowhere      snowed-over echo      the enduring / source of night.” There is something of the affirmation in her meditations, something spiritual that calls, rhetorically, out into the universe, seeking resolution to impossible questions. There are also echoes of the lyrics of American poet Rae Armantrout in the way Jones composes her length of meditative pinpoints, accumulating moment upon moment, albeit utilizing longer, stretched-out narrative moments into threads. Her poems pause, hold, pattern and patter, offering a casual stroll along the line in really striking ways. Oh, I would like very much to see more work from Hanae Jonas. As the second half of the poem “Imagining a Forest by the Sea” reads:

Have I reached the periphery of my survival

The lush undergrowth of his care

proportional to the exit of urgent images

which once I spilled freely,

I am not special, not even

for long periods of time.