I was curious to see poet Alisha Kaplan’s name on this past year’s Gerald Lampert Memorial Prize shortlist for the collection Qorbanot: Poems by Alisha Kaplan; Art by Tobi Aaron Kahn (Albany NY: State University of New York Press, 2021), having neither heard of the author (who divides her time between Toronto and Hillsburgh, Ontario) nor the publisher prior to that shortlist announcement (the book subsequently won this year’s award). Titled after the Hebrew word for “sacrificial offerings,” Qorbanot exists as a paired examination of how words and image simultaneously hold and contain memory, history, hope and trauma. The paired threads of text and visuals are set in seven numbered sections, collected and ordered brilliantly to fully adhere to a conversation between works by two separate artists, from the “studies” of painter Kahn—“Study for YMNAH,” “Study for VEIKUT,” “Study for EIKA” and “Study for AKYLA”—counterpointing the “offerings” by poet Kaplan (a number of titles of which repeat through the collection)—“Guilt Offering,” “Peace Offering,” “Masada Offering” and “Offering to the Lost Poet Rosemary Tonks.” The works included and enclosed speak of loss, and possibilities extinguished, as well as those that might still remain.

The last time my grandmother saw her father, he blessed her and said: Eat whatever you are given and be among the first to offer to work. 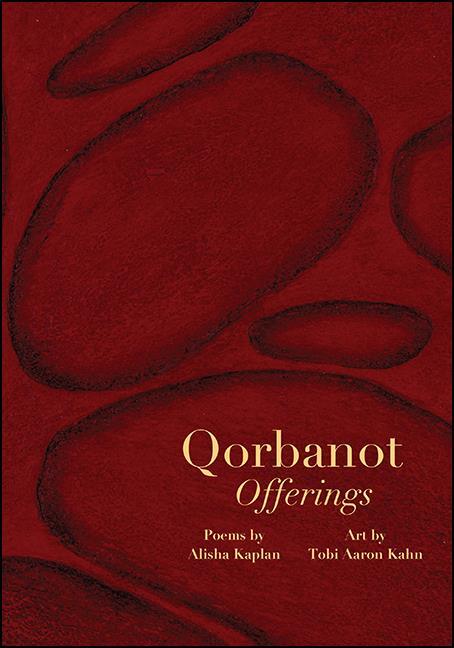 Akin to the ongoing work of Canadian poet Anne Carson, Kaplan’s lyrics contain multitudes, but offering as much spiritual as lyrical articulations on history, historiography and faith. Kaplan’s writing exists very much in conversation and collaboration with Kahn’s full-colour artworks (individually created across a span of some three decades, some of which might even pre-date the birth of Kahn’s collaborator), set in dialogue throughout the book, offering insight into faith and practice, offering and sacrifice, furthering a theology that speaks to a faith lived best and fully only through study and attention. As Kaplan writes as part of the essay “AVODAH,” which closes out her contribution to the collection: “This is fact: a sand grain can range from one-sixteenth of a millimeter to two millimeters. And the number of life spans to get there? I try to calculate how wide my hips are, measure with my eyes the dimensions of the hole.” As the back cover offers, Qorbanot

[…] explores the concept of sacrifice, offering a new vision of an ancient practice. A dynamic dialogue of text and image, the book is a poetic and visual exegesis on Leviticus, a visceral and psychological exploration of ritual offerings, and a conversation about how notions of sacrifice continue to resonate in the twenty-first century.
Both from Holocaust survivor families, Kaplan and Kahn deal extensively with the Holocaust in their work. Here, the modes of poetry and art express the complexity of belief, the reverberations of trauma, and the significance of ritual.”

This is a remarkable collection, one that opens, uniquely for a new poetry title, with a foreward by James E. Young, and closing essays by Kaplan, as well as Ezra Cappell, Lori Hope Lefkovitz and Sasha Pimentel. It is as though the creative sequence of call-and-response by Kaplan and Kahn exist as a foundation of study, and the supplemental pieces that surround this powerful and unique collaborative conversation exist to provide a fuller portrait of their work, and everything that surrounds it. As Young writes to close his foreword:

But if a postwar, antiredemptive generation of artists and poets remains averse to recapitulating the cycle of sin-destruction-redemption in the face of massive destructions like the Holocaust, it may still be open to finding some sort of artistic redemption in response to the small losses and micro-destructions of daily life. These are the qorbanot I believe Tobi Aaron Kahn and Alisha Kaplan have in mind as they ask whether their acts of art and poetry can redeem such losses without fully compensating them—or whether it is ever possible to articulate the voids left behind without filling them in. As this volume’s poet, artist, and contributing writers make so clear, the answers to these questions necessarily lie in the open spaces between words and images.