BASEBALL POEM WRITTEN BY A WOMAN

In St Louis tonight, the shortstop tips over the left
field wall, his left arm extended to break his fall lands
in a woman’s nacho cheese and as he slips his right
leg flies up to kick a plastic tray of nachos out of a fat
white man’s hand. The man drops his jaw. He licks
his wrist. Workers kick dirt over the man’s cheese—
maybe for safety, for aesthetics, lack of a broom—
and the trainer comes out to sponge his hand. One
of those Renaissance paintings. The open mouths.
The athlete’s body linking the spectators and their
nacho cheeses never stop moving.

The fourth-full length poetry title by Chicago poet Krystal Languell, following Callthe Catastrophists (BlazeVOX, 2011), Gray Market (1913 Press, 2016) and Quite Apart (University of Akron Press, 2019), is Systems Thinking With Flowers (Portland OR: fonograf editions, 2022). Systems Thinking With Flowers, winner of the 2019 Fonograf Editions Open Genre Book Prize, as selected by Rae Armantrout, is a collection that opens with a section of baseball poems in the mode of Jack Spicer (something followed since by the likes of George Bowering and Kevin Varrone, among others), as the opening poem, “PROPRIOCEPTION,” begins:

like phenomena, the importance of
of baseball to my marriage

can best be articulated
as extra-sensory perception 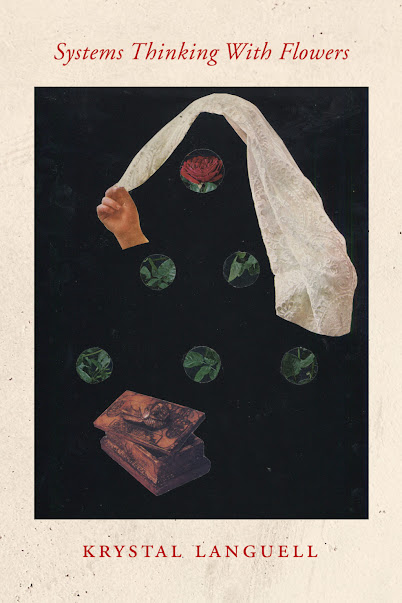 Languell writes baseball, “the thinking person’s game,” very specifically, while simultaneously utilizing the subject as a way to write through and about far beyond the game. “The celebratory fireworks are suspended / when the stadium opens to dogs.” she writes, as part of “BOO CLEVELAND BOO,” “My friend’s child put down her hot dog / and a golden retriever licked it. // This freed her up to focus attention on / cotton candy, showing us her tongue.” Throughout, Languell’s syntax and rhythms are bulletproof, composing lines that any bird would trust to light upon; the ways in which she writes poems propelled and set by and through rhythm. She writes the nuance of baseball, and how language ripples, providing linkages to deeper things, something Spicer knew full well, but never explored, at least so thoroughly. As the poem ‘HOW BORING!” offers: “I know obscurity is boring as replays / Necessary fabric to tie the room together [.]”

Set in two sections of short lyrics, the second section of the collection moves away from baseball into observational postcards, furthering her sharp examination of language and perception, offering a narrative ease but an exactness that cuts down to bone. “Pull a loose hair out of my bra,” she writes, to open the poem “PARDON MY FRIEND, BUT YOU’RE AN ASSHOLE,” “What do I have to show for it / A better set of pens might be the perfect thing / she was grieving on a yacht on Instagram / That doesn’t concern anyone you’d know [.]” As Rae Armantrout offers as part of her brief foreword to the collection: “There is a provocative tension here and elsewhere in the book between the precise, science-laced language employed and the shifty phenomena it seeks to describe and understand.” This is a collection with a subtlety that rewards, especially upon rereading, thanks in part to Languell’s precision, and the ability to make impossible turns. Armantrout continues: “Every word of that strikes me as just right. Languell identifies not with the flag, but with the loneliness of its flap. It makes me think about being simultaneously at home and in exile.”