I’ve looked it up many times online, and found bewildered postpartum people writing on forums, asking why they felt embarrassed about losing their babies, asking whether anyone else felt that way. I’ve found that the tendency of the responders in the comments is usually to say You have nothing to be embarrassed about. This is because most of the responders have babies who are alive. Grief is complicated. What you’re feeling is normal. I don’t believe you. (“Embarrassment”) 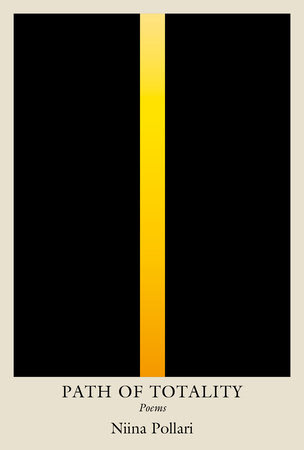 American poet and translator Niina Pollari’s second full-length poetry title, following Dead Horse (Birds, LLC, 2015), is the devastating Path of Totality (Soft Skull Press, 2022). “I need you // But I can’t talk right now // I know you understand,” the poem “At the Drowned Valley” opens. As the press release offers: “This collection is about the eviscerating loss of a child, the hope that precedes this crisis, and the suffering that follows.” Crafted as a loose memoir through poetry and prose, the pieces in Path of Totality are emotionally raw and powerful, examining and writing through an impossible grief. There is something reminiscent here of other recent writings on grief and trauma, whether Anne Boyer’s memoir of living with breast cancer, The Undying: Pain,Vulnerability, Mortality, Medicine, Art, Time, Dreams, Data, Exhaustion, Cancer, and Care (New York NY: Farrar, Straus and Giroux, 2019), Sarah Manguso’s memoir on her long-term illness, The Two Kinds of Decay (New York NY: Farrar, Straus and Giroux, 2008) [see my review of such here], or even Joyelle McSweeney’s own writing on the loss of a child, through the dual poetry collection Toxicon & Arachne (New York NY: Nightboat, 2020). Pollari writes through the contradictions and confusions of grief, how it unsettles, clarifies and distorts, writing it simultaneously sideways and straight on. “I wanted to write a true poem.” she writes, to open “There Is No Word.” “I started with a fact: She had soft hair. I know because I / touched my chin to it when I held her. // The truth is that when I held her, neither of us cried.” The ending of the two-page piece offers:

I walk through the body of every day like an organism be-
ing born. Through the red gel and muck of the underbelly.
Through all the female pain.

I say I walk but in truth there is no word for the locomotion
that I do.

The poems that make up Niina Pollari’s Path of Totality move through shock and sorrow, disbelief and grief, citing an anticipation that had suddenly, unbearably, gone dark. “All I have are facts and memories.” she writes, to open the prose poem “Facts and Memories.” “Facts are things that cannot be changed, and memories are impressions of a time when I did not yet know my own face contorted like this. // Facts are: Her weight and length. // Memories are: My loneliness. // After the fact, I invent a narrative. I see the story, its rising action, its fall. We all do this.” Throughout, Pollari works to plainly document her grieving as much as understand and work through it, moving through guilt, heartbreak, grace, silence and transformation. As the second section of the sequence “Animals” writes:

As the human brain tries to understand the event

After an interruption to its sense of pattern

We always say I didn’t think things like this happened

Instead they move right into righteous anger

And never forgetting the circumstances

There is such an emotional upendedness to her narratives, writing plainly and clearly of a variety of tasks through and around such a devastating loss, simultaneously dream-like, allowing the writing to display the impossibility of belief and feeling throughout. As the extended lyric “Hungry Ghost” writes: “The funeral director, my husband, and me // I ordered a small caffeine-free tea // I needed to order something // To pretend we were there // For a normal reason // On this day in October // Just days after my daughter // Came out of me not breathing [.]” This is a remarkable collection, one that pulls the threads of self and sorrow and remains, somehow, coherent throughout, and manages, despite the weight of such a sorrow, to reach a kind of solace; or at the very least, the beginnings of a way to continue forward. Towards the end of the collection, the prose sequence “Sunflower,” she writes:

I realize now that you came from the eclipse. You were sucked back into it when it was over, when our time together came to an end. You were beautiful and world-ending. You shocked me with your beauty, and I became so scared.

A blind spot burned into my retina. A permanent hole, like film chewed up by heat.

Sunflowers are sunny. Why wouldn’t that be.