the debt horizon brailles
crow. I am here        to shoot
the bruise-shaped
smoke 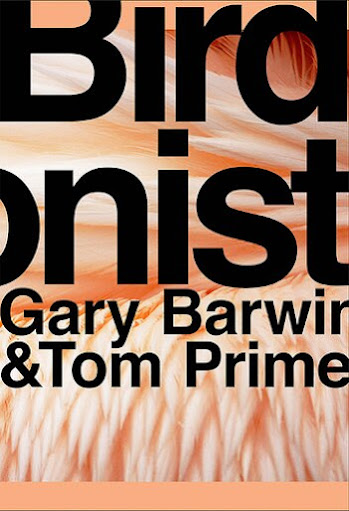 The second full-length collaboration by Hamilton writer Gary Barwin and London, Ontario poet Tom Prime, following their collaborative full-length debut, A CEMETERY FOR HOLES, poems by Tom Prime and Gary Barwin (Guelph ON: Gordon Hill Press, 2019) [see my review of such here], is Bird Arsonist (Vancouver BC: New Star Books, 2022). This is, in fact, a third full-length collection for Prime, as his solo debut appeared last year, his Mouthfuls of Space (Vancouver BC: A Feed Dog Book/Anvil Books, 2021) [see my review of such here]. Noted in the press release as a collection “[w]ritten with four hands,” Bird Arsonist is composed via short bursts of language across a dense and surreal landscape of collaged and distorted words, sound shapes and images. Twin-penned, one might say, and composed through the one mind between them, Bird Arsonist displays a language of sound poetry shaped to the page, writing poems that play with the distortions of meaning, image and sound. There is such a delight displayed through these bursts of speech, as the second half of the sixth and final poem in the sequence “Fair Semiramis” reads: “Alphagetti skinhole / still-housed a mega-church / crusty Hubble / the dictionary purrs / beards [.]”

It might seem that Barwin’s collaborative game came out of nowhere only recently, but he’s been engaged with a variety of collaborative works for years (although he has stepped up his game). Some of his collaborative works over the years include the full-length collections Frogments from the Frag Pool (with derek beaulieu; Toronto ON: The Mercury Press, 2005), The Obvious Flap (with Gregory Betts; Toronto ON: Book*hug, 2011), Franzlations: the Imaginary Kafka Parables (with Craig Conley and Hugh Thomas; New Star Books, 2011) [see my review of such here] and the collaborative novel The Mud Game (with Stuart Ross; The Mercury Press, 1995), as well as chapbook-length collaborations with Alice Burdick, Amanda Earl, Tom Prime and even myself.

There is something of Vancouver writer George Bowering’s “baffle,” a name he used to describe an external structure utilized for the sake of composition, but for the combined entity of Barwin and Prime, the structure here is one that plays around the meaning that words can’t help but retain, set against each other in unexpected and unusual ways, and how words, narrative and sound interact to form the shape of meaning. In certain ways, these poems lean less into the layers of comparatively-pure surrealism of A CEMETERY FOR HOLES, moving instead into a series of gestures of guttural speech, pushing a surrealism wrapped around a playful, joyful sequence of contortions, cross-outs, interruptions and explosions. “ate their hot facepalm / the hot-wired egg therein // I ruddied / bandaged,” they write, to open to the poem “Prior Tongues,” “the midnight feed-hole / compression bed / furtive, boiled as glands [.]”