Cedar Sigo, All This Time

Presenting—Star Time—David Meltzer
and the Famous Flames, lovely healer and
hologram, avenger of the blood who could
read for hours, when the children’s faces
followed him upstairs, the dog would bark
The fire spit funerary songs
A smoke of tiny feathers
that we know nothing and gladly say so (smiling)
that a prince is sometimes left to trace and dig and paste
asking after my poems, qualities of transmission
and who had I been listening to? I might say
Lady or The Misty Miss Christy
Carmen meaning McCrae or Leontyne
Price, either way, he was always
right there and shot through, 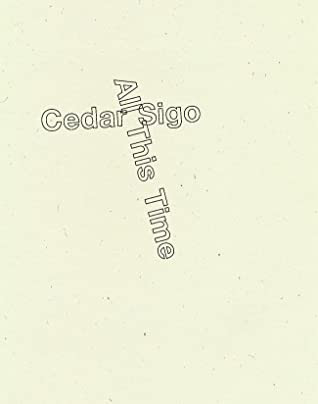 The latest from Lofall, Washington poet, critic and editor Cedar Sigo is the poetry title All This Time (Wave Books, 2021), following close on the heels of the remarkable collection of essays (that I’m still working through) Guard the Mysteries (Wave Books, 2021). Sigo’s poems are first person examinations and explorations on living, thinking, reading and being. The press release compares Sigo to a contemporary Frank O’Hara (via a quote by Ron Silliman), composing an “I did this, I did that” kind of first-person lyric, one that engages with the writers and artists within his immediate circle, and there is certainly that, but Sigo’s poetic is one that engages deeper with those poets he references. The references aren’t set simply as references or simple interactions, but composed as deep, and even foundational, engagements with the work of those he cites, including Diane di Prima, Larry Eigner, Tom Clark, Amiri Baraka, Charles Olson and Joanne Kyger. “Larry Eigner’s words,” he writes, to open the poem “Surface Waves,” “Like golden / flies / stuck in / a loom—made / to fall / with sudden / strumming / they sound, separate / distinct [.]” These are poets clearly important to his reading and ongoing poetic. Sigo edited Joanne Kyger’s There You Are: Interviews, Journals, and Ephemera (Wave Books, 2017), after all, so the repeated instances of her name throughout are hardly one of name-dropping, but in openly engaging with the work of his mentors, forebears and influences, and there is very much the sense of both engagement and homage through these references. I would even argue there’s far more of a Joanne Kyger influence, and even Larry Eigner influence, throughout this collection than anything out of Frank O’Hara, especially through the accumulation of staggered, first-person journal-entry short lines. Not that one needs to know of the source material to enjoy these poems; Sigo’s offerings are truly his own, although it does open a window into his thoughts on these other writers. Paired with this, as well, are poems composed as dedications to some of his contemporaries (including Joy Harjo, John Godfrey, Ed Berrigan and Julien Poirier); any writer’s work exists in conversation, or at least response, to the works of those around, so I’m simply pleased to see Sigo’s engagements acknowledged so directly. He is, as any good writer is, writing from within a particular and uniquely blended melange of books, writers and community interactions.

Elaine should be the poet in a cage (booth) at the LA art-book fair
or better yet, bill her as a prizefighting Jean Harlow

in a slightly bloodied V-neck blouse
and green-gold pyramid cuff.

“Just write what’s going on around you. Outside and inside.”

I think of this as a statement on sustaining a viable rhythm within the poem.

The poem is the only hem (the only field?) that Joanne has to land upon. (“Six Lines Missing”)

There are times these poems read akin to journal entries or quick sketches, almost Creeleyesque, perhaps, but clearly worked and thought carefully through. There are some sharp insights caught in Sigo’s lyric (and I would highly recommend his collection of essays, the first title of his I’d actually seen; a book I clearly haven’t dealt with properly yet via review), one paired with, and even strengthened through, a lovely, easygoing craft that engages clearly and thoughtfully through the prose sentence and lyric form. And yet, this book refuses any consideration of showy or performative, allowing itself, akin to the work of his fellow Wave-poet, Joshua Beckman, a clarity of pure ease of meditative thinking: a poetry that simply and beautifully is.