Michael Trussler, Rare Sighting of a Guillotine on the Savannah 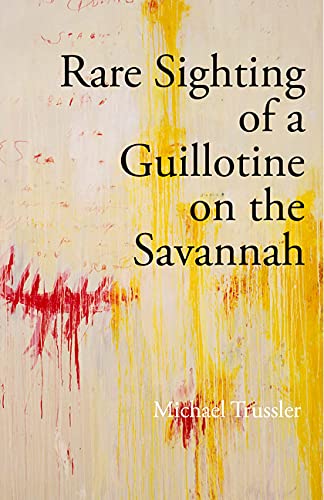 I’m fascinated by the wide, slightly surreal narrative sweeps of Regina poet, fiction writer and critic Michael Trussler’s latest poetry collection, Rare Sighting of a Guillotine on the Savannah (Toronto ON: Mansfield Press, 2021). Following the poetry chapbook Melancholy Girl with a Sitar (Vancouver BC: The Alfred Gustav Press, 2020) and full-length Accidental Animals (Regina SK: Hagios Press, 2007), as well as a collection of short fiction, Encounters (Edmonton AB: NeWest Press, 2006), Trussler’s Rare Sighting of a Guillotine on the Savannah offers a rush of expansive lyric propelled by that which only poetry might allow, including ruminations on what Leo Tolstoy might have thought of Marcel Proust’s In Search of Lost Time, to sketches around Rothko and Agnes Martin, and his recollections around the catastrophic eruption of Mt. St. Helen’s in May 1980. “I mean,” he writes, as part of “The Birds Now Suddenly Vanished,” “metaphysics / aside, I dimly remember // when Mt. St. Helens blew the day apart in Washington, but I didn’t know / then                                                     how / lava covered // Harry Truman and his 16 cats, his perfect bourbon / and coke, his lodge on Spirit Lake… [.]”

There is a curious layering effect Trussler employs in these poems, furthering an expansive narrative that turns and twists, offering the poem’s possibility through the sentence, as well as an interesting engagement with the ‘still life,’ exploring the narrative of the lyric to capture, possibly, the image of an idea. “Incoherence being the thread that joins us.” he writes, to open the poem “Everything Else is True.” In many ways, Trussler works his lyric as a form of exploratory thinking, seeking out his theses and thoughts as each poem unfolds, writing from a view that encompasses a wide range, from Saskatchewan rain to the Tokyo Marathon, translation to visual art, lettuce and the inflection of a child’s stomp. I’m enjoying the ease through which he shapes his explorations, shifting from lyric couplets to prose shapes and sonnets, seemingly very comfortable moving across form, including incorporating a variety of quoted texts to further propel both his arguments and narratives. Clearly, his years of teaching and academic work have provided him fuel, but not necessarily opportunity, for the explorations that drive his poetry, and his experience offers much insight, such as the prose piece “Zen and a Dinosaur,” a poem that opens “Home is what travels through us.” Further on, the poem reads:

Looking around the busy sunroom, this younger self would see that books have remained important. There are hundreds of them, in shelves and piled on the floor. Literature (poetry mostly), others on ecology, art history, philosophy, five or six concerning addiction, and an entire bookcase devoted to the Holocaust. Art postcards on the walls, binoculars on the desk facing a wall of windows, and a large photograph of a woman’s bare feet with the words welcome home painted on her toes. A stationary bicycle. Oddly, a few Polaroids. That both rooms are painted the same yellow is uncanny (not that he’d use this word): on the one hand, it feels exactly right, but, on the other, it’s slightly disturbing: don’t one’s tastes change or develop over time?