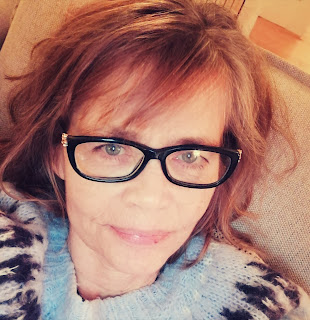 Anna Dowdall was born in Montreal and recently moved back there after living all over North America. She's been a reporter, a college professor and an urban shepherd, as well as other things too numerous to mention/best forgotten. She first tried her hand at YA fiction. She was nominated for the US Katherine Paterson YA prize and for Canada's Arthur Ellis Award in the unpublished category. After being told by an agent that her words were too "big" for YA, she switched to adult fiction. Her novel, APRIL ON PARIS STREET, is a bittersweet literary mystery tinged with black humour. Her well-received previous books include AFTER THE WINTER and THE AU PAIR.

I don’t think After the Winter changed me much, except that it was like finding a key to a lock, especially after the good reviews.  April on Paris Street, coming out this fall, is definitely a game changer. I took deliberate and substantial risks with the mystery genre, with an unusual plot, unusual roles for the female characters, black humour and even some postmodern themes/embellishments you can take or leave. The legendary Guernica Editions picked it up and I’m still pinching myself.

I like stories, to tell and to read and listen to.  But poems can be stories too.  I’m too lazy to focus on non-fiction, all that fact checking.

I write fiction the way I used to write government policy reports.  Haha. But true.  Lots of careful prep and planning, and then the writing is smooth.  It might take me 6 months to churn out a polished first draft, and 2-3 months for reworking.  But several months of planning and tergiversating might have gone into that.

A very simple idea, usually borrowed from a book or film or even real life, and then I drag it wildly off in my own direction.  For example, the germ of the idea for April on Paris Street came from an interest I had in combining Montreal and Paris as settings in a book.  I just thought it would make for a fun read.  Like a tale of two cities, I said to myself—and the filing cabinet of my mind promptly exploded with doubles, doppelgängers, splits, masks, twins, duplicates, impersonations, dual solitudes and other unreasonable facsimiles littering the place.  I’ve pretty much described the symbolic structure of the book, but it’s also a suspenseful Thelma and Louise style mystery adventure in which, however, women come out on top. The Au Pair, my second book, was based on the urge to retell the story of the sketchy relationship between Henry and William James and their sister.  And After the Winter was the answer to the question, how good could a disguise be?

With my fake extravert face in place, I tell myself I like meeting my readers.  Twice, at Word on the Street Toronto, I actually sold out my books, and the competition there is pretty stiff.  I was like one of those telemarketers, or that terrifying pushy parent we all remember from our child’s figure skating.

I write semi-literary mysteries set in Quebec.  My preoccupations include women living in a man’s world and what happens when women come up against the justice system.  And then, since I like to plumb commercial fiction conventions in relation to these oh-so-lofty themes, how much can I get away with, aka how stretchy are the conventions?

Don’t get your writing ideas from the internet.  Especially memes, gifs and short sentences in quotation marks attributed to Hemingway and Stephen King.

In active writing mode, I write according to a schedule.  Monday to Friday, all morning.  When I worked FT, I devoted a full day off every week to it.

I don’t really get stalled.  Even if I don’t feel inspired, or the cat woke me at 5, the little jerk, I tell myself it is what it is and carry on.  Write you must.

Heat-scorched zinnias growing by the back door.  Also burnt toast (we had one of those little manual flip toasters.)  In keeping with the spirit of the question, I’ll add that the echoing halls of our post-war box were haunted by these odours.

Books, mainly, and of course let us not forget my demons.

It’s hardly a coherent group, but Ursula Curtiss, Mervyn Peake, Rebecca West and, especially, Constance Beresford-Howe.  It drives me crazy that we Canadians don’t read more Canadian books.  We are brainwashed by American mass consumerism.  I feel choosing insistently Canadian settings is an act of resistance, but it probably costs me readers.  I’m really glad that Crime Writers of Canada has a new book prize, sponsored by the family of Howard Engel, for a mystery set in Canada.  Someone had to do it.

I want to go to the Frankfurt Book Fair and talk my way into film and translation deals by channeling my inner annoying figure skating parent as per question 5.

At a guess, my runaway imagination and my zinnia-growing mother’s frustrated ambition to be a writer.

I’m on a BIG Anthony Trollope kick right now.  I loved Phineas Finn.  I might like The Eustace Diamonds even more when I get to it.

I just completed the first draft of my 4th book, but have set it aside to concentrate on pre-launch marketing for April on Paris Street.  So right now I’m working on things like luring people to Netgalley to provide early reviews.  Did you know that books up for review on Netgalley are free to read?  As for the mysterious book 4, suffice to say that if you like the Sister Pelagia series by Boris Akunin, you will like this one.  Also, I have strayed into magic realism.  Magic realism crime.

Posted by rob mclennan at 8:31 AM
Labels: 12 or 20 questions, Anna Dowdall, Guernica Editions