ruled by appetite
i wanted to write

a truth from the
whole

of the scratched-
out line

between what you
call mine

what counts as
your body

and what’s a
depository

for Roundup   Teflon
sphenol A

Bay Area, California poet and editor Angela Hume’s [see her 2016 “12 or 20questions” interview here] second full-length poetry title, following Middle Time (Oakland CA: Omnidawn, 2016) as well as a smattering of chapbooks [see my review of her most recent here], is Interventions for Women (Omnidawn, 2021). Through an accumulation of six sequences, themselves composed as accumulations of short, lyric bursts, Hume sketches one phrase on top of another, writing on the impact of the world on women’s bodies, from climate to agriculture, settler colonialism and sexual violence, white supremacy to genetic engineering on food, writing wave upon wave of interlocking, interconnected wave of assault upon the physical and spiritual body. Set in sections of extended, accumulative fragments—“may the human animals,” “interventions for women,” “drowning effects,” “you were there,” “meat habitats” and “say no”—each section opens with a brief introduction of sorts, situating the poem-section in very specific temporal and subjective spaces; she sets the scene, as it were, allowing her lyrics to open and expand from that singular point. The section “you were there,” for example, opens: “Oakland and Point Reyes National Seashore, California, 2017-2018. // I wrote this poem after the April 15, 2017, Berkely community demonstrations against white nationalist and neo-Nazi groups who staged a rally at Martin Luther King Jr. Civic Center Park, and also at the end of the 2011-2017 California drought.” The poem itself, begins:

out of the drought
and the dead land

beneath a shrill
unblinking cerulean

we’re all writing
this poem   i join in 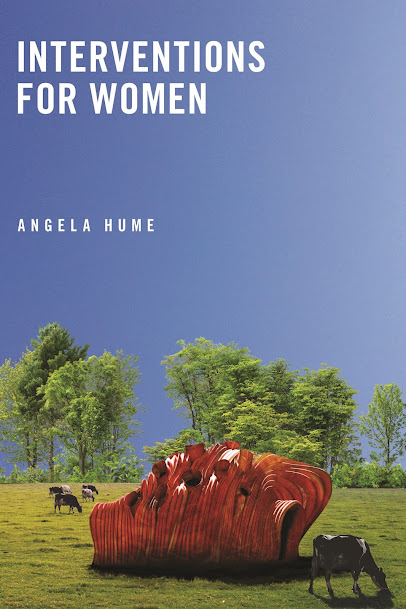 Her poems accumulate, phrase upon phrase, but exist almost as Jenga-towers: to remove one word or one phrase would be to tear the whole structure apart. The intricacy of her point-by-point is overshadowed, slightly, through the ease and flow of the lines, allowing her lines to sit on the page as a series of stretches, but amass in the readers’ attention as a singular structure.

Through these brief introductions to each section, Hume provides context and even boundaries to her poem-sections, stretching out her lyric across a broad spectrum. The communal aspect of the writing, “i join in,” as Hume offers, connects the work in Interventions for Women to a far larger movement of resistance, something comparable to, for example, Layli Long Soldier’s Whereas (Graywolf, 2017) [see my review of such here], as well as works composed-in-resistance to the Northern Gateway Pipeline in Burnaby BC, including Christine Leclerc’s Oilywood (Nomados Literary Publishers, 2013) [see my review of such here] and Stephen Collis’ Once in Blockadia (Talonbooks, 2016) [see my review of such here], and, more generally, various pieces in Nyla Matuk’s Resisting Canada: An Anthology of Poetry (Signal Editions/Vehicule Press, 2019) [see my review of such here]. The writing exists consciously and deliberately alongside and as part of a far larger movement and structure of resistance, offering support, critique and weight and a call-to-action. As the title sequence, second of the six, opens:

I wanted to write a poem about how the industrial food system alienates feminized people from their bodies, and how this alienation requires, colludes with, an exacerbates economic and racial oppressions along with the exploitation of animals. And about how the industrialization of agriculture has been more or less coextensive with the development of modern institutions and technologies for the surveillance and control of the intimate body activities (eating, fucking, reproducing) of women and girls.

While “interventions for women” addresses global food systems and hunger, along with the state and NGO approaches to naming systemic failures, its focus is on settler food production and eating in the United States. There is much more to be said about the violence of the food system internationally, not to mention everything else.

I wanted to say that I intend the title ironically.

Posted by rob mclennan at 8:31 AM
Labels: Angela Hume, Omnidawn