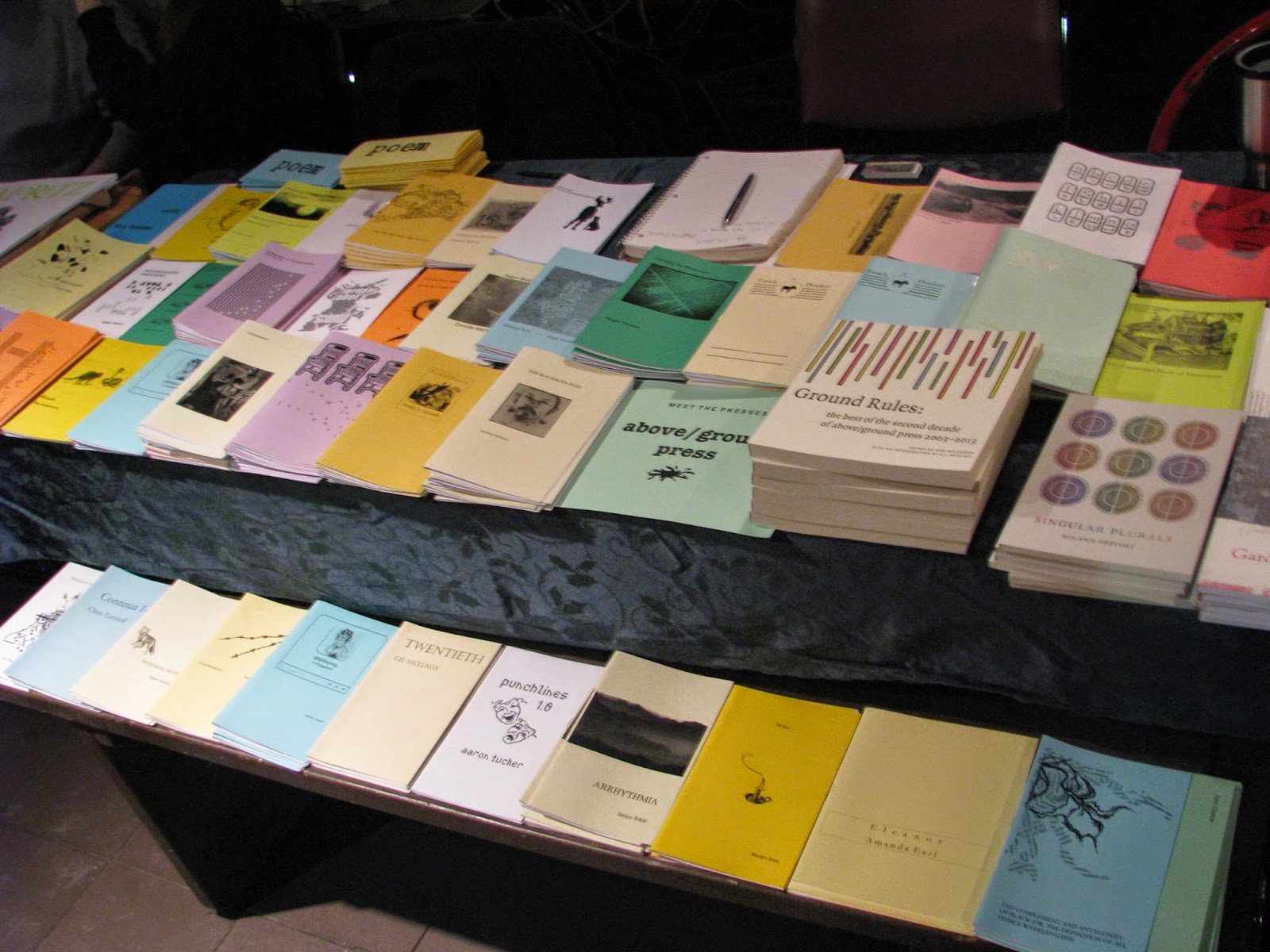 On November 22, 2014, above/ground press participated in our first ever Indie Market in Toronto, hosted by Meet the Presses, and had a magnificent day! We’re hoping we might even be invited back, possibly. And of course, there was far more than this at the fair that I was able to pick up (and even more I didn’t get a chance to get near). So many amazing publications! There is simply never enough money, and never enough time.

Already there are a couple of post-fair reports online by others, including those by Ryan Pratt, Kate Sutherland and Stuart Ross, as well as a photo by/of Lorette C. Luzajic; given that I currently work at the whims of the wee babe, perhaps I’m lucky to get mine posted at all.

London ON: I’m constantly amazed by at least one title by Baseline Press every season, and the crop this time ‘round included the new chapbook by Montreal writer Sarah Burgoyne, Love the Sacred Raisin Cakes (2014) [see my recent review of her previous chapbook, here]. Unlike the prose-works of her previous chapbook, Love the Sacred Raisin Cakes is a small collection of more traditional-looking lyric poems, yet poems rife with narrative longing, from the stretch of the title “his death left no capital of the world, neither here / nor anywhere else,” “prophecies of my youth fulfilled but not in the way / one expected” or “it was not in parks that i learned humility,” many of which, her acknowledgments tell us, are borrowed “from lines of Czeslaw Milosz’s poetry.” It is as though each title clears the way for a narrative framing or thread merely hinted at within the body of each piece; as though she writes each poem not to tell a story, but to suggest, and even fragment. Even her poems want to tell you stories, which she responds to by breaking them down into smaller, disconnected portions.

the word revealed out of darkness was   pear

someone has been writing
on your perfect menu

in the basement
you brew tea
and a list of rebuttals

the fruit was bold
to appear that way
you think

and no one prepared
for the smaller wars

LaFarge WI/Hamilton ON: From XEXOXIAL Editions, comes Hamilton writer and composer Gary Barwin’s “the wild & unfathomable ways” (2014), produced as the fifty-eighth issue of Xerolage. The description of the journal reads: “Visual poetry, copy art & collage graphics, each issue devoted to the work of one artist. Xerolge is a word coined by mIEKAL aND to suggest the world of 8.5 x 11 art propagated by xerox technology. ‘The mimeo of the 80s.’ The primary investigation of this magazine is how collage technique of 20th century art, typography, computer graphics, visual & concrete poetry movements & the art of the xerox have been combined. 8.5x11, 24 pages each. Subscriptions $24/4 issues. For overseas delivery, add $15 for airmail printed matter.” 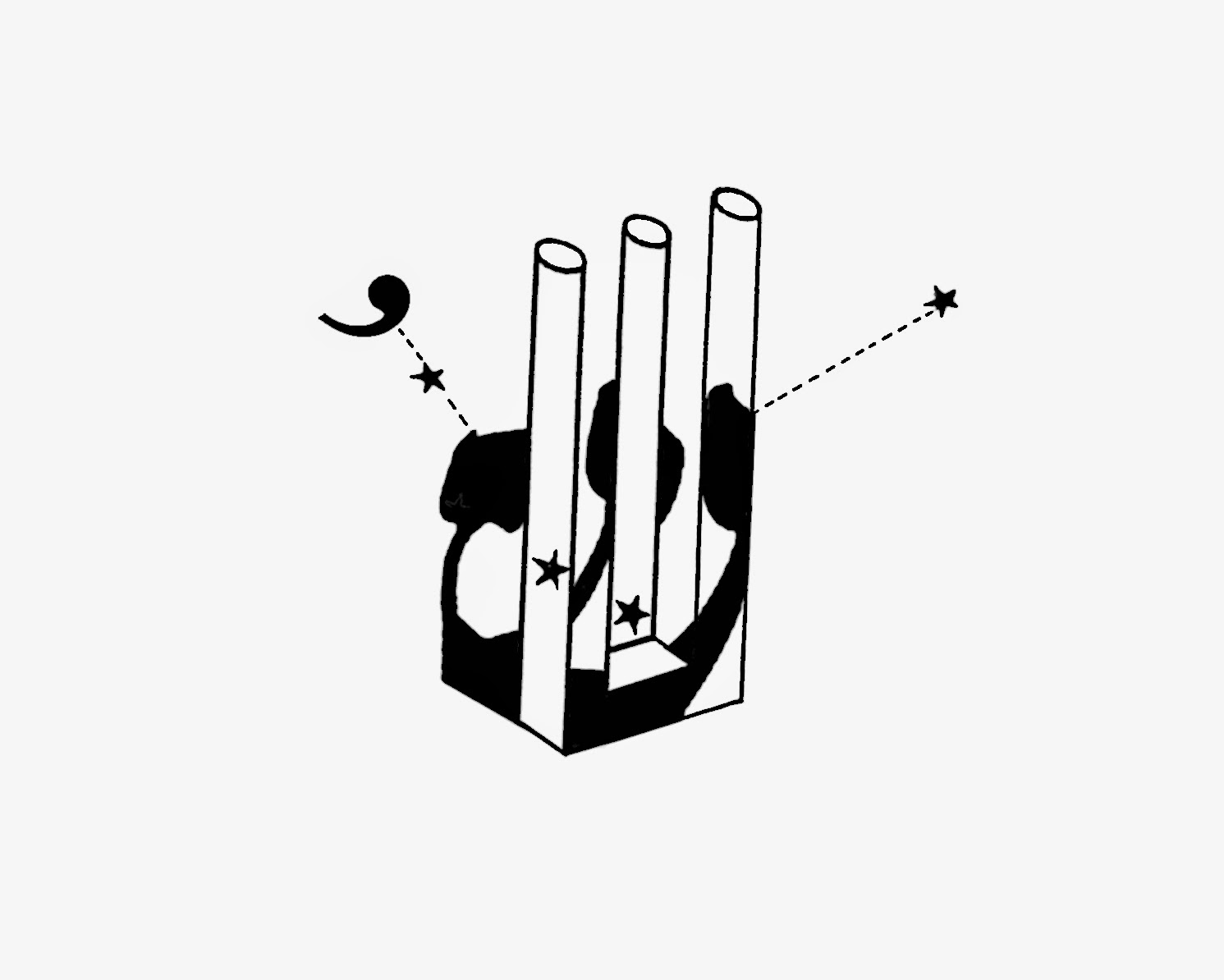 [the poem above is reprinted from NEWPOETRY] There is something of Gary Barwin’s concrete and visual poetry that has been developing over such a long period that it feels as though it has always existed, and hasn’t been appreciated nearly enough. Given his work as a lyric poet, fiction writer and composer of music, the thread of his wonderfully playful and inventive letter-poems deserve far more serious consideration and appreciation than what has occurred so far. It’s curious to see: derek beaulieu might build some of his visual and concrete poems (specifically, the letraset poems) using the individual letter-forms themselves as building-blocks, but Barwin’s attention is far more specific, often focusing on a single letter or character or two, and making the slightest, smallest twist. Might a selected works be in the cards, possibly? I really think a healthy collection of Barwin’s visuals is seriously required, with a good-sized critical introduction.

Vancouver BC: Given that it won this year’s bpNichol Chapbook Award (announced mid-day during the 2014 Indie Market), I suppose I’m rather late on getting to the party on Vancouver poet Christine Leclerc’s Oilywood (Nomados Literary Publishers, 2013), a title that has actually been sitting on my desk for some time.

We listen to water.
We go float in it.

The ocean makes us giggle.
We giggle when we’re in it.

But no matter how advocacy demands
our sketches, the future is far from
shapeless—already flush with months,
minutes and—

—
assholes. It has power, movements,
press releases. And it’s full of sound-
tracks to make you feel you’ve just seen
a movie, like your life is something—

Composed as a reaction to the Kinder Morgan Pipeline pipeline debate and protests, the collaborative structure of Oilywood was discussed recently in an article in the University of British Columbia’s campus newspaper, The Ubyssey, written by Jamey Gilchrist. As Gilchrist writes:

“One of the idea’s was to put a giant “Oilywood” sign on the North Shore mountains as that image would act as a mirror to the Hollywood hills sign and its associations with a pro-development and a pro-oil stance that we are seeing in Western Canada and around the world,” said Leclerc.

Leclerc found inspiration for her poetry when she spent a summer around different regions of the Burrard Inlet. During her time there she went to the beaches, collecting interviews, pictures and water recordings. She noticed how many people spent their time there and if they knew about the proposal to expand the pipeline significantly. This curiosity led to community workshops where “people were asked to write down some memories and knowledge about the inlet on a rough map. These sorts of community input[s] were used to create the chapbook, in addition to Kinder Morgan news releases,” said Leclerc.

I’ve long been aware of a grouping of poets and poetics in Vancouver specifically, and British Columbia generally, engaged in their immediate social and political concerns in a way I don’t really see happening (certainly not at the same level, if at all) in the rest of the country. Given the recent protests around the pipeline, writers, academics, poets and many others have jumped feet-first into the fray, living their politics in a way that has deeply impressed me, and even made me challenge my own actions—how does one attempt to further live and act in ways that might actually affect positive change? Leclerc’s sixteen-section Oilywood is reminiscent of another Vancouver poet’s work, Cecily Nicholson’s From the Poplars (Vancouver BC: Talonbooks, 2014) [see my review of such here] that also worked, via a poem constructed out of a collage of sources, including archival and interview, to document the activities of a particular a geographic space (albeit over a far longer stretch of time) and the actions of outside interests that attempted to profit from actions that not only occupied but devastated that same space. Can a poem affect change? Perhaps it can, if it forces open a conversation. One can only hope.

For me, the saddest thing about being
human is the—

It’ll be weird to be like, remember the
polar bears? Or, remember when we
would swim here?

I’d be traumatized if I couldn’t go to
the beach. I mean, people pay stupid
amounts of money to live here. It’s not
like the nightlife is tops in Oilywood.

It’s not like there’s tons of jobs here,
or so much stimulation.