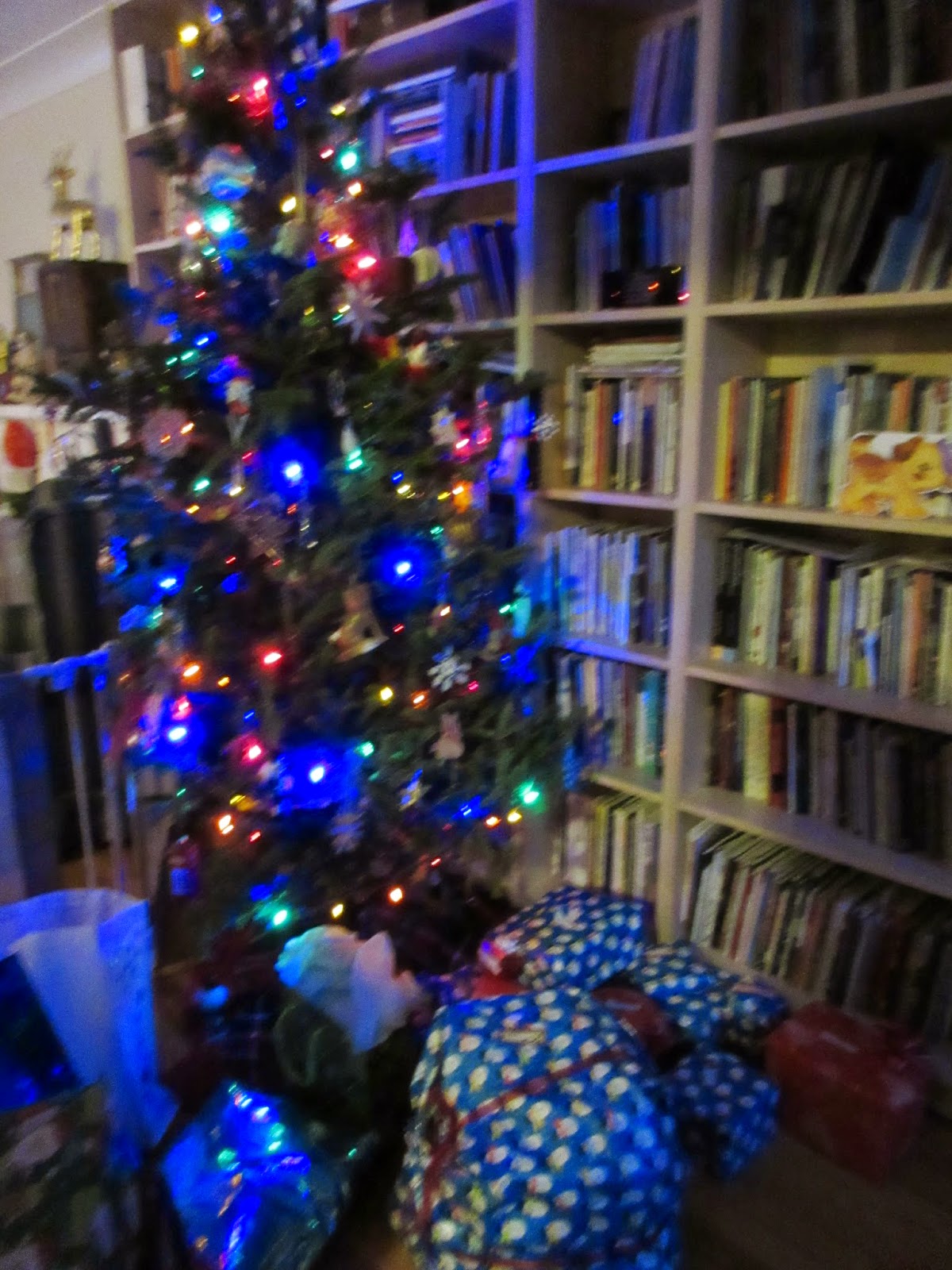 Given father-in-law was good enough to gift a camera this year, I was able to take pictures far better than the ones from Montebello [see my pre-Christmas Christmas post from Montebello, here]. Here you can see our lovely tree, for example.

December 24, 2014: This was my first non-Glengarry Christmas [see last year's, for example, here], deciding some time ago that it was perhaps our turn to host, given the fact that we now have the space. In our usual tradition of McLennan gathering on Christmas Eve Day for dinner and gifts, we hosted my sister and her brood, our father, and my elder daughter, Kate, all of whom arrived for a big turkey dinner prepared by myself and Christine (even with the fact that she worked half a day on Christmas Eve). It might have seemed like a lot, and yet, it wasn't--I spent Monday morning doing all of my baking (two apple pies and various cookies), and made scalloped potatoes in the slow-cooker, allowing the bulk of the work to be spread out over such a period that none of it felt overwhelming. 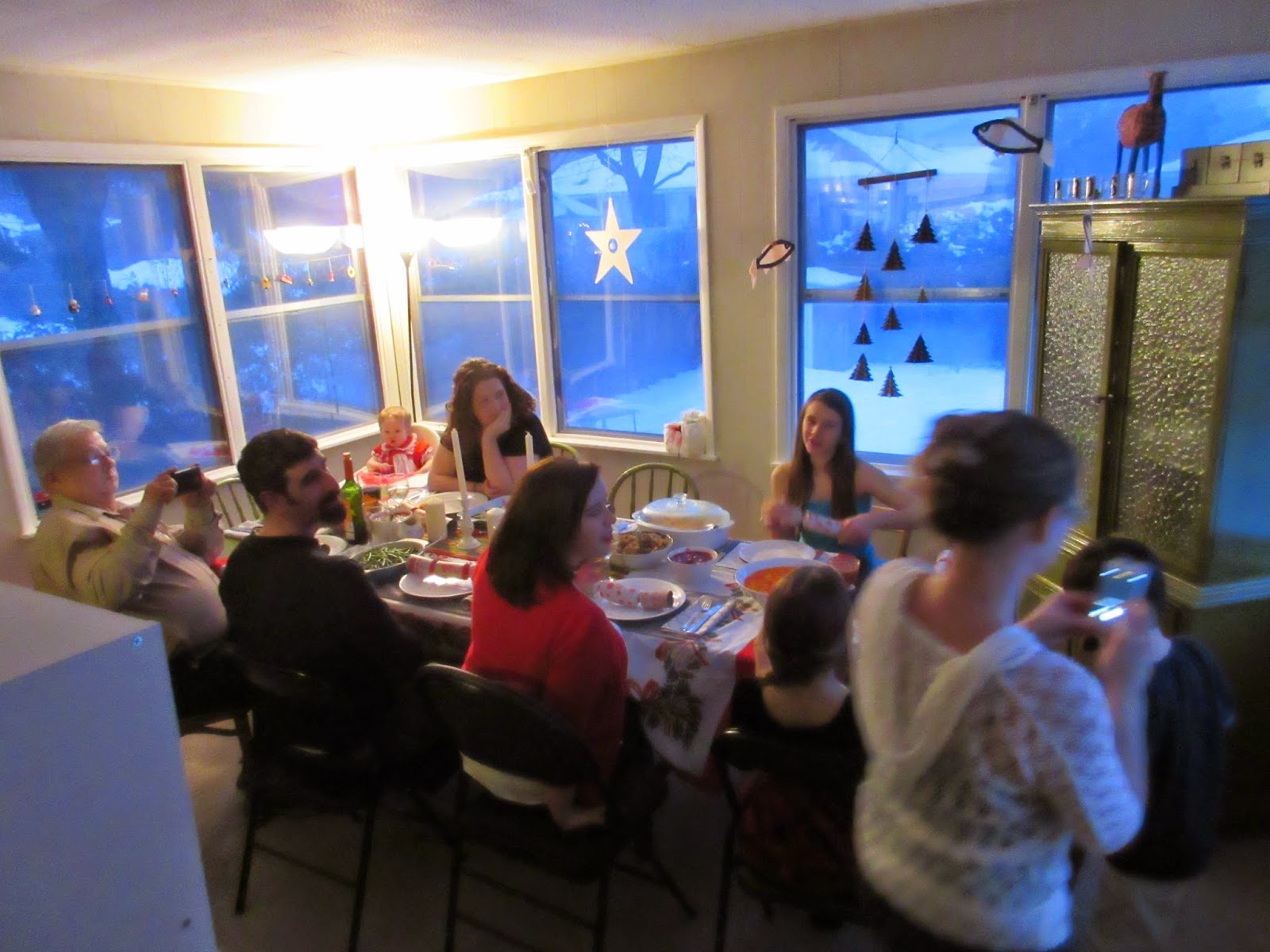 Apparently Christine isn't familiar with the tradition of jellied salads. Her mother suggested it was "very British," but I know we've always had it. My father loves it.

And then, of course, crackers: I spent far too long at the store worried about which ones to get (the ones I ended up with were fine): overwhelmed with options, it was nearly too much.

This year was far more entertaining than last year, simply for the fact that Rose is now big enough to actually enjoy what is happening around her. And she not only loves hanging out with her cousins, but it is quite wonderful to see how she and Kate get along (rather famously, I would say). I would have taken more photos of the day, but it isn't always easy when one is hosting. 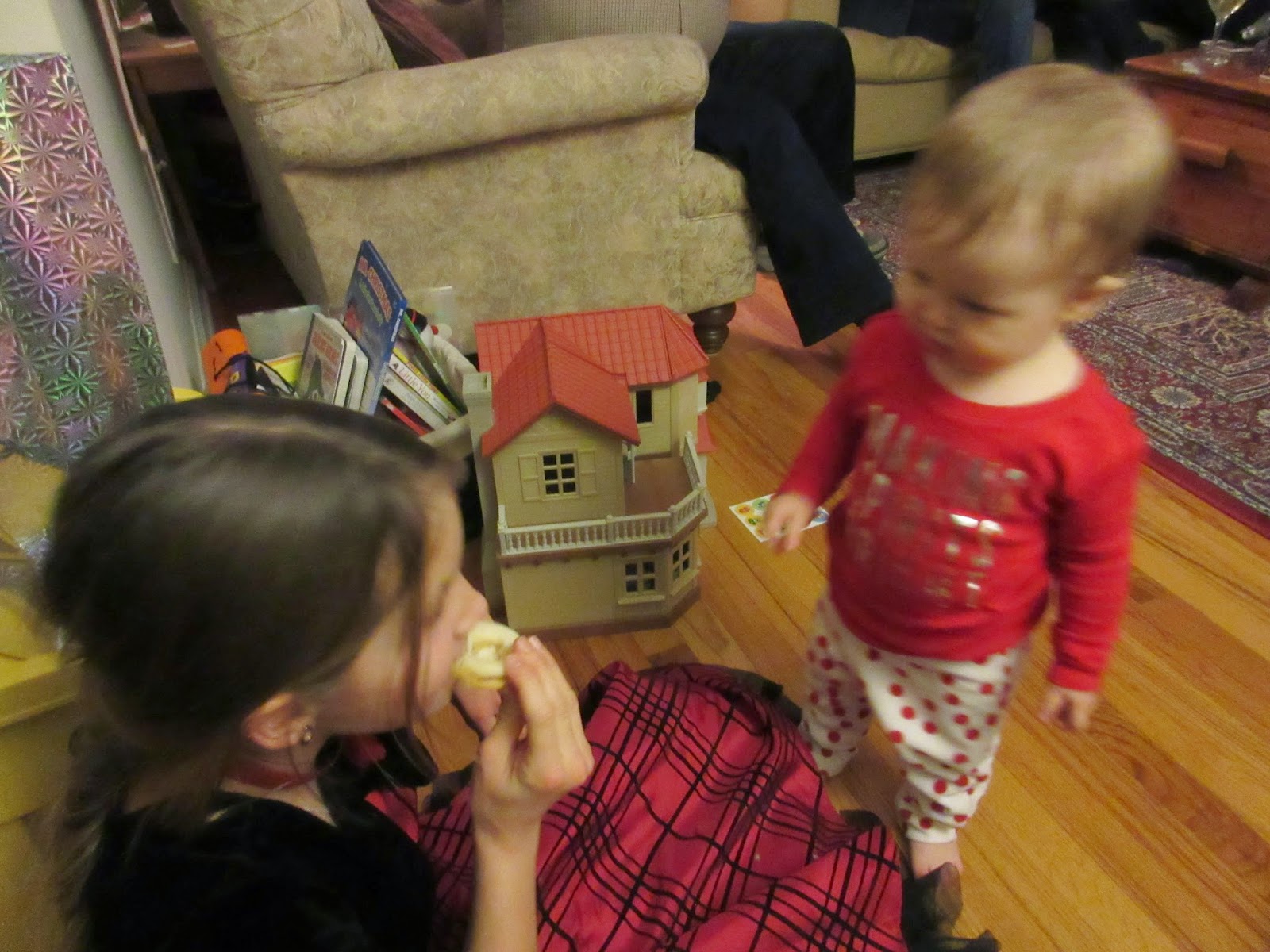 We had dinner, presents, conversation and drinks. Kate even helped Rose have her evening bath. And then three days of half-heartedly cleaning the house, again (there wasn't much, post-Christmas; we were just worn out). December 25, 2014: Christmas morning was stockings for Rose and Kate, and a couple of presents that Christine wanted to save for the wee babe. We lingered with coffee, and Rose tore at wrapping paper. But not for long. We delivered Kate home, for the sake of her own household Christmas, and arrived at mother-in-law's house for the traditional eggs benedict and mimosas that Christine loves so much. Some traditions we can't do without. Her brother was there also, with wife Alexis and newborn(ish) Duncan, who Rose is still adjusting to. She keeps attempting to smush his face, when she isn't hugging him or kissing his face or head (she has yet to learn "gentle"). And then another big dinner, with Christine's Uncle Richard and Aunt Marie-Paul. There were even a series of photos (which I have not yet seen) of Rose and new cousin Duncan together in their matching Hudson's Bay sweaters, in which she leans over to hug him. Why did I not take more photos?