Stephen Collis, Once in Blockadia

Then we were all engines. Someone asked, how will you get to work or wherever? Like the possible was always equivalent to the available. We were not only saying no. Was it really so strange to decolonize on camera? Only if the Sun news reporter tells you to GET A JOB. Nobody likes it but what are you going to do about it. Machine says, no cross this line. It doesn’t happen all at once – it is between the frames and it is internal to the social process of collective individuation and it is a firefly lit in the dark and it is ongoing in the soil, perc and leach field, mushroom explosion at borehole number 1. We are engines of change, component parts, aqueducts. NGOs mansplaining at the police line, someone said they mounted a cavalcade of photo-op arrests. That’s harsh – we all wanted to delete certain processes – to say fuck this under or over our varied breaths, smile at bypass of yellow tape, sacred fire. What is Carboniferous after all? The engines behind the blockade were carved cedar, raven-winged, and reaching as militant flesh across the metabolic rifts we were – back in time and forward in time, lifting material from the forest to be a barrier to human stupidity.

Vancouver poet, editor, fiction writer and critic Stephen Collis’ Once in Blockadia (Vancouver BC: Talonbooks, 2016) is one of the most striking examples of political poetry I’ve seen in a while. As the back cover informs:

Called by Eden Robinson “the most dangerous poet in Canada,” Stephen Collis was sued for 5.6 million dollars by U.S. energy giant Kinder Morgan for opposing the Trans Mountain pipeline expansion. The lawyers accused his words of bearing instruction: “underneath the poetry is a description of how the barricade was constructed.”

Composed of “two long sequences evolving from found texts, and two long poems that engage with Wordsworth,” Once in Blockadia is Collis’ sixth full-length poetry collection (not including his collaborative Decomp with Jordan Scott) and, in what could easily be considered his strongest collection to date, solidifies his ongoing engagement of social critique through poetry. As he warns in the first section: “The future has never meant so much to us [.]”

talking to shut down 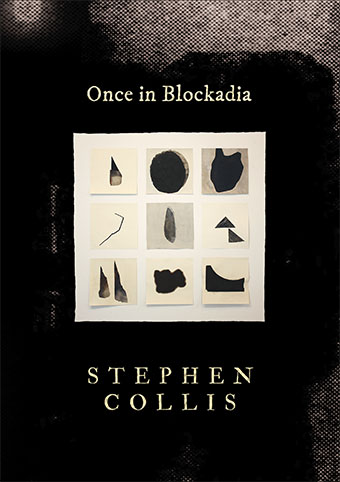 Given that excerpts of his poetry, thanks to Kinder Morgan, were included in court documents against him, one might argue that the oil company in fact elevated the status of those words, and become a rarity in Canadian poetry – words that have had a tangible, concrete effect – and this collection is a result of both his actions and their reactions. As a contemporary poet, Collis’ aren’t simply words thrown into an empty space (as so much poetry is described as doing: “poetry makes nothing happen,” etcetera), but, through an ongoing activism, words that found their mark, and were seen by a powerful company as threatening, causing them to respond with a lawsuit. As he writes in the poem-section “Home at Gasmere”: “How often do we hear / That there is no other choice [.]” To open his notes and acknowledgments, Collis writes that this collection “has gone through many transformations before assuming its present form. It began as a book walking in the restricted spaces produced and/or threatened by resource extraction […].”

Composed as a blend of long poems, transcripts and essay, Collis’ Once in Blockadia is, as Fred Wah remarks on the back cover, one of “poetic resistance.” While the three volumes (to date) that have made up his ongoing “Barricades project” – Anarchive (New Star, 2005), The Commons (Talonbooks, 2008/2014) and To the Barricades (Talonbooks, 2013) – have cohered and articulated language as an element of social action, Once in Blockadia is denser and more focused, composed as much as a cudgel and a call-to-action as a communique on or consequence of the Trans Mountain pipeline. In his 2016 interview over at Touch the Donkey, he spoke briefly to the idea of what poetry can accomplish:

I’ve thought about this – spoken and written about it – quite a bit. The short answer to “what can poetry accomplish,” politically, is – not much. Poetry is something I do while doing other things – it’s a skill set (such as it is) I bring to the social movement activities I’m involved in, just as someone else might bring cooking skills or building skills. Politics is performed by being talking and doing things together, and poetry might find a small role in that. I like Lisa Robertson’s formulation from NILLING, where she focuses on the politics of the address. We could also approach this via the importance of the call (to action, to resistance, to assembly) that the Zapatistas placed at the centre of their project (Howard Caygill, in the book called ON RESISTANCE, is really good on this, though many others have written about it too). So while poetry is the vehicle through which I think, and the vessel of my daily life, its facility to propose imaginative addresses (in my work, to and from the commons) and calls (from all to any) are its significant political role. This is something akin to “inspiration” (so the poem might be called upon to introduce a meeting or event or an action), but I would prefer Caygill’s term “capacity building”: poetry can be one thing that builds social capacity. Other things do that too (feeding people, counselling them, etc.). So I think there are limits to what poetry can do politically, but I do take seriously the (however limited) contribution it can make.

I am fascinated, also, in the way that Collis writes in response to and around William and Dorothy Wordsworth, blending poems and journal entries by them both with current political advocacies and actions, as he writes:

Walking – we were seeing
Silvered shunts of sand lakes
Like salt flats wondering what
Winkles out in yonder mercury
Sheen? No ponds pretend to
Lighten belief – air cannon and
Scarecrow miners surround
These tailings are desolation’s
Dream of crumbling décor
Whoever it was saw boreal
Swept it clean in cold accounts
Before land wastes were
Fenced former forests of sand
Thick dark thoughts leaching
Heavy metal music machines

Posted by rob mclennan at 8:31 AM
Labels: Stephen Collis, Talonbooks

An interview with Stephen Collis can be heard here: http://paulenelson.com/2017/03/07/once-in-blockadia-stephen-collis-interview/