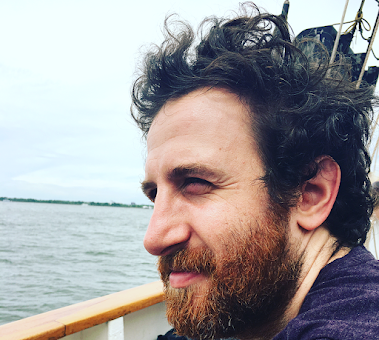 Jason Schwartzman is the author of No One You Know: Strangers and the Stories We Tell, released by Outpost19 in May 2021. His writing has appeared in the New York Times, New York Magazine, Narratively, The Rumpus, Hobart, River Teeth, Human Parts, and elsewhere. He’s a founding editor of True.Ink, a revival of the classic adventure magazine. You can find him on Twitter @jdschwartzman and more of his writing on jdschwartzman.com.

1 - How did your first book change your life? How does your most recent work compare to your previous? How does it feel different?
No One You Know has only been out a few weeks so it feels a little early to measure. But generally, I feel…lighter. I wrote the first draft of this collection six years ago, so it’s been with me a while. At a certain point, I was beginning to doubt it was going to happen, but then it did, and now it’s here! One early return: it feels easier than ever to call myself a writer without hedging in some way.

Because of that long time horizon, the book feels curiously recent and previous. It collects sixty or so encounters I had with strangers (of varying degrees) and uses them as a vehicle to tell stories about personal mythology, identity, and the distance between people. Ultimately, it asks: what does it mean to really know someone?

2 - How did you come to fiction first, as opposed to, say, poetry or non-fiction?
No One You Know is nonfiction, and I’m primarily a nonfiction writer. I’ve been a regular in that realm from the days of being assigned personal essays in high school English classes through working as a journalist and a magazine editor. I've always felt most energized when I had a weird (true) story to tell.

3 - How long does it take to start any particular writing project? Does your writing initially come quickly, or is it a slow process? Do first drafts appear looking close to their final shape, or does your work come out of copious notes?
When it happens, it happens fast. Then there's usually a long process of chiseling and polishing. I savor the chance to lose myself in the fervor of drafting and revising and drafting more, the many, many versions of a thing until it feels right. You don’t always get that in life, 2nd and 3rd and 4th shots at something, so I appreciate the opportunity on the page.

4 - Where does a work of prose usually begin for you? Are you an author of short pieces that end up combining into a larger project, or are you working on a "book" from the very beginning?
I gravitate to shorter forms, so sometimes things start adding up. In the case of my book, it started as journal entries of uncanny encounters with strangers — ones I wrote down just so I didn’t forget them, with no book or anything in mind, really. As they accumulated, I noticed that the stories seemed to gain meaning by being placed next to each other. It was a time in my life when I was going through a break-up, but also finding connection with random people I’d met, so the idea of who was a stranger and who wasn’t began to blur. The book formed in answer to that unstable, murky continuum.

5 - Are public readings part of or counter to your creative process? Are you the sort of writer who enjoys doing readings?
After I subdue the nervousness that sometimes flairs up, I like reading my work out loud for an audience. It’s interesting to get to step inside my own story, in a way, and shake it to life as a performance.

6 - Do you have any theoretical concerns behind your writing? What kinds of questions are you trying to answer with your work? What do you even think the current questions are?
I’m often fascinated by the ways we come to know (or fail to know) other people and the ways we allow ourselves to be known. What stories do we choose to tell about ourselves? Which ones do we conceal? What assumptions and calculations are we making about others? What do we believe they’re concluding about us? Are there forces that are distorting our perceptions?

8 - Do you find the process of working with an outside editor difficult or essential (or both)?
My most trusted readers feel essential to my process. At some point, I need eyes on what I’ve written to more fully understand what it’s doing. To see my blind spots. To just get a reaction. That helps me keep moving forward.

9 - What is the best piece of advice you've heard (not necessarily given to you directly)?
One line that comes to mind is from Mary Ruefle, I think in Madness, Rack, and Honey. It’s something like: “you can never really finish a work — you can only abandon it.” It’s so hard to end something. Accepting that reality makes it more doable, though, since you know a perfect termination point is basically mythical. When I was finishing an early draft of my book, I was traveling alone, and the stranger interactions seemed to actually increase, almost as if in protest of completion. Abandonment was my only recourse. Of course, that was just a draft, so I did return to it later, but that took me to the next phase, and on, and on, until the book was sent to the printer and no more tweaks could be made.

10 - What kind of writing routine do you tend to keep, or do you even have one? How does a typical day (for you) begin?
I’ve almost never been able to write every day. I still aspire to that kind of discipline (and freedom) but beyond the era of writing the book, which was an outlier, I haven’t been able to or had the time. I’m hoping to be better about it. My typical day begins with other work, so my personal / creative writing needs to be wedged in whenever I can corral a few hours. Caffeine is a trusty companion, though. Music helps lure me into the mood. Otherwise, I try to just get on the bus when it comes.

11 - When your writing gets stalled, where do you turn or return for (for lack of a better word) inspiration?
Walking helps air out my mind. I’m also heavily reliant on showers. Movies have gotten me out of jams before. Sending email-letters is useful, too, since it’s a way to trick myself back into writing.

12 - What fragrance reminds you of home?
A sweet, earthy, onion-y smell. My family has always agreed on the magnificence of French onion soup.

13 - David W. McFadden once said that books come from books, but are there any other forms that influence your work, whether nature, music, science or visual art?
Aimee Mann’s songs were an influence on No One You Know. She’s so good on the trickiness of connection. Cause this show is / Too well designed /Too well to be held with only me in mind.

14 - What other writers or writings are important for your work, or simply your life outside of your work?
Maggie Nelson (Bluets), Lydia Davis (The Collected Stories), Speed Levitch (The Cruise), and Richard Linklater (Before Sunrise) are the ones that most immediately come to mind with respect to my book.

15 - What would you like to do that you haven't yet done?
That’s a long list. One thing is to collaborate with my partner on a homemade, single-copied picture book that we give to our kids someday.

16 - If you could pick any other occupation to attempt, what would it be? Or, alternately, what do you think you would have ended up doing had you not been a writer?
Plumber. I hear there's gold in the pipes.

17 - What made you write, as opposed to doing something else?
Writing is a mode of thinking for me, so it’s always something I’ve come back to on a personal level. A way to slow down and make meaning from things. Professionally, I like being around narrative. Searching for it, shaping it.

The Wedding Plan directed by Rama Burshtein. (It’s more original than it sounds.)

19 - What are you currently working on?
I’ve got an essay cooking about having the same name as a famous actor that gets into questions of identity.

Posted by rob mclennan at 8:31 AM
Labels: 12 or 20 questions, Jason Schwartzman, Outpost19