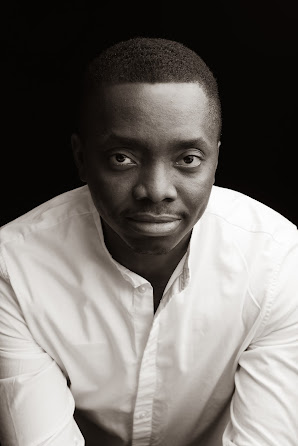 Tolu Oloruntoba was born in Ibadan, Nigeria, and practiced medicine before his current work managing virtual health projects for BC health organizations. His poetry has appeared in Harvard Divinity Bulletin, PRISM International, Pleiades, Columbia Journal, Obsidian, The Maynard, Humber Literary Review, and elsewhere, and has been nominated for the Pushcart Prize. His debut chapbook, Manubrium, was published by Anstruther Press, and was shortlisted for the 2020 bpNichol Chapbook Award, while his debut full-length poetry collection, The Junta of Happenstance, was published by Palimpsest Press in Spring 2021, and went on to win the Governor General's Award for Poetry. He lives in Surrey, BC, in the territories of the Semiahmoo, Katzie, and Kwantlen Nations.

It is generally hard to tease out exactly how a book changes the person who writes it.  My debut chapbook, Manubrium, was one of three sections of what became my debut collection. I wrote it in a time of great personal turmoil, and confronting complex topics (dysfunctional family dynamics, mental illness, [im]migration, and the legacy + present of colonialism) through the poems helped me work them out into a modicum of clarity, and survival. Live to fight another day.  Beyond the writing, which I began before I moved to this country, that chapbook helped me meet Jim Johnstone. I’d previously encountered him only through the poetry in his sublime collection, The Chemical Life.  As I often say, his exploration of suffering in the register of science helped me embrace my own style. I had hoped that he would like Manubrium, and was overjoyed when he agreed to publish it. In the wake of that, I completed The Junta of Happenstance, which Jim edited and helped me refine. I am in Jim’s debt, and remain in awe of his warmth and all he does in, and for, our literary community. Reading from Manubrium also helped me meet a universe of dear poets: Shazia Hafiz Ramji, Aidan Chafe, Dina Del Bucchia, Kevin Spenst, Hasan Namir, that continue to change my life with their kindness.

Nursery rhymes would be the accurate answer, and my immersion in the Yorùbá culture that included ewì, poems that were mostly orally delivered. As I learned to read by myself, an early anthology of delightfully-illustrated poems fascinated me. I do not remember the title, but it included such poems as Wole Soyinka’s “Telephone Conversation” and Christopher Okigbo’s “For He Was A Shrub Among The Poplars.” In my first three years of secondary school, one of my favorite subjects was literature-in-English, in which Mrs. Ukpokolo helped us dissect poems and find their internal life. Studying the anatomy of poetry this way, especially  the poems in West African Verse, an Anthology edited by Donatus Nwoga, gave me a poetic framework I still draw on today.

I tend to feel my way around new projects. I do not start off knowing what a project is about. But because there are “eras” in my thought life, I tend to ruminate on particular topics for months at a time, while my mind grapples with paradoxes or things I do not understand. The poems that I write in these periods tend to be equation proofs that help me know what my questions are, and give me some answers, which raise further questions, and so on. The shape (and using another mathematical analogy, the slope) of the initial poems help me intuit the direction of the project. This tends to take 3 to 5 months. I then pause and try to structure my thoughts, outline as much as I can, and continue with a firmer idea of what my current exploration is.

It begins with the stone in the shoe. The stubborn notion. Or the poignant phrase that drops in my mind. I don’t know how my brain draws associations that become the often-arresting realizations and images many of my poems present themselves with, but I have learned to respect them, and put them in my Notes app. Sometimes, I can develop these phrases into a stanza or an entire poem (if I have thought about it for long enough), but more frequently, I accumulate several fragments that help me sketch out a poem. I then take some time to build it out. I don’t often start off writing a book. I tend to discover after a while that what I am writing is a book. This is easier when older manuscripts are “complete,” and the new poems stay afloat till I can decide what to do with them.

I have a bit of social anxiety, and do not necessarily enjoy any kind of public speaking, but I honor the sacrament of reading poetry together. I find these gatherings very powerful, and especially in the city I live in, they always feel like home. Often, hearing another poet read their work primes my brain toward poetry and attunes my internal ear toward what works, and what a poem can do. I also find myself editing my published poems when I read and prepare for readings, finding better ways for the poem to work. Editing never ends, I fear. In these ways, I would agree that public readings are a part of my creative process.

I am not formally trained in creative writing. My major concerns include figuring out how to create writing that translates my perspectives with fidelity. I don’t have an agenda. In many ways, these poems are for me. Having people who read them has been quite a bonus. If fidelity is the principle that guides my work, my topics tend to have the gravitational centre I have alluded to earlier in this interview. To express that centre in questions: How can I live in the world? Does anyone else see that so many things are like so many other things? What is the nature of sentience? What is even going on? What has humanity failed to learn about the motifs that litter our history? How does one process trauma, or live with a mental illness?

Writers help and prompt us to explore the spectrum of reality: what came before, what is going on, what will happen, what could happen, what if this happened, why is this happening, what does it mean, how might we approach the project of living? I could, of course, just be applying my metaphysical / existential bias to your question.

I find it very essential. Having a skilled editor examine the scope of one’s work, auditing how well one achieved what they set out to do, and helping to clarify what the work does, while pointing out what else the work could do, are gifts I am very grateful for. I have been fortunate to have worked with editors who exemplify this: Jim Johnstone and Daniel Scott Tysdal.

For writing: get it down first; edit later. For life: memento mori.

When I am actively working on a project, I write before my children wake up, after they sleep (if my brain is still functional), or in the snatches I can sometimes steal throughout the day. A typical day involves no writing at all. I am thankful that with poetry, I do not have to maintain a daily word count (as some advise), because the realities of my day job and parenting would have made that incredibly difficult.

When the writing gets stalled, I tend to let it be for some weeks or months. As people smarter than I have pointed out, those intervals are part of writing, too. The brain collects data, runs scenarios, analyses impressions, forms notions, all beneath our consciousness. I have found that reading a lot, in conjunction with the germination that occurs when I allow time for my mind to resettle, often gets me writing again.

I don’t think of home strictly in terms of place. But sometimes I catch a whiff of dust in the dry fall air, and it reminds me of the harmattan season in ìbàdàn, the city I grew up in.

Science would be next on my list, after books. Astronomy, geography, paleontology, geology, physics, chemistry, psychology, anthropology, anatomy, and human physiology feature prominently in my writing. Having spent so many years in scientific training, I am stuck with that way of viewing the world. I don’t hate it. Visual art is a major influence, as well. Directly or not, ekphrasis is a part of my process. Take, for instance, “Body Memories” (https://feudal.substack.com/p/body-memories) a poem I wrote after a memorial head from the Akan peoples, on view at the Met museum.

I’d like to be consistently happy and optimistic. I want to be as good a friend, partner, and parent as I can be. I’d like to be unshackled from “work” and devote myself to art.

For the longest time, I wanted to be a clinical psychologist. If I wasn’t writing, I might deploy my empathy and ability to observe and draw associations, toward helping people navigate their mental health.

Necessity. Always. It feels like removing a bee’s stinger from my flesh (without the inflammation and pain a bee would leave). The relief is like nothing else. Once you’ve tried it once, you’ll likely be back for more.

I have also been outlining the next book I want to write, which I think will be a collection of essays (if I can figure out how to write essays). Meanwhile, I’ve been promoting my debut collection, and working with the publisher of the next.