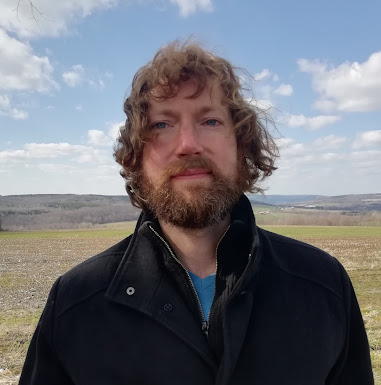 Ryan Dennis is a former Fulbright Scholar in Creative Writing and has taught creative writing at the University of Education, Schwäbisch Gmünd and the National University of Ireland, Galway. In addition to appearing in various literary journals such as The Cimarron Review, New England Review, Fourth Genre, and The Threepenny Review, époque press published his debut novel The Beasts They Turned Away in March 2021. Ryan is a syndicated columnist for agricultural print journals in four countries and two languages. In 2020 he founded The Milk House, an online initiative to showcase the work of those writing on rural subjects in order to help them find greater audiences. More information about Ryan can be found at penofryandennis.com.

Having The Beasts They Turned Away published now meant that I could formally try to elbow my way into the Irish writing community (the country I live in now). It's a card I can flash to guards at the door and they have no choice but to let me in. Other than that, and additionally knowing that my work was out in the world now, it doesn't seem much different. I still feel like there's a chip on my shoulder, and that I have something to prove.

The Beasts They Turned Away is different in that it is set in an Irish context, while my previous work was based in the US. In some ways, it was the same story--the decline of the family farm and its consequences--but putting it into another culture made the project feel entirely fresh and exciting for me.

2 - How did you come to fiction first, as opposed to, say, fiction or non-fiction?

Having taught creative writing, I have witnessed that most young writers are like myself: they come into the classroom to learn about fiction because they find it more exciting, and then later started dabbling in nonfiction. I found it easier to write and publish nonfiction, but have still enjoyed the particular challenges of fiction.

Starting a project is fine for me...it's the thousand-plus hours spent on a book that wears me down. I hate first drafts. No enjoys vomiting, and often for me that's what it is--I force myself to get as many words on the paper as possible so I can go back later and try to find the story within all the shit. On the other hand, I love editing. It feels like putting a puzzle together (which I actually don't enjoy in real life, but sure).

For the three book projects that I've put work into (the first unpublished novel in my twenties, the recently published The Beasts They Turned Away, and the current nonfiction book) I've always known they would be books. For whatever reason, every story I wrote turned out to be just that. For the nonfiction project I'm working on now I do borrow from earlier essays. I guess that's autoplagiarism.

I enjoy a crowd. It's a way to connect with readers directly, as well as sometimes try to convince them that your book is good before they have a chance to make up their minds themselves. That can be important when you're trying to peddle nonconventional fiction like I am.

Nearly all of my writing--and certainly the reasons why I write--relate to one specific concern, and that has to do with the loss of family farming. I've always pursued what it means to be a small farmer in a modern context, regardless of what else is happening around me. For all I know, there can be a pandemic going on, and I probably won't write about it.

It's funny that the day after you publish a book your insight into the world is suddenly much more valuable than it was the day before. I tend to reject the notion of writer as sage. However, that being said, and perhaps both because of the type of people who tend to write, and because of the expectations placed on us, I think writers do tend to live an examined and conscious life. Or at least more than many other types of figures that have platforms.

Does The Writer (with a capital "W") have a specific responsibility towards society? Maybe not. But I would argue each individual, regardless of our occupation, has an obligation to works towards a constructive cultural environment.

I was very lucky that the editing team with époque press were great. They made the story better, which was all you can ask of any editor. They even did the hard work of having to convince me of certain changes, which in the end were good ones. In total, I think the editorial relationship is dependent on both sides having the same vision for the piece, which is imperative.

I heard Salman Rushdie speak once. He said that sometimes you have to teach readers what type of animal you are, and it can take several books to do that. I feel that applies to my publishing career so far, since The Beasts They Turned Away is written in a singular type of style that is not for everyone.

10 - How easy has it been for you to move between genres (poetry to fiction to personal essays)? What do you see as the appeal?

I don't find any problems going between fiction and nonfiction. I haven't written poetry in almost ten years, which is probably a shame. I think, in particular, trying to write poetry has informed my writing in other genres. In particular, I think it has sharpened by attention to language and the rhythm it holds. In the same way, I find that my fiction gets a better reaction from poets.

Sure, try to make me feel guilty.

Like everyone, the non-writing aspects of life are always shifting, so I have to adjust around that. In the best of times I have a routine, and in the worst of times I don't. Ultimately, I try to set myself hourly goals every week. I find that putting a daily or weekly word count on progress can sometimes effect it, whereas if I'm giving myself credit for simply sitting down at the desk, I'm less likely to feel the pressure. On days I don't have to work anywhere else I try to open the notebook right after breakfast, as the morning is usually the best time for me.

Growing up, the repetition of farming acts, from feeding heifers to fieldwork, always helped free up my mind and allowed it to wander in useful ways. Now that I'm off the farm, sometimes I need a good and hard session in the pub just to clear my mind and start fresh again. Note, however, that neither I nor the health board are endorsing this tactic.

The type of people I write about inform my writing the most. These folks are often from rural stock that have seen a struggle or two and have a story that needs to be told. Whatever they have went through is harder than me writing about them, and I try to remind myself of that.

I love Cormac McCarthy. In my opinion, he is the preeminent figure in English-language writing. Sometimes I open up Blood Meridian to a random page just to pump me up. It made me believe in the possibilities of the English language, and showcased just how much intensity can be seething on a page. He won't get a Nobel Prize, but I believe he deserves one.

I was going to say win a major award, but now I think the better answer is to effect positive change in the world.

The answer to both would be to farm. In the end, the reasons I didn't were partly due to its poor economics, and partly due to what I might be losing out on if I did. I still have fancy notions of finding a way to break even with a small herd or a couple hundred acres, but that's easier said than done these days. Still, most of my identity is tied up into farming, and for now the only way I can deal with that is to write about it.

The first story I wrote, at the age of 14, was about the area myth of the Hairy Women of Klipnocky. It was published in the Canaseraga Creek Criar, the monthly flyer for the residents of the 500-person town. It wasn't good, because it was written by a 14-year-old, but the locals really enjoyed it because it was essentially a narrative about them. The experience taught me the value of telling someone's story and giving voice to their experience. Growing up on a farm, I saw that the story of people like my family and neighbors weren't being told, so I sought to fill that gap.

Book: Stoner, by Jonathan Williams. It moved me to tears, which seldom happens. The last great film was Happy as Lazzaro, an Italian movie from 2018. Whatever it is, sometimes the Italians come out with something extremely special on the screen.

I'm working on a memoir-based nonfiction book that seeks to explicitly pinpoint the the political moments that ruined the family farm in the United States, as well as show the consequences of those decisions by telling the particular story of our family. I was fortunate enough to recently receive a Writer-in-Residence post at the National University of Ireland, Maynooth to help me carry out this project.

Posted by rob mclennan at 8:31 AM
Labels: 12 or 20 questions, époque press, Ryan Dennis