Lewis Freedman, I Want Something Other Than Time

I Want Something Other Than Time

I want to feel ok
right here. I want to
say I’m not wasted
in the choppy paint of
thinks itself, & a dreamy
obedience to the music proceeds me.
As I’ve said before, a dream might not be
built of representation.
So cheap a ransom where the accident
is almost repeated, is an interior plane of
expiring breath, hello & then let go.
I think the devil’s in
going back to a withheld meaning &
letting its deferred presence
prescribe a place we’ll never get to.
We’re assuming then that
this is one of them, uh,
special clovers, abandoned,
like all things here, to the hype
of liberation.
O mortar get me higher,
the loud voice goes,
move away
from the shore. 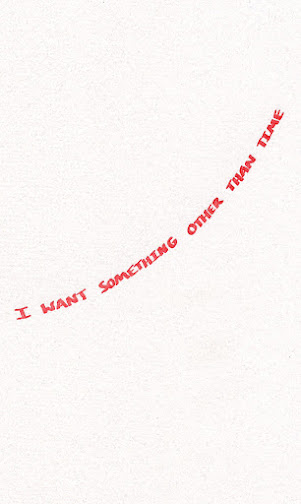 I’m fascinated by the echoes that ripple across the sixty-four poems that make up Lewis Freedman’s second full-length collection, I Want Something Other Than Time (Brooklyn NY: Ugly Duckling Presse, 2021), a book that follows a debut I clearly missed seeing, Residual Synonyms for the Name of God (Ugly Duckling Presse, 2016). Each poem in I Want Something Other Than Time is self-contained (each poem set on a different, single page), but also all share the same title, something that this collection shares with Denver poet Noah Eli Gordon’s Is That the Sound of a Piano Coming from Several Houses Down? (New York NY: Solid Objects, 2018) [see my review of such here] and The Source (New York NY: Futurepoem Books, 2011) [see my review of such here]. There is something I’ve always found curious about the repeated-title, allowing poems to echo each other and accumulate, even as they simultaneously exist as singular pieces. After a while, the differences and the echoes shift, and become more prominent (reminiscent, slightly, of the character Auggie’s daily photographs in the Paul Auster-writ 1995 feature length film, Smoke). Freedman’s poems speak through physical and cognitive boundaries, working to stretch beyond into further connection, all while articulating from a kind of insularity. “I get up feeling / numb,” he writes, to open one of the poems further in the collection, “but not really / numb, more like I get up / feeling contempt for a / numbness.” Or, a page prior: “From the body cave / to the body boundaries, / we are immersed in the / circumstance of holding our / selves in place.” The meditative lyric that Freedman writes is deeply evocative, writing a kind of dislocation through the self that is intriguing to work through. Or, as the first poem in Freedman’s collection begins: “The aim of this writing / is to show that / I does not disappear. / Even when I disappear I / does not disappear.”
Posted by rob mclennan at 8:31 AM
Labels: Lewis Freedman, ugly duckling presse