Maybe it wasn’t a narrative at all. Maybe it was a sequence or a constellation. I think the storyline came after the fact. The lines were drawn through the facts after the facts happened. At the beginning of what is now England, in that dark part of history, humans learned certain abilities, for example, literacy, for example the ability to make pottery on the wheel, and lost them when violence between tribes overtook the skeleton of the Roman system. They used cups and bowls made on home soil for hundreds of years, not knowing how they had been made. 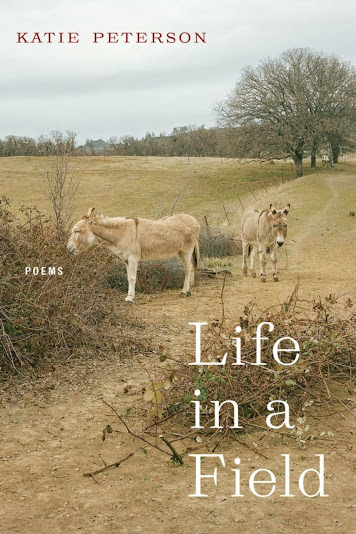 I’m charmed by the prose sweep of Davis, California poet Katie Peterson’s fifth poetry collection, Life in a Field: Poems (Berkeley CA: Omnidawn, 2021), winner of the “Omnidawn Open,” as judged by New York poet and essayist Rachel Zucker. Peterson is the author of This One Tree (New Issues, 2006), which was awarded the New Issues Poetry Prize by judge William Olson, Permission (New Issues, 2013), The Accounts (University of Chicago Press, 2013), which won the Rilke Prize, and A Piece of Good News (Farrar, Straus & Giroux, 2019). As her author website writes, Life in a Field is built “as a collaboration with the photographer Young Suh,” a photographer who also happens to be Peterson’s husband. As Rachel Zucker begins her piece to open the collection: “I found the book you are about to read delightfully easy to enjoy, and yet I find it difficult to explain what I love about it, and why I knew, with conviction, that from among a group of extremely strong entries, I would pick this manuscript for publication. Like most great poetry, Life in a Field is impossible to summarize or paraphrase. More than most poetry, it eludes formal categorization. Life in a Field is hybrid, mongrel—part allegory, part parable, part fable, part fairytale, part futurist pastoral set in the past or an alternate reality. In this short collection, Peterson has created her own original, heterodox form.” Peterson’s texts exist as the best kind of collaboration, in that the connections between text and image aren’t obvious or even replicated between them. These aren’t pieces depicting in photography or written word, for example, what is offered in the other form; it is as though the text and image exist in a curious kind of conversation with each other, each in turn reflecting upon and building beyond the other. As Peterson offers, herself, towards the end of the collection: “I have always thought that the opposite of chance was focus.”

In this story there is a girl and there is a donkey. The girl approaches the donkey because the girl has something to say. What is it?

Through blocks and stretches of contained prose, she writes the narrative of the donkey, and the narrative of the girl: two threads that run throughout, occasionally meeting, mingling and spiralling out again, in among the other elements. One could offer how Life in a Field is a story of how perception works to telling a story, or how narration shapes perception, whether the truth of the donkey or the truth of the girl, or the truth of the girl within her church, and the boundaries such offers, contains and constricts. “Because we are so far past this story,” she writes, “I wish to linger on it. This story is not your story. You are not meant to relate to it. You are meant to pitch a tent inside this page like a down and out person might do by the American River, under the trestle tracks, where the outgrowth and heat and greenery and shade in proximity to water makes a drought as unlikely as a marriage of equals in a century where women can’t read. You are meant to believe you can live there.” Between text and image, this is a book of mood, tone and shifts, writing far more than the writing might first offer, and threads of narrative that float, rather than hold, hang or pull.

Peterson writes of a donkey, and of a girl. One could almost suggest the collection as a whole—prose poems, poems and image—is constructed not as a narrative-per-se but as a collage across a large canvas, one that speaks around privilege, love, labour, time, decay and empathy. The book, Life in a Field, is simply the final, completed single image; one simply has to stand back far enough to get a good look, and take it all in.

The donkey never knew the difference between a game and labor, but he knew he could get bored. And he did, pulling a rope between his teeth in a kind of race. But it wasn’t a race, there wasn’t another donkey! And the part of the field they had him in, closed off on all sides by fences, didn’t make sense for racing—in a race it seemed you should be able to go as fast as you like, as far as you had to. In this game, the object was to cover the same track again and again with the plow, and at the end of the row, sometimes as a kindness, never really as payment, because they were good to him, they gave him a drink of water before they turned him around.