I Held Your Hand

under a crippled Moses-tree. we
walked for hours past ice-mud rivers. hot 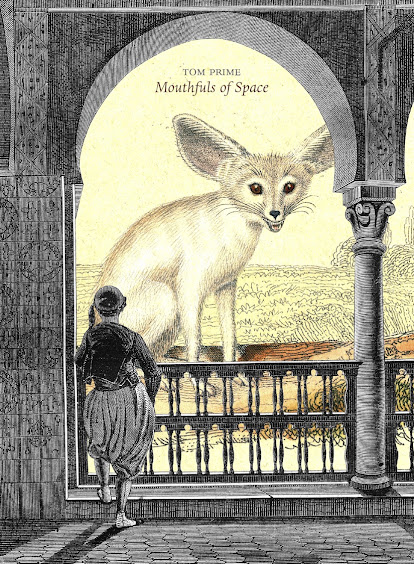 After a variety of solo and collaborative chapbooks, including his full-length collaborative volume with Gary Barwin, A CEMETERY FOR HOLES, poems by Tom Prime and Gary Barwin (Gordon Hill Press, 2019) [see my review of such here] (with a second volume forthcoming, it would appear), London, Ontario poet, performer and musician Tom Prime’s full-length solo poetry debut is Mouthfuls of Space (Vancouver BC: A Feed Dog Book/Anvil Books, 2021). Mouthfuls of Space is a collection of narrative lyrics that bleed into surrealism, writing of existing on the very edge, from which, had he fallen over completely, there would be no return. As a kind of recovery journal through the lyric, Prime writes through childhood abuse, poverty and trauma. “I am awarded the chance to die / smiling,” he writes, to close the short poem, “Capitalist Mysticism,” “clapping my hands [.]” Prime writes a fog of perception, of homelessness and eventual factory work, and an ongoing process of working through trauma as a way to return to feeling fully human. “I died a few years ago / since then,” he writes, to begin the opening poem, “Working Class,” “I’ve been / smoking cheaper cigarettes // I like to imagine I’m still alive / I can smoke, get drunk / do things living people do // the other ghosts think I’m strange / they busy themselves bothering people [.]” Or, as the last stanza of the poem “Golden Apples,” that reads: “if I loved you, it was / then, your pea-green coat and / fucked-up hair—staring out of nowhere / your cold October hands [.]”

Through the worst of what he describes, there remains an ongoing acknowledgment of beauty, however hallucinatory or surreal, and one that eventually becomes a tether, allowing him the wherewithal to eventually lift above and beyond the worst of these experiences. “we trudge across fields of hornet tails,” he writes, as part of the sequence “Glass Angels,” “planted by hyper-intelligent computer processors— / the moon, a Las Vegas in the sky // glow-worm light synthesized with the reflective / sub-surface of cats’ eyes [.]” Despite the layers and levels of trauma, there is a fearlessness to these poems, and some stunning lines and images, writing his way back into being. “life is a ship that fell / off the earth and now // floats silently in space,” he writes, to close the poem “Addictionary.” Or, towards the end, the poem “Immurement,” that begins: “I’m a large Tupperware container filled with bones [.]” The narrator of these poems has been through hell, but he does not describe hell; one could almost see these poems as a sequence of movements, one foot perpetually placed ahead of another. These are poems that manage that most difficult of possibilities: the ability to continue forward.