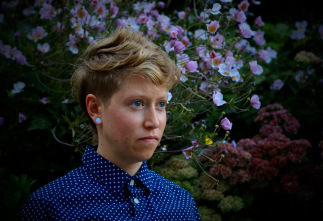 Lisa Summe is the author of Say It Hurts (YesYes Books, 2021). She earned a BA and MA in literature at the University of Cincinnati, and an MFA in poetry from Virginia Tech. Her poems have appeared or are forthcoming in Bat City Review, Cincinnati Review, Muzzle, Salt Hill, Verse Daily, West Branch, and elsewhere. You can find her running, playing baseball, or eating vegan pastries in Pittsburgh, PA, on Twitter and Instragram @lisasumme, and at lisasumme.com.

I wish this weren’t the case, but I definitely feel validated as a writer in a way that I didn’t pre-book. It’s also so nice when strangers reach out and tell you something positive they experienced when reading or hearing your poems. My book just came out this year, in January, but it’s been finished for a couple years now, and I’ve been working on other things. I finished a second manuscript in the fall, another collection of poems. I’d say it’s really different in that it’s just better. The poems feel a little more controlled and intentional. They’re just better because I’ve had more practice. In the second collection I’ve also delved into some topics I haven’t previously explored involving domestic violence, particularly in the home my mother grew up in, and the intergenerational trauma and grief that comes with that.

I wanted to be a fiction writer once I switched to being an English major in college! But those workshops always filled up, every single term until I was a senior, so I settled for poetry, hoping to get a teacher who would talk to me about how to write a novel. Little did I know I’d never stop writing poems after that first class. Writing poems is what has actually changed my life.

I never think of writing as toward a project outside of assuming that once I have a big pile of poems I’ll make them into a book. The idea of starting anything new is pretty paralyzing for me, so I try to trick myself by doing very small steps like can you write a poem, any poem, this week. I was in a good rhythm for a couple years recently where I wrote a poem a week. A lot of those poems made up the second collection. My revisions don’t usually radically change a poem. If the poem sucks I just throw it away.

Poems happen different for me all the time, but usually it’s from making myself sit down and carve out the time for it. Sometimes I’m so stuck I just kind of journal until I say something complicated or interesting, then I try to latch onto that and make a poem. Better than that is coming up with a really interesting image or sentence while on a run or something, but that’s pretty rare for me. I always have to keep the mindset of just one poem at a time because I can only handle small tasks and goals, and so I’ve learned how to make big things small. The fun part of making a book, actually, isn’t writing toward a thing, but taking all the pieces and seeing how they talk to each other / what kind of story they tell.

I find giving readings to be pretty energizing but they don’t do anything for me in terms of my creative process really. It’s just nice to be in a room with other writers and seeing them do their thing. It’s nice to have someone tell you good job.

I never feel like I’m working to answer any questions on a large scale, though I, of course, hope my poems inform peoples’ feelings about major things, like love and grief and how one cannot or will not exist without the other. It feels a little too expected or easy or something for me to say that my concerns are feelings, mostly my own. Which are broad and both theoretical and not theoretical at all. Right now, I’m kind of obsessed with time and how it passes and how it can be measured very precisely and yet, depending on where a person is, physically in time and space, and where a person is emotionally, how we perceive time to be passing, the rate of it, is affected by those things. I don’t really know what to say about what the current questions are, but I hope, for all of us, writers or not, we’re thinking about how to live in a way that treats others (people, animals, the planet) kindly, and navigating that in a genuine way—there’s questions we all need to ask ourselves in order to do that.

I think it’s similar to what I think, for me, is the role of literature, which is to provide emotionally honest perspectives on things so that readers become more imaginative and, therefore, more empathetic.

Essential, probably. Difficult, maybe. I only have one experience with YesYes for my one book, and it was really positive. The most difficult thing, I think, doesn’t have to do with the writing or editing at all, but maybe with people just having different organizational skills and approaches to completing tasks. I guess that’s true of any work environment.

Be nice to yourself.

I don’t have a writing routine right now. What’s worked best for me is trying to write a poem a week. But I take months-years of breaks from doing that. I may be getting back into the swing of it now, but still feel kind of fried from a long stretch of writing from the last few years. Started taking an intentional break in December am not writing much these days. All my best days begin with avocado toast on seedy whole wheat sourdough and a run after a night in which I went to bed early.

I turn to books. The more poems I read, the more poems I write, usually. Alex Dimitrov, Matt McBride, and Wendy Xu are poets who come to mind, whose books I take off the shelf when I’m really struggling.

Anything that has just been cooked and is cooling by an open window.

Running is a big part of mental / emotional health maintenance for me that I think has helped me keep a somewhat clear head in which I’m able to kind of “organize” my feelings in a way that make sense for a poem, and helped me, too, I think with staying disciplined with writing when I choose to prioritize it, maybe from the high or the release that happens, maybe that helps me feel “motivated.” Reading books of poems and listening to music that make me feel excited about creating are important. All time fav poets are Alex Dimitrov, Olivia Gatwood, Hieu Minh Nguyen, Emily Skaja, Richard Siken, Danez Smith. But so many more, too.

Get good at skateboarding. Learn to play the drums. Maybe write prose, but really I waver on that.

This is such an interesting question. I always think of occupation as job as how you make money. I don’t make enough money from poems to live. If I did, that would be the dream for sure, I think, though there’s always the feeling of when something becomes your job maybe you don’t really like it anymore.

I started college as a dietetics major and have, in the last year or so, been toying around with the idea of going to nursing school, though right now, today, I don’t really think that’s something I’ll follow through with. I currently work an office job and I really don’t want to hang out a desk for the rest of my life, though working from home most of the time has changed my attitude quite a bit. I’m really into moving my body and a stationary job isn’t very good for me. Maybe I’d have gone to trade school for some kind of more physical job, which would suit me better, but I just went to college like everyone else around me did, like I was expected to. I would’ve never started writing had I not gone to college and then switched majors, but I also think college is kind of a scam, at least in the current model that puts many people in debt for the rest of their lives. I will also say I went to school for 9 years and have 3 degrees. So I mean I love school. I just think it’s fucked up everyone who wants to go doesn’t have the same opportunity to do that.

How much I loved my freshman comp class in college.

I’ve been reading a ton of poetry this year and have come across some real bangers. Two that stand out are Wound from the Mouth of a Wound by torrin a. greathouse (Milkweed Editions, 2020), and Pine by Julia Koets (Southern Indiana Review, 2021). I don’t see many movies. Promising Young Woman was pretty uncomfortable in a way I enjoyed. I liked that movie.

Giving 100% at baseball practice. Navigating nonmonogamy. Right now it’s April, and me and my girlfriend are trying to write a poem a week this month. I’m doing it but it’s taking everything in me.