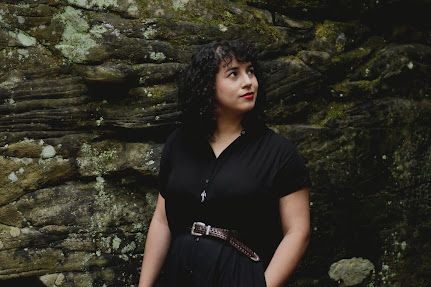 Rebecca Salazar (she/they) is a writer, editor, and community organizer living on the unceded territory of the Wolastoqiyik. Published works include sulphurtongue (McClelland & Stewart), the knife you need to justify the wound (Rahila’s Ghost) and Guzzle (Anstruther). Salazar edits poetry for The Fiddlehead and Plenitude magazines, and co-hosts the Elm & Ampersand podcast.

sulphurtongue feels like a private archive of everything I learned, unlearned, and grew through over a period of 12+ years. I have re-written it drastically multiple times, and it has changed so much from what I originally imagined to be—I think I needed to let it change me before I could write what it became, now.

I tried writing fiction first, but quickly realized I don’t currently have the skills to create and maintain plot. Poetry feels more fluid, less temporally bound, and more permissive of polyvocality. I do occasionally write non-fiction, but it feels less like switching modes and more like writing longer prose poems.

Most of the poems in sulphurtongue began as phone notes, fragments scribbled on scraps of paper, bits of conversation I overheard, and oral stories passed through my family that I tried and failed to research empirically, only to learn that the fragmentation was necessary to the truth they already contained. A few individual poems leapt into being fully formed, but those are very few—most of my poems have undergone multiple rounds of transformations.

Interruptions guide me: I start with fragments, try to puzzle out their general drive, become invested in that idea, and then inevitably end up changing course when something more urgent takes over what I thought was the initial project.

I do enjoy sharing readings with other writers, especially with fellow queer and BIPOC writers. Getting to hear people read their work in their own voice—beyond what is available on the page—has helped me learn how embodied my own writing is. Readings can be anxious and fraught spaces, but the simple act of letting your voice resonate with others in your community matters more than most public readings seem to acknowledge.

I’ll paraphrase two questions from years of study in feminist theory, queer theory, critical race theory, disability theory, and ecocriticism: 1. how to want to stay with a dying planet or body, and offer it care? 2. how to make a future in which my kin can do more than just survive?

To reduce it to one role would be to erase the skills and abilities of multiple kinds of writers, I think. There are writers who are educators and/or critics and/or activists and/or mentors to newer writers and/or leaders and/or healers and/or archivists and/or space-makers for those who have been erased and excluded. Not every writer can be everything, which is the beauty of finding which roles you yourself can perform.

Essential, but fraught. I have had the privilege of working with a few excellent editors—Dionne Brand, Triny Finlay, Mallory Tater, Katie Fewster-Yan, Ross Leckie. What is difficult is that I only found these editors after encountering a lot of abuse and tokenization in CanLit. If ever an editor or mentor undermines your autonomy, minimizes your identity, tokenizes your, or tries to fuck you, end that relationship. No writer should have to weigh the risk of being abused or taken advantage of, but that is the current difficulty of editing relationships in this community. I recommend Leah Horlick’s “Careful Inventory” columns on Open Book, which are a caring and honest look at the boundaries that poets need to stay safe—they are what I always needed to hear as a young writer.

This credit goes to a lifelong artist friend, Melanie Durette, who told me when we were about seventeen to never stop writing. I don’t think she realized how much it would mean to me for decades later.

10 - How easy has it been for you to move between genres (poetry to non-fiction)? What do you see as the appeal?

The kinds of non-fiction I am most drawn to feel like writing poetry—I mentioned already that non-fiction can feel like writing a longer prose poem. My process for both is similarly episodic, gathering fragments and voices and assembling them into something via associative logic rather than linear chronology. I think both are modes of connecting to what feels most urgent—not to say that fiction cannot do this, just that I personally haven’t succeeded in doing this with fiction.

Routine feels both necessary and unattainable in my writing and regular life, due to a combination of assorted freelance gigs, academic work, and chronic illnesses.  I do have rituals that I use to put myself in writing mode—oolong tea, beeswax candles, tarot pulls, specific kinds of music—but keeping any kind of regular schedule is fickle.

I find myself re-writing old poems when I’m stuck, either splitting them into many new pieces or joining old fragments to try something new. I have found the pandemic an especially draining time, and have written very little in the last year. I try to understand this dry spell as a gathering period for whatever writing will come next.

Of the literal place: a pine forest on a summer night, with a hint of sulphur from the nearby mines. Of the concept: fresh-cooked rice and fried plantains.

Definitely—any art form that embodies the tone or sensations I want to write. It’s a synaesthetic process for me, in that every sound or texture has a colour for me, and that weighs into the way I channel things into writing. Music-wise, sulphurtongue was deeply influenced to Julia Kent, Lido Pimienta, Timber Timbre, FKA Twigs, Agnes Obel, Cold Specks, Valgeir Sigurdsson, Pallmer, and the Colombian folk songs and cumbias my family raised me in.

I keep a shelf of books, mostly poetry, that have changed or guided me most. To share just ten: Dionne Brand’s No language is neutral, Liz Howard’s Infinite citizen of the shaking tent, Joelle Barron’s Ritual lights, Billy-Ray Belcourt’s This wound is a world, Lauren Turner’s The only card in a deck of knives, Tommy Pico’s Nature Poem, Kim Hyesoon’s Sorrowtoothpaste mirrorcream (translated by Don Mee Choi), an essay collection titled Arts of Living on a Damaged Planet, Gabriel Garcia Marquez’ Cien años de soledad, and literally every book written to date by Carmen Maria Machado.

To abolish the white supremacist-colonial-capitalist hetero-patriarchy, and to live somewhere that I can start a garden.

I haven’t had the privilege of making a living wage from writing, so I have cobbled together a number of occupations to support myself since I started writing—bookstore inventory worker, part-time university instructor, apartment re-painter, editor, researcher for an academic theatre project, and more odd jobs than I can count. If I had the time and financial security, I would love to spend more time making visual art.

I have joked before that I started writing as a way to compensate for starting school without speaking English, and I’m not sure it was entirely a joke. More seriously, I think writing is how I find ways to do everything else—it remains how I stay involved in academia, activism, therapy, spirituality, arts communities, everything.

Book: The Undying by Anne Boyer. Film: But I’m A Cheerleader, watched over video-call with two long-distance queer friends; somehow, none of us had seen it until now.

My dissertation, which includes a manuscript of poetry and a several essays-in-progress on ecological crisis, sexual trauma, and the struggle to imagine a kind future to survive in—that imagining is part of the work, too.