David Bradford, Dream of No One but Myself 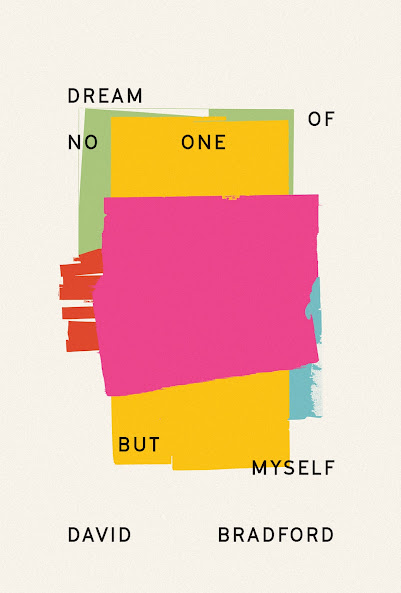 I’d been looking forward to seeing Montreal poet, editor and publisher David Bradford’s full-length debut, Dream of No One but Myself (Kingston ON: Brick Books, 2021), a collection that seeks conversation, even uncomfortably so, around the life and eventual loss of a father, a man who long disappeared from the daily lives of his wife and young son but for brief, difficult periods. Utilizing elements of erasure, lyric and narrative, Bradford writes of the semi-presence and distances of a father, and the erasures that ensued through that of both himself and his mother. “Too late to help. Or stop // letting what I lost. / Be what I lost.” he writes, as part of the extended lyric and erasure collage-sequence, “The Plot.” Through shifts and turns, Bradford writes of his upbringing and his parents, both individually and together, acknowledging the mutability of the text and the present; of half-siblings, memory and the past. This is less a collection of poems, erasures and photographs than a scrapbook, with all the scraps, missing stories, snapshots and incomplete or even conflicting narratives, attempting to make sense of what exactly it portrays, and what exactly it means. As Bradford’s collection suggests, through altered photographs from the family archive, not even a still photograph is free from alteration, as memory shifts or context expands. This collection exists as a curious structural counterpoint to another recent Brick Books debut around parental loss and story-reclamation through the form of the poetic scrapbook, Andrea Actis’ Grey All Over (Brick Books, 2021) [see my review of such here]. “My point to her,” Bradford writes, as part of “The Mess,” “those years, was: if you keep having to clean it up then / you ain’t cleaning shit; aren’t you tired yet?” The poems of Dream of No One but Myself work not to write out the past but, through erasure and recombinative structures, attempt instead to find a new kind of clarity and comprehension.

Care enough about either of us. She will indulge herself a little. Telling it again this way: she grew till 17 and a half. A madness, she insists, she kept up at her mother’s behest. How my grandmother, a woman all of 4’8”—her size-five shoes handed down to me till I was ten—desperately, desperately wanted her hunching daughter to make it to at least five feet. How budvig and two cups of powdered milk every day would ensure it. As tall a daughter as she could get. How my grandmother, who cut my mother’s hair a twee bowl till she was 12 to thicken it past the thickness of her own childishly genteel locks—hair I never quite failed to call cheveux d’ange, like the pasta, picking at her bi-yearly perm while she cackled—would have done everything in her power to will my wee mother’s bones up. How she prayed. And my mother answered. By standing exactly five feet. Much taller than she should have been. And stopped drinking milk for a decade.

My mother’s hair, forever since, is so thick. She hunches to this day.

There is a silence in this collection, one articulated through writing all that surrounds it, revealing the shape and the scope of it; a silence and an anxiety. And yet, there are places where the silence and the darkness bleed through, writing the many complications of a father through a staggered, fractured narrative; one with only the narrator himself as connecting through-line, otherwise appearing and disappearing. Bradford writes of how we are shaped and formed and diminished and even, at times, erased, writing the difficulties the narrator and his mother endured. “How neither of us / wish to rewrite or relive / or can / quite yet,” he writes, as part of “Even Ways of Looking at Nothing,” “You / polishing haikus / about polishing // Me / unearthing Stevens / desperate / for the both of us [.]”