WHEN I BEGAN TO TRANSLATE Yu Xiuhua, I had, to my embarrassment, only read one of her poems, “Crossing Half of China to Fuck You.” Widely known as Yu’s most “notorious” poem, it was posted online in October 2014 and went viral. With its catchy title and raw language, the piece speaks explicitly about sex and the poet’s craving for it:

Given the patriarchal and Confucianist influences that dominate contemporary Chinese society, it is rare for a “foreigner” like me to come across a Chinese woman poet not yet forty writing about sex so openly—and “desperately”—let alone a farmer with cerebral palsy who is completely self-taught. Yu Xiuhua’s life and work has been mediatized nationwide, however. Reception in the male-dominated world of Chinese poetry has been mixed: some interpret the poet’s longing for love as plain “lust,” some feel offended by Yu’s “unrefined” language (she is a high school dropout) and are embarrassed by what they read, some show compassion for her difficult life and admire her courage, and others affirm the therapeutic and spiritual force of poetry, whereas others yet express their enthusiasm for this new confessional voice in the Chinese literary mainstream. (Fiona Sze-Lorrain, “Translator’s Note”) 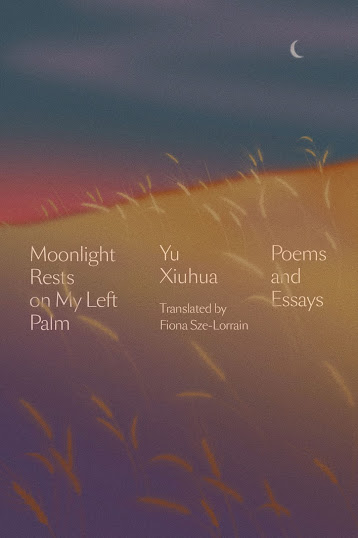 I find myself captivated by Moonlight Rests on My Left Palm: Poems and Essays (New York NY: Astra House Publishing, 2021) by Chinese poet Yu Xiuhua, translated by Fiona Sze-Lorrain. Born with cerebral palsy in 1976 in Hengdian village, Hubei Province, China, Yu Xiuhua was, as the book copy offers, “Unable to attend college, travel, or work the land with her parents, she remained home. In defiance of the stigma attached to her disability, her status as a divorced single mother, and as a peasant in rural China, Yu found her voice in poetry.” The collection opens with the now-infamous poem “Crossing Half of China to Fuck You,” a poem that became an “online sensation” in 2014, and thus launched Yu’s career as a published writer. “Fucking you and being fucked by you are quite the same,” the poem begins, “no more / than the force of two colliding bodies, a flower coaxed into blossom [.]” I’m fascinated, as well, by how this book is structured, offering, after the opening poem, essays by the author as section-openers, which allow the possibility for more of the author’s own thinking around history, language, morality, suffering, disability, politics and poetry, and of exploring the possibilities therein. I don’t know if this was structured by the poet herself or her editor, but it allows for a collection built as a singular unit, incorporating the essays in conversation with the poems; as an essential part of the text, instead of the usual offering of including them at the end, almost as afterthought.

Set as eight essays, six of which open sections of poems composed as abstracts through direct statement, as the author writes her own way into being. “Yes, it can’t stand on its own,” she writes, to open the poem “Dust,” “so it leans west in the wind [.]” There is a meditative and even wistful clarity through these poems, as well as a self-deprecating humour, through a poet who writes of the erotic, of love and the land, and of her immediate and imagined landscapes. She writes with a clarity and a humility, offering her meditations in line with the nature poets, attentive to the movements and shifts of the world around her. There is something quite compelling in the way Yu writes, through Fiona Sze-Lorrain’s attentive translation, against such forces that would erase her voice, whether through her disability, her poverty, her gender or as a divorced, single mother. Through these poems and essays, she claims her own space in the world with an openness that refuses to be contained, while remaining a humble and quietly attentive observer, even of her own life, thoughts and experiences. As she writes to close the essay “I Live to Reject Lofty Words”: “I am desperately in love with this inexplicable and obscure life. I love its conceit, and the haze that surfaces at low points in my life. I am grateful for being well and alive, and all because of my lowly existence.”

Rain Falls outside the Window

But I kept saying on the spot where I dried, drank a bottle of wine
flipped and pushed it over, put it upright
then pushed it over
Rain outside the window neglected me: a drop hugged another, fell
and pushed each other, falling
Fusion is wreckage, wreckage fusion
But how long can one return to the sky, how long does it take to reach
a descent
a—when I flick a speck of cigarette ash, another has arisen
I love someone to death
Another is in my belly
Rain sounds different in different places
No one vanishes faster than another
No one arrives more compact than another
No one in the rain, or not in it