where are the minnows
song of gongs in mini-mall 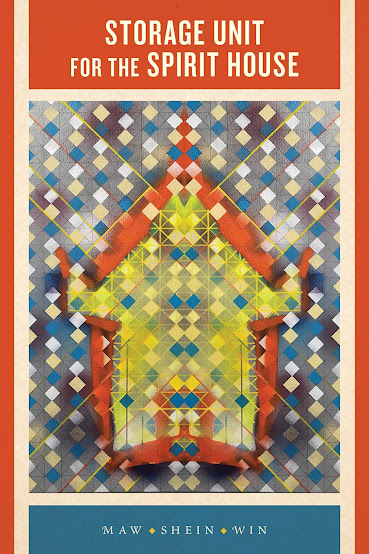 California poet Maw Shein Win’s second full-length collection, following the chapbook Score and Bone (Nomadic Press, 2016) and the full-length debut Invisible Gifts: Poems (Manic D Press, 2018), is Storage Unit for the Spirit House (Oakland CA: Omnidawn, 2020), a collection composed in short sketches, writing the small moments and perspectives that form together to articulate a particular stretch of both the external and internal workings of a life being fully lived. In a dense and sketched-out lyric, hers is a poetic of accumulated dailyness, a lyric journal of dreams and domestic composed via shorter units of precision around ordinary extraordinariness. She writes portraits of medical appointments, local landmarks, storage units and strange dreams, a litany of family and subconscious images, children who won’t sleep and a house on the lake. “she runs on four legs along a dry / river bed,” she writes, to close the poem “Bottle,” “mother sleeping // the sun blinking / the scar questions // why why the chickens / why why jam & eggs // why why the hand /caught in a bottle of laughter [.]” There are points at which her portraits lean into the dream-like and surreal, offering different levels of concrete detail, all while offering an otherworldly portrait, it would seem, of what might otherwise be considered uniquely and innately familiar. “tinctures for pain,” she writes, to open the poem “Hospital,” “capsized vessels / hand reaches into warm body / she believes in magic & so do I / painted things [.]”

There is something curious about how certain of her poems are structured: stanzas single and even double-spaced within, but larger spaces between, akin to different sections/stanzas existing as a self-contained call-and-response, offering both perspective and reflection. Her play of space on the page allows for different levels of pause, break and connection, offering not, I suppose, hesitation, but levels of connection and commentary, such as the poem “Imaging Center,” that reads, in full:

the pointer stick she grips
trails my twisting spine

she plots movement
with the exactness of a fingertip

The poem-portraits captured as part of her Storage Unit for the Spirit House each offer perspectives of moments large and small—everything that goes through the mind as her narrator moves through the world and her day—each poem oriented to the detail of their individual frame; the gaze of her poems expand and contract, offering both the larger view and one so close it can only exist within. As the first half of the poem “Phone Booth” offers: “a Brownie camera slung around a sweaty neck // telephone wires crisscross // you didn’t hear that did you? you did not didn’t you? // child in a burlap cape leaps through the garden [.]” The poems are not set as a scrapbook, but as a photo album of memories, moments and ideas. “how does a painting speak?” she asks, as part of the poem “Diorama,” “language is the difference / among three things // who enters the spectacle? the brave ones with their silk skirts [.]”