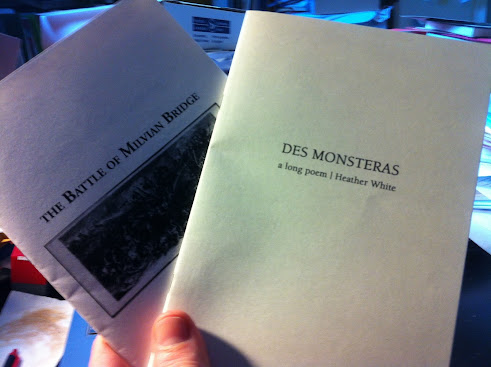 More chapbooks! Hooray for this, yes? It is good that I’m finally seeing further appear in my mailbox (although now I have a mound of them I’ve yet to get to). Stay tuned!

Montreal QC: I’m struck by this seeming-chapbook debut by Montreal writer Heather White, her chapbook DES MONSTERAS (Vallum Chapbooks, 2021). Subtitled “a long poem,” the eighteen poems within display a playfully-structured collage, folding in quotes by and elements of and around Mary Oliver, Taylor Swift and Paul Celan, among other references. “I roam the cold city with Taylor Swift,” she writes, mid-way through the collection, “singing voiceover. Her songs tell / their stories to the people in them.” The structure of the poems, as the back cover echoes, suggests poems quickly sketched via cellphone as journal notes, hastily written between thoughts as “both an insular retreat and an impulse to connect during the Montreal winter of the pandemic.” I’m curious about a number of things regarding White’s work: how far might this poem go, for example, beyond the boundaries of this debut publication?

I slept and woke up remembering
that demonstrate comes from the
same root as monster. Both are
about pointing out or warning,
showing, montrer. A monster is a
messenger, often mistaken for the
message. A harbinger, coming
round the mountain, montagne:
nature’s pedestal. Mont Royal,
Montréal. What did I want this man
to put on a mountain for me?
Already his gaze released my face
from me for blissful long shifts. And
God knows how aching, how weary,
I’d become as the sole watchman of
my self, the last guardian of my
features, the one clerk left still
minding the store of my whole
buzzing, godforsaken body.

Toronto ON: It is good to see that Toronto poet, editor and critic Michael Boughn is still producing chapbooks, the latest of which is The Battle of Milvian Bridge (shuffaloff, 2021), a playful and gymnastic eleven-part open-ended sequence around the Green Knight, a character from Arthurian lore that has lately fallen back into cultural awareness, thanks to the recent feature film, as well as Helen Hajnoczky’s recent Frost & Pollen (Picton ON: Invisible Publishing, 2021) [see my review of such here]. “Where’s the Green Knight,” the poem begins, “when you need him & his axe / to smarten up the Zeitgeist, when / the zeit’s geist is all / wham bam thank you ma’m, grab ‘em / by the— / well, Morgan Le Fay / might have a thing or two to say / about that […]” Boughn utilizes the legend of the Green Knight as a framework through which to mark and remark upon current affairs and cultural currency, language incursions, religious fervors and twisted meanings. As the sixth section ends: “nothing adds a depth / of understanding otherwise / circumscribed by judgement’s / geometry which brings the poem / back around to the Circular Slab / at the centre of our story / and the Green Knight / bearing news of the Hot Tamale [.]”

3. In Which The Mystery Ship Reappears

& signage boldly splayed
to let the poet know he made

a slip, & the elusive ship
is without a doubt Solomon’s

lances, fancy cups, the whole
round table schtick the Green

Knight brought to a quick
pause, the Cup recalling Morgan’s