Noah Eli Gordon, Is That the Sound of a Piano Coming from Several Houses Down?

Someone tied to a parking meter the dog that barks every time a woman approaches to insert a quarter. This makes her the subject. It is a metaphor for the aristocracy of money. One performer plays both leash and dog. Another stands in for the meter. I play the woman. Someone appears offstage. It is often difficult to tell a king from a queen. The problem is no one plays the difficulty.

Boulder, Colorado poet Noah Eli Gordon’s latest poetry title is Is That the Sound of a Piano Coming from Several Houses Down? (New York NY: Solid Objects, 2018), a collection I’ve been looking forward to seeing ever since I first saw selections from it in Ugly Ducking Presse’s 6x6 back in 2012 [see my review of such here]. Similar in structure to his collection The Source (New York NY: Futurepoem Books, 2011) [see my review of such here], the poems in this new work all share the same title, “The Problem,” with the bulk of the collection made up of prose poems, with none longer than a single page. Unlike The Source, made up of poems titled “The Source,” his collection of poems each titled “The Problem” isn’t titled The Problem, or some otherwise clever wordplay, but (obviously) Is That the Sound of a Piano Coming from Several Houses Down?. With the alternate title, it is as though the collection isn’t overcome by the repetition, and the potential of repeating a structure that had worked in the past. It would be curious to know if his initial thoughts on the final publication of The Source was indeed an influence, as this collection was composed during the period he was most likely seeing The Source through to publication, as he writes as part of the acknowledgments: “These problems were encountered mostly in Brooklyn, NY, in the summer of 2010, lingering on in Denver, CO, until about February of 2011.”

In order to keep things straight, she tapes a timeline marking the important events of her novel to the bedroom wall. I think this could be the first sentence of my novel. The problem is it’s already written. 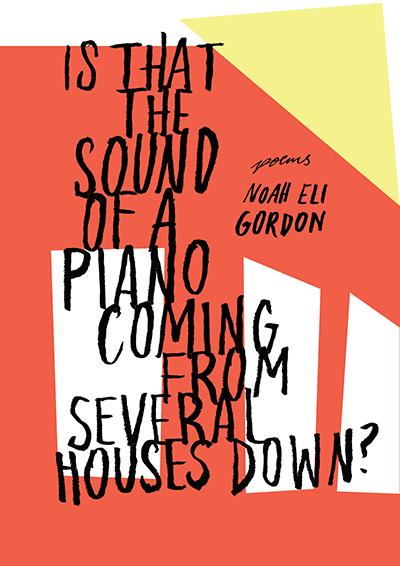 The poems are incredibly sharp, and composed as odd narratives, descriptive passages, alternate perspectives and even hesitant wisdoms, a number of which take their time to sink in, as any new perspective or wisdom might. The book is dedicated to American poet Sawako Nakayasu, “in return for the gift of her translation / of Ayane Kawata’s poem ‘Running Posture’ / in Castles in the Air,” a poem and book I’d been previously unaware of (although I’m an admirer of the work I’ve seen of hers). Discovering the poem online on the publisher’s page for the book (a book I now have to order, clearly), it reads:

I am being chased and so I run, though the problem lies not in the fact that someone is chasing me, but in the posture with which I run away.

The problem, Gordon might suggest, is that I haven’t read exactly all the same works he has, nor he me, altering the ways in which I might approach such a book as this. While I might not be aware of that particular translation, my initial take on the collection compared Gordon’s use of the prose poem, composed as a blend of gestural koan and short story, to Sarah Manguso’s short story collection, Hard to Admit and Harder to Escape (McSweeney’s, 2007). Manguso’s is a book that heavily influenced my own debut short story collection, The Uncertainty Principle: stories, (Chaudiere Books, 2014), both of which were composed out of a sequence of untitled and self-contained short, single-paragraph prose fictions that meet somewhere in the blend of essay, short story and musing (and a book, it would seem, I began working on during the same period Gordon composed Is That the Sound of a Piano Coming from Several Houses Down?). One might argue that all three collections, Gordon’s included, work from the founding premise that something is wrong (or at least amiss, or slightly off), and the awareness that there is always, constantly, something else happening in the poem, just out of view, out of reach and out of focus. What is curious about Is That the Sound of a Piano Coming from Several Houses Down? is in seeing the accumulation of poems structured around a similar premise, one that allows “the problem” to sometimes be the entire point, and other times, the distraction, and occasionally an idea that steps carefully out of the way of the poem, even while remaining the engine that drives both the individual pieces and the book as a whole.

He sends a hurried email to a distant relative detailing the particulars of his upcoming arrival—dates, places, a somewhat transparent formal tone, and immediately regrets not having done so in a more intimate fashion, with a postcard perhaps. Perhaps with this one, the one where the sun is either rising or setting, flanked by high clouds and flecked with pink, like the meat of a flower whose name he’s failed to learn. It’s as though he’s realized there was music playing because there isn’t anymore—the sudden silence of the world as much an indescribable flower as it is the description of one staring directly at it. The sun, rising and setting, setting and rising. But not, as we know, in that exact order.

There is something about the shift of the title that displays the strength of the collection, and what might have allowed this book to be as strong as it is, providing an opportunity for the structure not to overwhelm the work, and the author, perhaps, to himself step out of the way, and allow the work to shine through. I’ve been an admirer of Noah Eli Gordon and his work for some time, but this might easily be his strongest work to date, in part due to the subtlety of the poems, made so much more clear through the deceptive straightfowardness of the premise: Is That the Sound of a Piano Coming from Several Houses Down? is not, in fact, a book about problems or telling you what the problem might be. It is a book that focuses on all the small details that lead up to that point of declaring something, true or otherwise, to be the actual problem. Does that make sense?