I was a country of queer force

rushing east to see the strangest side of twilight

I have been taught to doubt my mother and fear tradition

I am very taken by this new erasure by New York poet and editor Chase Berggrun, their debut collection R E D (Minneapolis, New York, Raleigh: Birds, LLC.: 2018), a follow-up to the chapbook Discontent and Its Civilizations: Poems of Erasure, published by jubilat in 2012. And yet, to describe this book as purely an erasure would be to reduce, or even misunderstand it, as R E D is as much a book of reconstruction, of rebuilding, as Berggrun writes in “A Note on Process,” to open the collection:

R E D consists of twenty-seven erasure poems. They were produced using a system of formal constrains: text was erased while preserving the word order of the original source, with no words altered or added, according to a strict set of self-imposed rules. The poems use as a source the novel Dracula by Bram Stoker.

As the text of Dracula, a classic Victorian-era horror novel soaked with a disdain of femininity and the misogyny of its time, is erased, a new story is told, in which the narrator takes back the agency stolen from her predecessors.

This work was written at the same time its author had begun their own gender transition. As they were discovering and attempting to define their own womanhood, the narrator of these poems traveled alongside them.

I’m fascinated by the idea that such a book could emerge from a Victorian novel (one might presume that seeking the counterpoint against such repression would be an obvious target), especially Dracula, a book reworked and re-envisioned by multiple writers, including Winnipeg poet Dennis Cooley, who riffed off vampires and blood in his own Seeing Red (Turnstone Press, 2003). Berggrun’s project, on their part, is a far more intimate revision, writing on and through their own reconstruction, including their own gender transition; writing out a story of a narrator rebuilding their whole self from the ground up, utilizing the remains of the old self, and both eliminating and repurposing materials as required. In an interview conducted by Dan Brady, posted in November 2017 at Barrelhouse, Berggrun describes some of their thoughts on erasure:

I’ve been intensely studying poetic appropriation, and erasure in particular, for kind of a long time, and it seriously terrifies me. It scares me how easily it can become violent, and how often people use it in a violent way. It’s a poetic form, certainly, but it’s inherent politicality is both potent and dangerous, in a different way than, say, a sonnet in iambic pentameter. Not to say that any formal device is apolitical, but the way erasing interacts with another person’s work is an especially risky enterprise. Solmaz Sharif wrote a brilliant and important essay on this: required reading for anyone considering using erasure. This Robin Coste Lewis lecture is also incredibly necessary.

I tried to engage with Dracula in many other ways before I started to erase it: erasure was my last resort. Erasure is undeniably connected to the tools of white supremacy. It’s very, very easy to fuck up. I don’t believe, and never have believed, that every artist has a right to alter, appropriate, or work with any text they want: we’ve seen the racist result of this kind of mindset again and again. Kenneth Goldsmith, a person whose work and attitude I deeply abhor, is a product of that kind of thinking. John Gosslee’s erasures of Hoa Nguyen’s work, et cetera, et cetera. Examples are everywhere. 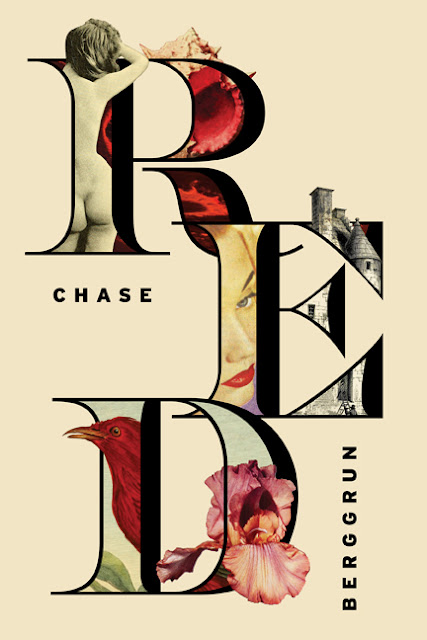 Berggrun’s language is staggered, direct and intimate, even as they use Stoker’s original words, in his original order. One can’t imagine Stoker writing, as Berggrun reveals in their own “CHAPTER XV,” such lines as: “I was surprised when unconsciously I imagined // the way his sperm dropped in white patches / which congealed as it touched my body [.]” I’m startled by how rich and how strong this collection is, and how deeply personal and intimate, which allow for such powerful results. And curious how Dracula, again, became the source material instead of any other particular title, although Frankenstein, or, The Modern Prometheus (1823), another book of creation, might miss the point, being a book of creation out of dead parts, instead of a book that simply revealed what had already been there, albeit hidden or repressed. R E D is a book of declaration that forces “I am here,” even as we witness this stunning and revealing metamorphosis.

One time I tried to take a human life

I tried to kill my own body      through prayer

a brain that a man fashioned for me

determined to destroy this woman’s nerve

I found in his absence a silence