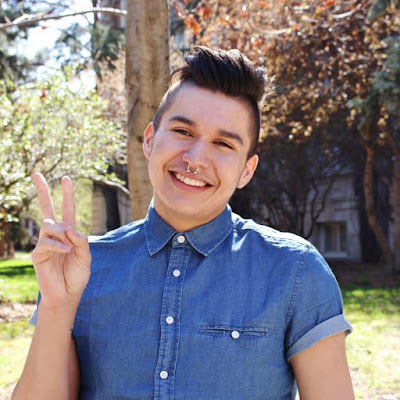 Billy-Ray Belcourt is from the Driftpile Cree Nation. He is a PhD student in the Dept. of English & Film Studies at the University of Alberta. He is a 2016 Rhodes Scholar and holds an MSt in Women's Studies from the University of Oxford. His debut collection of poems, THIS WOUND IS A WORLD, was named the best Canadian poetry collection of 2017 by CBC Books and is a finalist for the 2018 Griffin Poetry Prize.

Before I started writing poetry, I neatly envisioned a future in which I was an academic and nothing else. Poetry has opened me up not only to the seductions of experimentation, but also to another sort of relational practice, that of being with others via text. It changed my perception of where, how, and under what conditions one can pursue something like Indigenous and queer freedom. The book, THIS WOUND IS A WORLD, has definitely changed my life; it has brought me into conversation and kinship with a host of other writers and artists throughout so-called Canada. It was also recently shortlisted for the 2018 Griffin Poetry Prize, which is still something I'm trying to wrap my head around! The book is deeply queer and Indigenous and youthful and campy and sad, so it seems almost impossible that it's getting that sort of attention.

I should admit that I was writing academically first, which is a type of non-fiction. I think this mode of articulation is always underneath the poetry, it is its ideational infrastructure. Perhaps the theory with which I was grappling paved the road to poetry. Today, these slip-slide into one another and produce something that exceeds that which they do on their own. Poetry, like theory, was where I could turn an idea inside out, enflesh it, and make it vulnerable to others.

Questions about my process are tricky, because my hunch is that each poem or each project is differently motored. On days when I'm feeling any number of bad feelings but not slowed by them, the writing can come quickly. In my next book, NDN COPING MECHANISMS, I have a few poems that are procedural, which I experience as less resistant, as smoother. I'm not one, however, to throw words onto a page and be done with them. I edit as I write; I think on form and word choice and syntax, etc. So, I'm not sure that there is a "first draft" but something that is always being agitated, whether by me or others, an editor or an audience, etc.

The poems that make up THIS WOUND IS A WORLD began as feelings. They were shorter pieces that then were bound together, but they nonetheless orbited around key axes/thematics. The poems and prose that became NDN COPING MECHANISMS were differently composed so as to become a text, a unit, an assemblage.

As a queer Cree poet, I often read with other Indigenous peoples and/or queers. These are almost always enlivening and joyous! We visit and laugh and cry and it usually leaves me feeling inspired and readied to write again. I also dig readings because I get to test out jokes - I'm still holding out for a side gig as a comic haha.

Absolutely. I am bent on attending to the ways in which settler colonialism stymies livability for Indigenous peoples and how this is done by way of the entangled logics of white supremacy, homo- and transphobia, heteropatriarchy, etc. I am also part of a school of Indigenous thought that is about futurity, about how we might dream up and perform a world without dispersed suffering, one that is utopian and flourishing.

I don't think that one can speak about the writer as a position that is emptied of other loci of identity. So, the role of the queer writer and the role of the feminist writer might intersect with but are not the same as the white writer, for example. Perhaps I will say that Indigenous writers ought to ensure that their/our work gets to those who need it most/ to those it is about. This means creatively engendering new sites of distribution, review, and performance.

I think it can be either for a whole array of reasons (i.e., politics, ethical tenants, point of view, location (social and geographic)).

Anthony Oliveira (@meakoopa) recently tweeted: "be brave enough to be kind." As I see it, this is not, however, a call to disappear that which needs to be addressed out of anger or upset. Tracey Lindberg called the blending of kindness and critique "critical kindness." That is the mode in which I want to be in the world.

I'm a grad student and community educator, so my days are usually erratic. But, when I do write it's usually at my desk in my little apartment with folk music humming about. But, I tend to think up things on the go, so will write poems in the notes app on my iPhone.

I routinely retreat into texts I've read a bunch when I am stuck.

The smell of TIDE pods lol.

I study contemporary First Nations art, poetry, and film, so those do transform into sources of inspiration. One of my next projects is non-fiction and a bunch of it is writing vis-a-vis the art of artists like Fallon Simard, Joi Arcand, and Postcommodity.

I am influenced by writers like Anne Boyer, Fred Moten, Leanne Betasamosake Simpson, Claudia Rankine, and Maggie Nelson. I talk a lot about the first poem in Trish Salah's LYRIC SEXOLOGY.

It's been a quiet goal of mine to get on a reality TV show, especially The Amazing Race. Perhaps I should try speaking it into existence more. I also would like to eventually get into short filmmaking, but that is a long-term goal.

Sometimes I think about how I could've become a medical doctor, which is perhaps even more political an occupation in this day and age when Indigenous peoples and queer and/or trans people are subject to discrimination when seeking medical attention.

I often joke that poets are poets because we can't sing well (we'd be musicians otherwise). But, seriously, I write because it is a potent time and place to connect with those like me who might be hungry for writing about queerness and indigeneity.

A book that is underneath everything I write is Jose Esteban Munoz's CRUISING UTOPIA: THE THEN AND THERE OF QUEER FUTURITY. Two films I've been most affected by over the last couple years are MOONLIGHT (dir. Barry Jenkins) and LILTING (dir. Hong Khaou).

I just wrote a bunch of final papers for seminars I took this semester, so not a whole bunch right now. Soon, I will get back to my next project on Indigenous joy.

Posted by rob mclennan at 8:31 AM
Labels: 12 or 20 questions, Billy-Ray Belcourt, Frontenac House