[birdbrain] there’s a sequence called time: she’s sick, she dies, she’s still dead, no matter the voice, passive or active, but the other won’t have it that way not in that order or tense. It figures apprehension & owing. No promise or debt to pursue. Is it like grains of sand? like stars? what’s myriad? Not quite, without senses. Then while reading the letter by Bruce I find a compositional circle ringing & containing that draws us together. (“NOVEMBER”)

Constructed as a year’s suite of poems, Bay Area, San Francisco writer Jocelyn Saidenberg’s latest title, Kith & Kin (The Elephants, 2018) is composed as an elegy, one that weaves through confession and the domestic as well as the elusive details of the lyric. Compiled, seemingly, in chronological order, the poems accumulate as multiple poems-per-month from September to August, as Saidenberg both plumbs and alludes to the details of Beth’s (the exact nature of the relationship isn’t defined, but Beth is clearly an intimate) illness and death, and what occurs in the space of such heartbreak. Across forty-one poems, a period of care and caregiving eventually gives way to grief, and to absence, as she writes: “& it’s / too stupid to list those with whom / & a stupid list of losses those who abandoned / the dead & those whose suffering / held them possessed like those owls do” (“SEPTEMBER”). 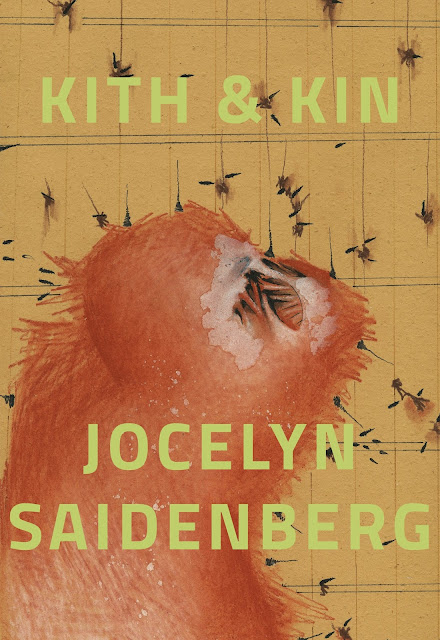 The author of four full-length titles—Mortal City (Parentheses Writing Series, 1998), Cusp (Kelsey St. Press, 2001), Negativity (Atelos Press, 2007), Dead Letter (Roof Books, 2014)—as well as three chapbooks—Dusky, Dispossessed, and Shipwreck—one can clearly see a thread or two emerge in Saidenberg’s work through her titles alone (this is the first collection of hers I’ve seen), one that does work to engage some darker, deeper elements of the personal, interpersonal and intimate, and the collection manages a fine line between language writing and narrative. Saidenberg presents the story slant, fragmented and allusive/elusive, but in the most straightforward manner possible, managing a lyric that embraces the full emotion of language and bodies, and everything the heart and the mind might want. As she writes at the end of the collection, in “some notes”:

Kith & Kin is born of a desire to write about what I tend to deny or avoid: my body, my organizational obsessions, the banality of my everyday, my mistakes and messes, that is, my desire to invite the exclusions in and to entertain the excesses. By attending to what my attention resists, my inattention, I had the hunch that in approaching my withdrawal, shame, and omissions, I might find myself in proximity to others, ones who mumble, who yell in rage, who are recently or long dead, who dream me at night, those who are lost to me, yet whose beings compose my beings. As Judith Butler writes: “I find that my very formation implicates the other in me, that my own foreignness to myself is, paradoxically, the source of my ethical connection with others.” We are traversed by others, by their traces and impressions. Who we are is never fully knowable, for we constitute an assembly of others and selves. In this sense, the writing summons and is summoned by others collectively, enigmatically as our elaboration of losses and assemblies.

Posted by rob mclennan at 8:31 AM
Labels: Jocelyn Saidenberg, The Elephants