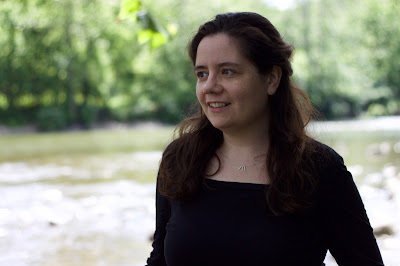 Annick MacAskill [photo credit: Heather Kirk] is the author of No Meeting Without Body (Gaspereau Press, 2018) and Brotherly Love: Poems of Sappho and Charaxos (Frog Hollow Press, 2016). Her poetry and criticism have appeared in journals in Canada and abroad, including Versal, Prism, Room, The Fiddlehead, PANK, CV2, Arc, The Puritan, Lemon Hound, and Bone Bouquet. Originally from Ontario, she currently lives and writes in Halifax.

My first chapbook, Brotherly Love: Poems of Sappho and Charaxos (Frog Hollow Press, 2016), gave me a beautiful, physical something to read from in public. My first full-length collection, No Meeting Without Body, due to be published in April with Gaspereau Press, will give me the same, I suspect (Gaspereau certainly makes gorgeous books). More than the objects themselves, my first chapbook and book both gave me the opportunity to work with experienced editors, and a touch more confidence.

My chapbook was a somewhat conceptual project, while No Meeting Without Body is a kind of juvenilia, a collection of my favourite poems written over the past few years, with no specific theme or concept behind it.

My more recent projects include my translingual erasure of Catullus, Medulla (Ill Meat), and a book of love poetry that revolves around the themes of communication and sound. I also have a few new poems on different subjects scattered here and there…

When I was about seven or eight, I used to write short lines in my notebooks. My mother called what I wrote "poems". I have no idea what I thought I was doing before that, but I've been using that word ever since.

I have no one method; for me, the process depends on the project, but I do tend to go through phases. For a few years, I resisted the common, post-Romantic conception of the poet as working simply and effortlessly from a place of inspiration, and looked at my creative writing as work. Inspired, I think, by the Renaissance authors I had studied (who wrote to make a living and who wrote in many forms and genres), I was ready to try everything and anything to ensure that I kept writing. But I've since become aware that certain projects excite me more than others; I can produce quickly when motivated, in a way that is not so clearly “work”, at least not initially. Neither method is preferable to me, just the result of different projects.

With a sound, a line, a feeling, a thought, an experience, a memory. I've published poems that were written in 30 minutes, and I have poems that have taken me a year or longer. Again, my process varies widely:

Brotherly Love was written over a year, in spurts, inspired by the discovery of two new poems by Sappho in early 2014. No Meeting Without Body was written and edited more or less steadily over three and a half years before I submitted it to Gaspereau Press. I had worked on the poems in the collection as individual entities before bringing them together in one manuscript.

Medulla (Ill Meat), my translingual erasure of Catullus, was written in a frenzy -- fifty poems in about six weeks. I worked mornings four or five days a week, for a few hours at a time. It was exhausting work (I often took naps in the afternoon!), and I was fortunate (?) to have been unemployed for long enough to pursue the work.

Currently, I’m writing my poems more slowly, producing drafts quickly but taking significant time to sit with them before editing. I still feel I need more time with the latest project, a book of love poems. I’ve been writing and re-writing one longer poem from the collection, for example, for over a year.

I enjoy readings, both as a listener and a participant. I think I am most fed when I attend readings by poets whose writing inspires me and who take care in reading their words out loud. I tend to enjoy reading in public, even when it makes me nervous, but I'm not sure it feeds my process to the same degree that listening does. Usually by the time I'm ready to read a poem in public, I've read it aloud to myself or a friend many times, so the benefit of listening to my own work has already had its effect.

Brotherly Love, a pseudotranslation, and Medulla (Ill Meat), a translingual erasure, allowed me to explore my interests in languages, translation, the limits of translation, and literary authority. Similarly, I’ve written paraphrases and adaptations of other classic texts, from Antiquity and the Renaissance, primarily... For me, the most successful translation (in terms of transmission of the original’s larger meaning – transmission of form is another interesting question) is often an adaptation, a version that can create significant stylistic and formal difference from the original.

My most recent project is informed in large part by a reflection on the nature and limits of human communication, and by the differences between language, sound, song, and meaning.

To listen, to witness, and to transmit, broadly speaking, though these roles are hardly exclusive to writers.

Essential. I have been lucky to work with keen and attentive editors, and am grateful for the experience.

Elizabeth Philips impressed upon me the value of finding writing peers to work with, and I am glad I heeded this encouragement. Writing friends are invaluable.

I have moved from poetry to critical prose to poetry to critical prose... it has not been easy, but it's been fruitful. My background in literary history and criticism has sometimes felt like a hindrance in my creative writing. Most of the scholarly articles and book reviews I've published have been in French, and moving back into English has been challenging, as has been returning to poetry after academic writing.

I was motivated to review books by contemporary women writers when I encountered stats put out by CWILA that highlighted a dearth of reviews of women’s literary writing in Canada. Reviewing felt like one tangible way I could contribute, and I had already reviewed a number of scholarly books, so felt like I was reasonably well equipped.

But popular critical prose (the kind published in literary journals) is quite unlike academic prose. The transition from academic criticism to popular literary criticism wasn’t much easier than the transition from academic criticism to poetry or poetry to popular criticism, although at this point I’ve published about a dozen book reviews in literary venues. All three forms certainly feed each other, but in indirect ways. For me, they're almost different languages, and to move from one to the other remains difficult, though worthwhile.

When I'm working (I currently teach at a university, as a part-time faculty member and writing tutor), I have no set writing routine. I work in the spaces I can find. When I am fortunate enough to have more time to myself, I prefer to write in the morning, when I am the most focused. Editing seems to work fine for the afternoon and evening, as does the business of submission and other small tasks.

Other poets, history, birdwatching, and memory. Like many other writers, a good walk also seems to help.

I've lived at some thirty-odd addresses in about as many years. I don't think I understand what most people mean by "home", and associate no one scent with the concept.

I recently read a new poem by Evelyn Lau, in which every single line break was exactly where I would have put it. The experience was startling -- I read Lau voraciously in high school, but am not familiar with her more recent work. Realizing that Lau’s verse had almost certainly influenced my own ear confirmed something I had long suspected – that I am not always aware of which writers have been the most important for my work.

In terms of what I’m currently reading, these days I find myself seeking out poems by Louise Glück, Arleen Paré, Colette Bryce, Karen Solie, and Souvankham Thammavongsa. Some classics I return to again and again (I like repetition) -- the Hebrew Bible, Ovid, Sappho, Petrarch, Joachim Du Bellay, Louise Labé, Agrippa d'Aubigné, Emily Dickinson...

In another life I’d like to be an astrophysicist. I’d also do just about anything to work with birds, especially geese.

I could never stop. There were always, at the very least, lines in the margins of my notebooks, drafts on the back of receipts.

The Girls with Stone Faces by Arleen Paré. Moonlight by Barry Jenkins.

Several reviews and a couple translations. I look forward to having a few weeks at the end of term to look over my recently completed drafts. And I’m always working on new poems, here and there.