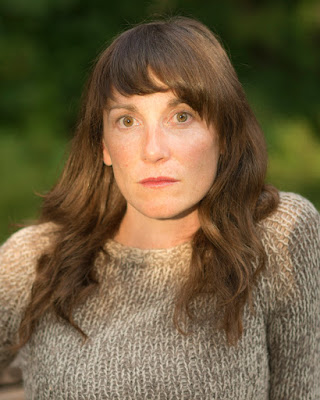 Emily Nilsen was born and raised in Vancouver. Her book of poems, Otolith (icehouse, 2017) was published shortly after the chapbook Place, No Manual (Lake, 2017). She now lives in Nelson, BC.

1 - How does your most recent work compare to your previous? How does it feel different?
The timescale feels different. Most of the poems in Otolith were written in the last three years, but it took over a decade to get to them. I had to hike through some really dense thicket before arriving at a clearing where the book poems lived. I’m not sure how long it will take to bushwhack through to another set, but hopefully less.

2 - How did you come to poetry first, as opposed to, say, fiction or non-fiction?
I try to write fiction and it ends up being a poem. I have written non-fiction essays and love the feeling of stretching the words out. Big open skies.

3 - How long does it take to start any particular writing project? Does your writing initially come quickly, or is it a slow process? Do first drafts appear looking close to their final shape, or does your work come out of copious notes?
It varies. Some poems come out fast and fully formed. Others (and this is more the norm) are squeezed out of a rock. The fast ones are a joy. The slow ones pin me for weeks. Sometimes I’ll draw a poem first and then wait for it to turn.

4 - Where does a poem usually begin for you? Are you an author of short pieces that end up combining into a larger project, or are you working on a "book" from the very beginning?
I usually set out thinking of something larger and then get blindsided by random questions that lead to smaller poems, which then either slide back into the big picture or they go out on their own. I have a folder called ‘orphans’ for the random ones. Maybe eventually they’ll form familial connections and I can call it a book.

5 - Are public readings part of or counter to your creative process? Are you the sort of writer who enjoys doing readings?
I’ve only just started to enjoy readings. Before, they were mostly panic inducing: all those eyeballs looking up. But, it’s good to give the poems a human vessel and make words more than a series of symbols on a flat page.

6 - Do you have any theoretical concerns behind your writing? What kinds of questions are you trying to answer with your work? What do you even think the current questions are?
My first book and chapbook were released in 2017. Since then I’ve been circling around, trying to coax myself away from exploring the same questions. I’m giving in to the fact that, really, nothing has been resolved and that’s ok; there are (or should be) infinite answers to even a handful of questions, and vice versa. I’m mostly concerned with the insanity and absurdity of human beings, presences and absences thereof, disease, and the meaning of landscape - with or without us.

8 - Do you find the process of working with an outside editor difficult or essential (or both)?
For me, essential. The editors I have worked with have climbed into the poems and looked at them from the inside out. I need someone to kick the dust around.

9 - What is the best piece of advice you've heard (not necessarily given to you directly)?
Last fall I went to a residency at the Art Shed in Sointula, BC. I went to write but when I got there the tank was empty, no fumes. Blank. I’d look out at the incredible-ness of humpbacks sighing and feeding just off-shore, hoping there’d be a flicker. There wasn’t. That emptiness is the worst. I’d met up with a friend there, who shared a quote by Maggie Nelson on accepting “the soggy, ill-defined but probably necessary periods between monsoon and drought.” I’m trying to get comfy with the feeling of nothing, when it moves in. That advice helped.

10 - What kind of writing routine do you tend to keep, or do you even have one? How does a typical day (for you) begin?
It’s all over the place. Early mornings are the sweet spot when I’m at home. But mostly I need to hermit off somewhere for a long time to get going.

11 - When your writing gets stalled, where do you turn or return for (for lack of a better word) inspiration?
A walk, water bodies, bookshelf.

12 - What fragrance reminds you of home?
Salt air. Wet pavement.

13 - David W. McFadden once said that books come from books, but are there any other forms that influence your work, whether nature, music, science or visual art?
All of the above. Parts of Otolith were written while at the Salmon Coast Field Station, a research house in the Broughton Archipelago. I loved the rigor, results, careful observation, discovery and language of science. Years earlier, I’d worked as a field assistant there and all the counting and measurement reorganized itself and morphed into a poem. Also, photography. I picked up Eugene Richards’ book The Blue Room in 2012 and it has stayed with me ever since.

14 - What other writers or writings are important for your work, or simply your life outside of your work?
Too many to list, really. Any writing that points towards something, that holds my head in place and forces me to look.

15 - What would you like to do that you haven't yet done?
If I could, I’d write a novel or make a film. A long project that may or may not be synced with reality.

16 - If you could pick any other occupation to attempt, what would it be?
Something more ergonomically satisfying and with more movement…

18 - What are you currently working on?
Always poems.