I never met my great-uncle, Dick Stryker.
But about ten years ago, while visiting family, I found his copy of Joyce’s Ulysses; the inside cover was stamped with his name and the pages were dotted with marginalia.
I asked my parents who he was, but it had been so long since anyone had mentioned him that they could barely remember the rumors; he was a pianist and a composer; he was jailed for being a conscientious objector during World War II; he spent two years in a prison in Ohio; his father kicked him out of the family; he moved to New York; he was gay; he was an alcoholic; at some point, he burned his face off somehow; he might have been homeless for a time; he refused to have anything to do with his family.

I wanted to know more, I wanted to feel a slightly stronger mild connection to this person I’d never heard of. 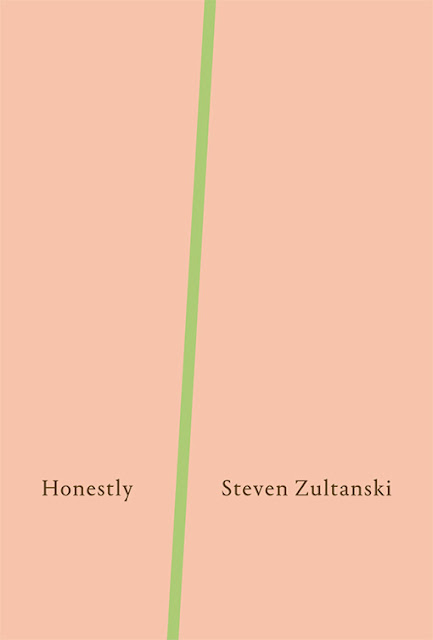 Steven Zultanski’s latest, the poetry title Honestly (Toronto ON: Book*hug, 2018), is a memoir-esque collection of untitle narrative lyrics/lyric narratives that, once opened, is extremely difficult to put down again. The book opens with the story of searching out details of a newly-discovered relative, attempting to piece together the life of a great-uncle he hadn’t know of previously, writing his lost relative’s way back from silence. The pieces that make up this small collection are quite curious in their ability to exist as short, personal monologues, composed in such a straightforward, and deeply personal way, that the effect is incredibly compelling. Why have I not been reading more Steven Zultanski?

What becomes interesting throughout the collection is how the opening element that suggests memoir turns and twists on itself rather quickly, shifting in and out of focus from potential memoir into fiction. One begins to wonder: Is any of this true? Does it matter? Perhaps the suggestion that it does is what provides the initial hook, taking the reader along for the ride into shadowy and impossible depths. The rush here is considerable. The rewards are multiple.

So Lydia’s metaphor doesn’t really work, but I like metaphors that don’t work.
They bring distant things together without subsuming one into the other, amplifying their differences while establishing a skewed relation.

Even better, this metaphor also fails by working too well: it could be applicable to most any situation.
It’s simultaneously obvious and abstruse: you know what she’s saying about how misunderstands evolve from lopsided communication, and yet it’s hard to draw any specific insights from the comparison between human love relationships and weather.
That’s why I like it so much
It reaffirms a general idea, but inconclusively.
As if abstract generalizations could be real and true, but only as details in stories traversed with other details—some of which cluster together as if seeking commonality, and some of which float away.

Posted by rob mclennan at 8:31 AM
Labels: BookThug, Steve Zultanski