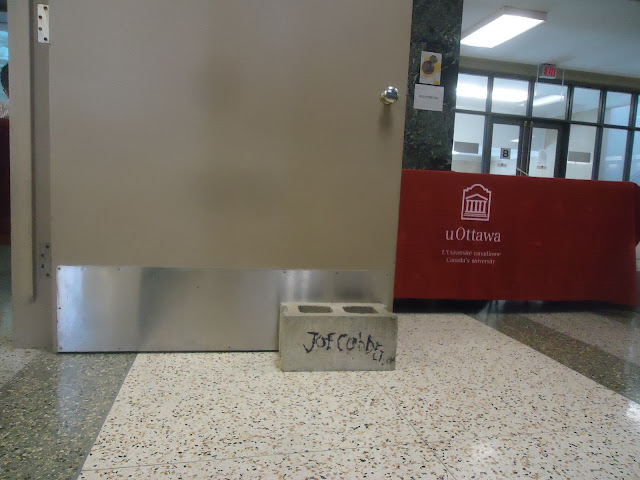 Last weekend, I was fortunate enough to attend much of Kanada Koncrete: Material Poetries in the Digital Age, the Canadian Literature Symposium at the University of Ottawa for 2018, organized by Robert Stacey and Claire Farley. I’ve been to a number of the annual conferences at the University of Ottawa over the years, from the Long Poem Symposium back in 1996, to conferences on Modernism, Al Purdy, Postmodernism and Robert Kroetsch, but this was far and away the most vibrant and exciting conference I’ve attended (and I was able, in case you hadn’t seen, to produce some chapbooks specifically for the conference – Derek Beaulieu, Amanda Earl, Arnold McBay + Gregory Betts and Tim Atkins – as well as some very recent titles by other participants (who hadn’t actually mentioned “I’ll be in your city two weeks after you produce that”) – Dani Spinosa, Kate Siklosi and Sean Braune – so the whole conference, between them and a variety of others, felt awash with above/ground press authors (Porco! Barwin! Baker! Anstee! Schmaltz! Davey!). 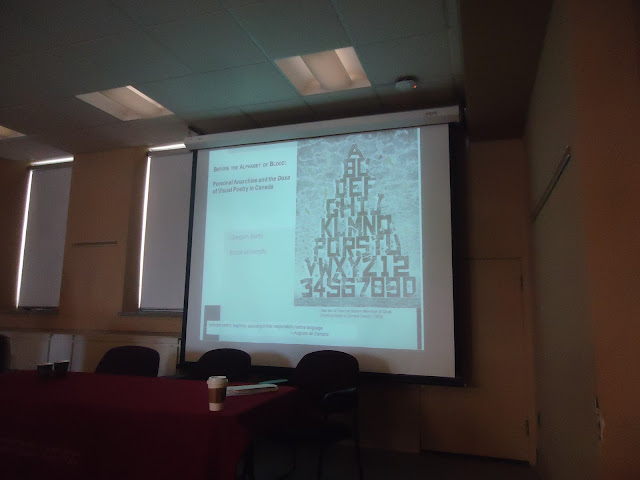 There were some remarkable papers presented, from Tim Atkins’ paper exploring some of bill bissett’s early, pre-Vancouver influences, Cameron Anstee’s paper exploring some of his ongoing work on the late artist Barbara Caruso (specifically her presspresspress), Zane Koss on the poetry networks of Louis Dudek and Marshall McLuhan in the 1950s, Natalie Leduc’s paper on Rupi Kaur as poetry activist (she presented a great argument for such), Paul Barrett on Sandra Djwa’s digital work from 1970, and Michael Nardone exploring the differences and constructs of digital archives vs. repositories, specifically UBU Web, PennSound and the Electronic Poetry Center. 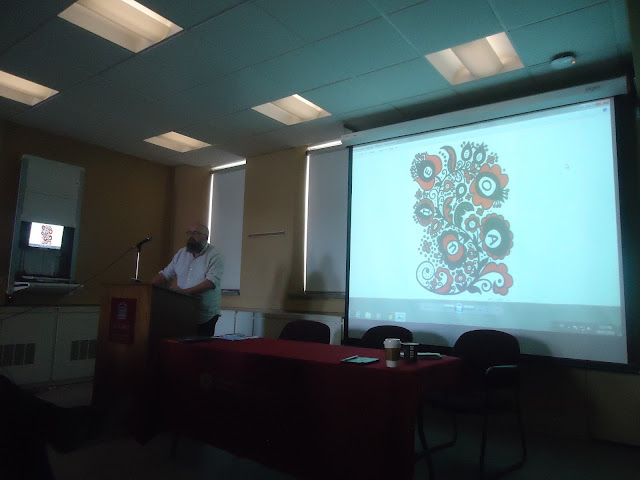 What was impressive, as well, was the fact that there were so many performances, all of which (unfortunately) I managed to miss, due to overload (and the requirements of children), including an evening of some twenty-one poets performing (all of whom were also presenting papers at the conference), and sound poetry by Gary Barwin and Stuart Ross, and jwcurry’s sound poetry ensemble Quatuor Gualuor. It would be difficult to highlight every paper that struck me, as that really would be the bulk of what I saw, but some of what I did find quite amazing included: Jessica Bebenek’s work translating T.S. Eliot’s “The Waste Land” into a knitting pattern, exploring the canon of the male genius through textiles; Amanda Earl and Eric Schmaltz’s artists talks, both of which focused on their own works, from Earl’s work-in-progress “The Vizpo Bible” to Schmaltz’s debut poetry collection, Depths of Surfaces (Invisible); and David Jhave Johnson’s “Aesthetic Animism: A Synthesis,” which moved at such a rate and depth of knowledge and information that it left all in the room reeling. While I did miss a handful of papers, including Johanna Drucker’s talk on Saturday afternoon, the Closing Plenaries on Sunday by Gregory Betts and Derek Beaulieu were spectacular, with Betts exploring the origins of Canadian concrete and visual poetry emerging almost entirely and organically from visual art and an interest in the multi-discipinary (and almost completely unaware of international movements concurrently happening worldwide), while Beaulieu went through a series of contemporary female practisioners currently exploring new realms of concrete and visual works, including Helen Hajnoczky and Erica Baum. 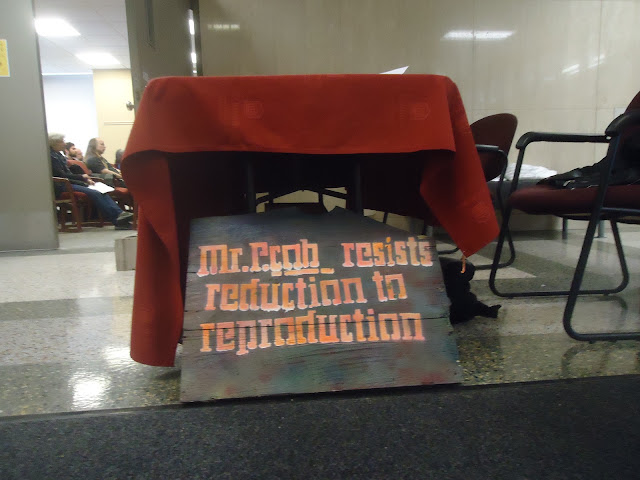 And of course, jwcurry brought some prints of concrete/visual poems to display around the space, including works by P. Cob, Daniel f. Bradley, Judith Copithorne and Michael e. Casteels, such as a piece printed directly onto a cinder block.

I’m abuzz after so much activity, myself.