Annick MacAskill, No Meeting Without Body

One hungry afternoon
I ate an entire orange peel,
told my sister it tasted like the sun.
The neighbor gave birth to twins
and my mother returned with blood under her nails.
As crass as a teenager, my grandmother
moved in. Her moonlit flower-picking
became an escape attempt
that failed. We made six apple pies
one weekend. No one
could say no. I implored the skies,
tied my hair in twists
every night so it would curl.
Every morning the curls fell limp,
an argument I couldn’t win. 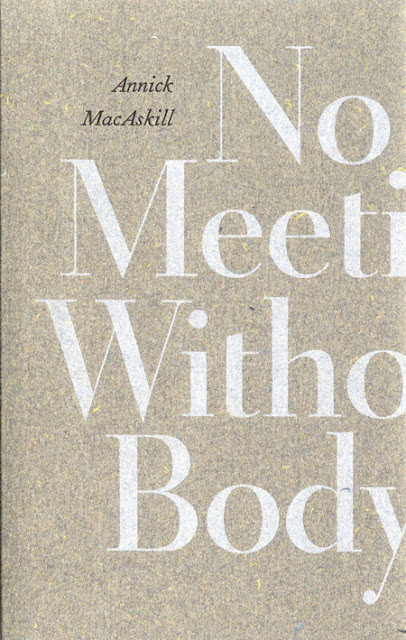 Lyric precision and lyric polish aren’t, as I might not really need to explain, the same thing. And while my interest in the lyric doesn’t necessarily gravitate towards the polish of a more straightforward line, there is something about the poems in Halifax poet Annick MacAskill’s debut, No Meeting Without Body (Gaspereau Press, 2018), that compel my attention. Her poems are narrative, sure, but hardly straightforward, achieving an accumulation of thoughts and movement, as well as the occasional narrative disjunction and disruption, composed as polished poems both precise and slightly jagged, slightly off; punchy and visceral. She knows how to compose poems that suggest one purpose, and provide something slightly different (such as her attempts to twist certain Canadian standards), all while moving through a series of meditative, first-person lyric narratives. The poems in No Meeting Without Body range from good to compelling, and often with such a nebulous difference between that it becomes difficult to articulate. Needless to say, there are a couple of poems here that left me breathless.

where tawny leaves blocked the drains.
You were asking why we call the month
September, coming back from a friend’s

Apartment and kissing me as if you expected
answers along my gums.
I tracked the whale sounds

of your indifference and the ways crowds
lifted their feet for us to follow. A man
on the sidewalk held a sign that said

Will Poet for Food. You referenced your treatise
on disappointment with a hand
on the small of my back, your eyes

on what you swore was a cormorant
hanging in a butcher’s window. Later
I lost three years and the sight of you

to a bottle of Shiraz. But fall, that’s permanent.
I was on your street at the wrong hour
and you smelled of pine.