Post-glacial: The Poetry of Robert Kroetsch, selected with an introduction by David Eso

Kroetsch’s errant career in poetry is characterized by slow-moving divergences and a focus on place (shaped and shaping). For these reasons, I suggest “post-glacial” as an alternative to the classification “postmodern.” A term borrowed from geography, post-glacial refers to the Holocene (the past ten thousand years and counting), the present moment (despite the continued presence of high-altitude glaciers), and equally to an indeterminate future period (a possible future wherein no glaciers remain). Post-glacial refigures in spatiotemporal terms postmodern concepts such as trace, spectre, or the presence of absence—concepts promoted by Jacques Derrida and others. “Trace,” in its postmodern sense, means that the past is never past. Drumlins, erratics, eskers, and even the flatness of the great plains are the visible work of Pleistocene ice sheets. That past haunts the present through the presence of year-round ice high up in the Rocky Mountains. These are post-glacial times we live in, although some glaciers remain. Past is now. Future arrives ahead of time. Glaciers do not melt. Ice melts. Glaciers retreat, recreating the land that remains always subject to revision. Similarly, the voices of the poet’s parents recur with increasing clarity, posthumously. Another parallel: the great literary traditions of history survive in Kroetsch’s work—quest, romance, satire—through subversive response to the weight of those inherited items. (David Eso, “Introduction”) 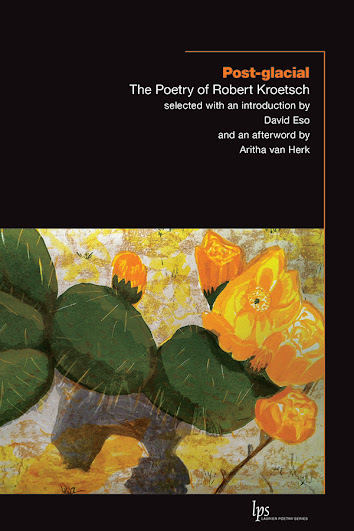 Given the pre-pandemic and pandemic distractions around these parts, I’m only just now seeing Post-glacial: The Poetry of Robert Kroetsch, selected with an introduction by David Eso and an afterword by Aritha van Herk (Waterloo ON: Wilfrid Laurier University Press, 2019), produced as part of the series of critical selected poem volumes in the Laurier Poetry Series. It is important that a poet such as the late Robert Kroetsch is assessed and reassessed, not only through his work but our relationship to such, given he is and was such a large presence across Canadian literature, and for so many years. Over the past few years alone, we’ve seen broad reassessments of Kroetsch’s work, thanks to Dennis Cooley’s book-length critical work, The Home Place: Essays on Robert Kroetsch's Poetry (Edmonton AB: University of Alberta Press, 2016) as well as the collection Robert Kroetsch: Essays on His Works, edited by Nicole Markotić (Toronto ON: Guernica Editions, 2017), as now Victoria, British Columbia poet and critic David Eso has put together this new critical selected that focuses on the “poet” aspect of Kroetsch’s work, examining the late tall tale theorist and storyteller through the lens of his poetic output. As Eso’s introduction offers, writing on Kroetsch’s engagement with the long poem: “A broadening identification with Western Canadian geography and dialect had combined productively with a deepening understanding of deconstructive poetics vis-à-vis the international postmodernism explored by Foucault, Said, and Spanos. Through these paired phenomenological and theoretical influences, Kroetsch uncovered the endlessly expansive form in which he would excel—the long poem.” There is an irony to examining Kroetsch as the poet of the long poem through such as small assemblage of pieces, and yet, Kroetsch was the master of a “long poem” that was, in many ways, less a singular, extended unit than an assemblage of multiple, moving and even constantly-newly-incorporated parts. The further he wrote, the larger the shape of what would become his life-long poem would seem. Readers would ask: Is that it? Is there no more? And Kroetsch would answer that the project was complete, and there would be no more. And then there would be more. Wasn’t that the wry joke of “Completed,” through his Completed Field Notes (Edmonton AB: University of Alberta Press, 2000)?

As well as selecting from his more formal collections of poems, there are more than a couple of wayward Kroetsch offerings included here, including from his 2009 Wrinkle Press chapbook, The Lost Narrative of Mrs. David Thompson / Ten Simple Questions for David Thompson, his long out-of-print disOrientation chapbook, Revisions of Letters Already Sent (1993) and his 2011 Greenboathouse Press chapbook, Writer’s Block [see my review of such here], although neither his above/ground press title, Further to Our Conversation (2011), nor his The New World And Finding It (Salt Spring Island BC : mother tongue press, 1999) see mentions here. I’ve long thought that these assembled chapbook titles, none of which fell into any of his other published collections, would have made (and still can) an interesting stand-alone poetry title, as all easily fit into the container of Kroetsch’s “Field Notes.” Eso also includes a few other “lost” poems, such as a poem that appeared in The Rocky Mountain Outlook on June 30, 2011, and another, “Tourist from Toronto,” from an issue of James Reaney’s alphabet (1967); Eso’s engagement with the outliers make for an interesting perspective, not solely focused on Kroetsch’s singular, life-long poem that eventually formed as Completed Field Notes and subsequent titles, The Hornbooks of Rita K. (University of Alberta Press, 2001), The Snowbird Poems (University of Alberta Press, 2004) and Too Bad: Sketches Toward a Self-Portrait (University of Alberta Press, 2010). Elsewhere, I’ve argued that The Hornbooks of Rita K. was Kroetsch’s first overt expansion beyond the boundaries of what seemed to be a catch-all of his ongoing “Field Notes,” and it was only the structure of his subsequent collection, The Snowbird Poems, that brought The Hornbooks, as well as itself, into the structure of those “Field Notes.” As Eso examines Kroetsch’s approach, and argues the ways in which Kroetsch’s poetry and poetics were formed, shaped and evolved, it does seem, as much, that Eso has provided verification that everything Kroetsch wrote, at least through his poetry, fall within the bounds of that endless, boundless shape of “Field Notes.” Would a subsequent volume of poetry, containing everything Kroetsch wrote and published, be called, therefore, Absolute Field Notes? Infinite Field Notes? What is more complete than complete?

In this poem my mother is not dead.
The phone does not ring that October
morning of my fourteenth year.
The anonymous voice on the phone

does not say, Call Arthur to the phone.
our hired man, a neighbour’s son, quiet,
unpretentious, a man from the river hills
near our farm, does not turn from phone,

he does not say, seeming to stress the time,
Your mother died at ten o’clock. My sister and I
do not look at each other, do not smile,
assuring each other (forever) that words are
pretenders.

I wash the cucumbers. My mother asks me
to go pick some dill. The ducks are migrating.
I forget to close the garden gate.