Last year, we explored movement—we moved together and saw how the pieces moved us—in our thinking as the pandemic took hold. This year, we only had the present: any sense of futurity was unknown and remains so. Our collective uncertainty propelled us toward the reliance on technology and redefined how we experience community. To glitch is to interrupt the present and imagine a future. The glitch evades time and makes time visible to us. It opens us to chance and possibility, calls on us to respond to its behavior. This issue, we experimented with an open-call, glitching P-Queue and its editorial process. Opening ourselves to how people might respond, we left the theme and its interpretation to our writers. P-Queue itself was a glitch and it demanded a response from its contributors and editors.

A glitch is a slippage, something that finds its way through the crevices and into shared space, the networks that pull us together. In lieu of our insights into each writer’s work, this editor’s note leaves guided explanations behind the interface, makes visible the reader’s own attention and proposes the act of thinking as remedy.

In the spirit of glitch, the works have priority in staging their own interruptions while imagining futures otherwise. (“EDITOR’S NOTE”) 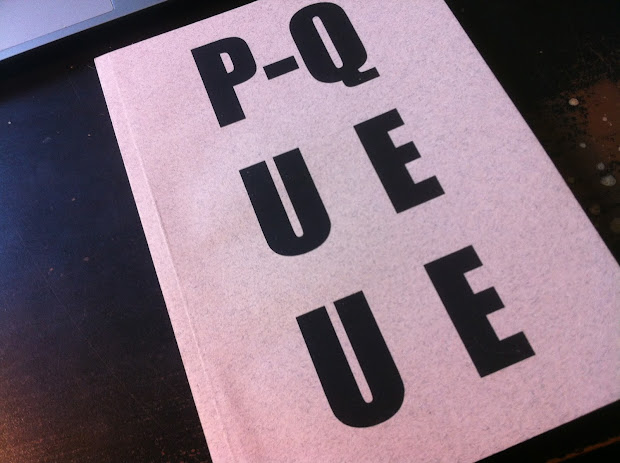 Given it took two attempts for editors Dana Venerable and Zack Brown to send me copies of the latest volume (originally I received an empty envelope in the mail, as the glue-seal had become undone), I was highly amused to realize that the eighteenth volume of the annual P-QUEUE out of the English Department of SUNY Buffalo is subtitled “Glitch.” I mean, that’s just perfect, right? (Maybe too perfect: was that original mis-mailing part of a larger promotional ploy?)

This is the second volume edited by Venerable and Brown, after last year’s “Movement” [see my review of such here]. I’ve long been a fan of the journal, and am still hoping to fill the holes in my collection, if possible [see my reviews here, also, of sixteen, fifteen, fourteen, ten to thirteen, seven and eight, and five], so if anyone has copies of, say, issue nine or six or four or three or one (I had work in volume two), please let me know. The excitement of seeing a new volume of P-QUEUE comes from knowing there is a consistent level of quality and highly engaging work in every volume, predominantly from writers I’m being introduced to for the first time (most of whom seem not yet to have produced a full-length collection, so this really is an opportunity to catch work by emerging writers around SUNY Buffalo as it is happening). This volume includes the same, as well as two writers I’m already familiar with: Rebekah M. Devine, J.B. Stone, Courtlin Byrd & Brent Cox, Alice Hall, Ariana Nadia Nash, Nathan Austin, Kathy Lou Schultz, Jed Munson, Brooke Bastie, Nat Sufrin, Callie Ingram, Barrett White, Corey Zielinski, Katie Naughton and Nathan Alexander Moore. There is always such an enormous amount of energy in the works contained in each volume, always with an impressive range of style and structure between the poets included, offering an incredibly high quality of work.

I’m fascinated by Los Angeles poet Nathan Austin’s (who apparently had a publication recently from Kyle Flemmer’s The Blasted Tree) four poems included in this issue, which offer a simultaneous play of visual and sound, working to potentially disrupt and entangle meaning while possibly even offering a phonetic play of what could be mispronunciation or a heavy spoken accent—I immediately imagine someone versed in Scottish Gaelic, for example, being phonetically translated from their spoken English into written form.

in the icy confetti sent from the skies

I’d already been aware of some of the work of Buffalo poet and critic Katie Naughton, having produced a chapbook of hers, so it is good to see further work. I’m fascinated by her poems included in this volume, such as the poem “from Paralegal,” set as an evocative tower of phrases, one set on top of another:

I don’t know how else to convince you that these volumes generally, and this one specifically, are worth picking up and reading if you aren’t paying attention. I could mention the staccato lyrics of Buffalo poet Alice Hall, displayed in the handful of poems included here, as the poem “F.T.L.” opens: “the water leaking in Penn Station, dressed / like arm loops. such / collapse in the knees of revision.” There are the long, languid contemplations of Austin, Texas-based Nathan Alexander Moore (another recent above/ground press author), including the opening to “Looking in the Mirror as a Form of Time-Travel,” that reads: “I look at you & wonder what it’s like on the otherwise of / sharpness. / Are you coming to meet me from some distant past or an / unsettled future? / Does time flow backwards or forwards for you?” There is the sense of structural play on the visual/lyric “glitch” of Callie Ingram’s “To Me Good Used To Be,” and some very cool erasures by Ariana Nadia Nash. Or the powerful rhythms and thoughtful cadences of the poems by South Dakota poet and scholar Kathy Lou Schultz, such as her piece “Peaks,” that reads:

Sentences give rise to duration. Dilation. An opening.
How many centimeters measured.
Counting not consciousness.
Duration. Or waiting. The medicine doesn’t arrive.
Women have been doing this.
Haven’t we figured it.
Waiting. A black line peaks. A pressure. Rates race, reduce.
Oxygen: Saturated. Or unsaturated?
Pain peaks unrelieved. Only needles then. If only a kind word.
Why couldn’t you?
You had one job.
Peaks or piqued. Stimulated or irritated? They do this every
day so they don’t
See my face.
Irritated skin rubs cuts. Taped together like a broken doll.
You don’t
Hear his cries.
Cuts unform the body. Not dilated but opened. Exposed to air.
The body
Reforms angrily. A scar.