Does
the sun
come up?

It’s only
a property
question.

“Over and
Over” heard
overhead.

By thick,
I mean
dense.

By dense,
I mean
tall. 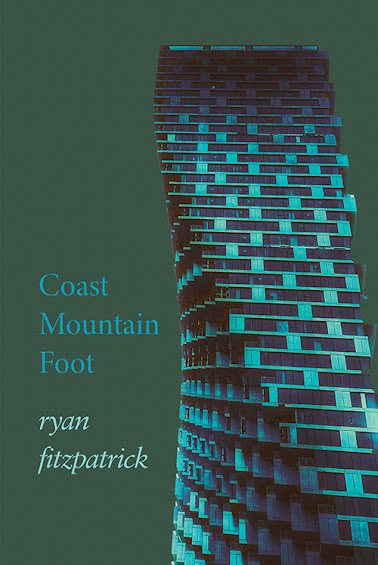 As a long-standing enthusiast of the ongoing work of Vancouver poet and troublemaker George Bowering, I’d been curious to see Toronto-based poet and critic ryan fitzpatrick’s third full-length collection, Coast Mountain Foot (Vancouver BC: Talonbooks, 2021), shaped as an interaction with and reaction to Bowering’s classic (and one of three poetry titles which won him a Governor General’s Award for Poetry, alongside The Gangs of Kosmos and Two Police Poems), Rocky Mountain Foot (Toronto ON: McClelland and Stewart, 1968). The proper response, it is said, to a poem is another poem, a mantra that writers often stretche out into the book as well, but rarely so directly; and it becomes interesting the way in which fitzpatrick chose to react to a book fifty-some years after it was first published. As fitzpatrick writes as part of his “NOTES” at the back of the collection: “Coast Mountain Foot refracts the gesture of George Bowering’s 1968 collection Rocky Mountain Foot – a book where Bowering, upon moving to Calgary for work, proceeds to write (and often complain) about the city for over a hundred pages before ending the sequence with a triumphant return to Vancouver. Rather than return the favour, Coast Mountain Foot responds to my own move from Calgary to Vancouver in 2011 by interlacing the connections and conflicts between the two cities. The work here was written in both cities over the span of a decade and a half. […] The short-lined lyrics that make up much of the book were written between 2016 and 2018, often during quick breaks from writing my doctoral dissertation on space and poetry in Canada. They came out of an attempt to write poems on my phone while writing the bus and, even though I had to stop writing on transit because of motion sickness, the poems retain a focus on quickness and movement.”

While certainly not free from complaint, Coast Mountain Foot is very much a long poem, book-length, segmented into individual and self-contained poems. Through a segmented lyric, it is as though the entire project is composed through blocks of lyrics that accumulate into narrative stretches, point by point by point. “Something / about bridges / as a metaphor.” he writes, to open “THE WORDS TO SAY IT,” “The wet feeling / of everything / outside the body. // That’s the city / you’ve been / living in.” There is something interesting in the lyric blocks he shapes to build his house, his Coast Mountain Foot, utilizing a structure that could even be assembled into different patterns and different poem-shapes, while potentially providing this collection similar kinds of conclusion.

We don’t
want to
erase history,

but do
want to
fill in

the gaps we
made draining
the inlet.

What do
the internet
comments say?

Something about
not paving
over the past

fitzpatrick has long been attuned to elements of class, colonialism and a clipped, accumulative language, and his work reveals a unique blend of Calgary and Kootenay School of Writing experimentation, as evidenced through the cavalcade of small publications around his original Calgary-shaped long poem “The Ogden Shops,” to his full-length debut, Fake Math (Montreal QC: Snare Books, 2007) and later, Fortified Castles (Talonbooks, 2014) [see my review of such here]. His work has evolved from the fragmented lyric of the prairie long poem to something more socially and politically engaged, and simultaneously further lyrically-fragmented and all-encompassing, piecing together what can more easily be seen as a deeper and larger engagement. “Can I live in / Vancouver without / writing about it?” he writes, to open the poem “YET ANOTHER LONG POEM / ABOUT VANCOUVER,” “All that work / done better in / the last century // even if the / freeway traffic / is still moving.” Throughout the collection, fitzpatrick references geographically-specific literary titles such as Roy Kiyooka’s Pear Tree Pomes (Toronto ON: Coach House Press, 1977), Helen Potrebenko’s Taxi (Vancouver BC: New Star Books, 1989) and Daphne Marlatt and Robert Minden’s Steveston (Talonbooks, 1974), although I’m curious about other examples that could have been woven into his Vancouver discourse, but aren’t, at least overtly (Michael Turner’s 1995 poetry title Kingsway, for example, might have been an intriguing echo to examine). I’m still working to figure out if fitzpatrick’s focus was on a particular era of writing, or simply what was on his radar. For fitzpatrick, Coast Mountain Foot is an articulation of and commentary on social, architectural, urbanized and political space, and on how space is utilized, simultaneously writing Vancouver and writing Calgary, and offering counterpoints between them. “No wall / left unmuralled.” he writes, to close the three-page “IT LIVES UP A DEAD SPACE,” Love in the / time of parking. // More New / Urbanist horseshit // about the form / of the city.” Or, the poem “URBANIZATION AS METHOD,” that includes:

Don’t get
too attached
to models

I mean,
my everyday
is pretty small.

Tied to the utopia
of not needing
to drive everywhere.

There is, as I said, an interesting interplay of influence between Calgary and Vancouver; shades of Jeff Derksen and Colin Smith against his own Calgary-influenced origins, working through his Bowering-inspired lyric study around the “social intimacy” of two particular western Canadian geographies. His sequence “BAD MAPS” might be the best example of this, crafting five short bursts of untitled stanzas to close the collection, one to a page:

He might lift the framing from Bowering (who relocated from Vancouver not directly for the sake of “work,” but to attend the University of Calgary), but there are cadences and line-breaks that feel more akin to that of Vancouver poet Fred Wah, a poet who held a teaching position at the University of Calgary for quite a long period (including during fitzpatrick’s own University of Calgary student-tenure), before retiring in 2005 and returning, himself, back to the coast. Even the suggestion that much of this collection was first composed in-transit, offering a way to interrupt and trouble his thinking, is comparable to Wah’s “drunken tai chi”: distracting the conscious mind so that the unconscious might better take the wheel. One could also point to Wah’s own long engagement with similar strands of “social intimacy,” something far more overt and radical in Wah’s work than, say, the work of George Bowering. fitzpatrick speaks of articulating a social engagement of space, attuned to the responsibilities of community, and the class distinctions that offer different opportunies and alternate perspectives, including critiquing the way both prairie poetry and coastal poetics have engaged with some of those same spaces, such as the poem “THERE’S A LIMIT TO YOUR LOVE,” that includes:

Only weather’s
much different

when Christina
Sharpe writes it.

The relational sway
of antiblackness

catching in
the chinook

through those
Beltline streets

where getting lost
can break

because he’s
not being policed.

And perhaps that is the distraction that fitzpatrick speaks of, during his 2015 Touch the Donkey interview (fitpatrick has also worked on the Fred Wah Digital Archive, for example, which would suggest a deeper awareness of Wah’s ongoing work), faking left but veering right, or even straight on ahead. The outer shape of Bowering’s framing might have offered him the prompt, but what resides within is entirely different, structured around and through an alternate set of concerns, cadences and complications. As fitzpatrick spoke of his evolving shifts in writing and attention in that earlier interview:

I’ve gotten relationally messier and formally cleaner. I’ve moved to longer forms with more iteration that attempt to retain an unpredictability. I’ve ached to find ways to cut to the chase politically while also smuggling that politics into a seemingly tame package. I’ve moved to uglier content. I’ve gotten more laughs by being more sincere. I’ve tried to undercut expectations through long form set-ups and disruptions. And mostly, I’ve increasingly tried to give myself the time and space to work out increasingly complex sets of ideas that emerge from simple problems and hunches.