all ribs all tongue
tips + shoulder blades
+ wings made of fascia,
flayed 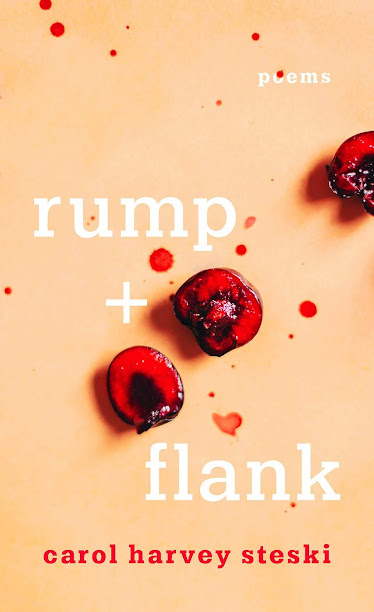 Originally from Winnipeg, Toronto poet Carol Harvey Steski’s full-length debut is rump+ flank (Edmonton AB: NeWest Press, 2021), a collection of short narrative poems arranged into three titled sections—“VARIOUS CUTS,” “TYPEFACING” and “SCAR”—that write on and around the physical body. This is a collection of poems composed as short takes, offering examinations on a variety of bodies, from human to animal, plant to microbe, capturing less a matter of how we got here and where we might be headed than an acknowledgment that we are purely, clearly here, and what that, in itself, allows or provides. “Imagine candles lit inside / singeing the meat,” she writes, to end the poem “pumpkin farm,” “the way the thought of hot sex // burns you up / sometimes.” She writes to understand this moment, right here, through poems set as narrative theses, from opening argument to inevitable conclusion, and all she might learn through the process. “Haunted by chronic loss,” she writes, to end the poem “shark teeth,” “they harbour the common knowledge of neurotics: / that eventually all our lovers run away. / Even our own body parts / abandon ship on the regular.”

The poems in Steski’s rump + flank are composed as a sketchbook form of narrative note-taking. A poet of sentences, each of her poems are built in an accumulation of short, halting phrases and line-breaks; a poet of short scenes and narrative theses. “The lake this year is choked with tadpoles,” she writes, to open the cleverly-titled “tweenage wasteland,” “everything cycling back. / Pollywogs, those prepubescent frogs, / someday they’ll grunt nervously / at dance parties, but for now / these half-legged, half-flippered / amphibian wannabes / are reminders of impotent youth, / precursor to full-blown / angst.” There are moments during which some her stories hold back, providing less storytelling than scene-setting, albeit some scenes set without much else provided beyond that initial sketch. Otherwise, her narratives unfold and unfurl, work to slowly reveal the distance she works toward from each poem’s opening. “I need the slow reveal,” she writes, as part of the poem “resurrection,” “a cascading flush – / like when you finally understood / what all your secret parts were made for – / that deepens into a soft buckling of knees.”