If you could merge the passion and seeking across borders of thought and poiesis in the American work of C.D. Wright, Cid Corman, and Gary Snyder, you’d have one possible avatar in English for Galician poet Uxío Novoneyra (1930 Parada do Courel – 1999 Santiago de Compostela), for theirs too is a work of the land. If you savoured the multudinous dawn voice of UK-Norwegian-French poet Caroline Bergvall with the Shetland accents of Jen Hadfield and the attentionality to lexicon of Scottish poet Kathleen Jamie, you’d have another avatar for Uxío Novoneyra. There are echoes of Yannis Ritsos in English translation, too: a precision with things observed, an understanding of their simplicity faced with that of a human being, and a respect for those who work and endure with the land.

So much poetry in English, that meets and greets us and creates its tumult and accent between us, also creates a space in us that is an avatar for this incredible poet, virtually unknown in the English-speaking world but a towering presence, even twenty years after his death, in Galicia in the northwest of the State of Spain. Novoneyra’s a poet whose attention to his own culture and its influences on language and rhythm matches that which we receive in the works of the great Andalusian poet Federico Garcia Lorca.

The latest project translated by Montreal poet, editor, translator and critic Erín Moure is Uxío Novoneyra’s The Uplands: Book of the Courel and other poems, a bilingual edition with Moure’s English translation alongside Novoneyra’s original Galician “with an Erín Moure poem from Little Theatres, a dictionary, an essay, an introduction, and dreams” (El Paso TX: Veliz Books, 2020). As the back cover offers on the work and life of the late Galician poet Uxí oNovoneyra (1930-1999): “He was an eco-poet before the concept existed. Maybe he even invented it. He wrote and rewrote one great book all his life, Os Eidos [The Uplands], from which most of these poems are drawn.” Citing the author’s long period of respiratory illness, Antón Lopo opens his foreword, “Wolf of the Uplands,” writing: “In all of Uxío Novoneyra’s extraordinary life, the years between 1952 and 1961 were probably the most enigmatic and intense.” Further on, Lopo offers:

After a few months in the Courel, the buds of The Uplands started to open in the Courelian chestnut woods amid the noises and silences perceived by Novoneyra from his bed, or from the wide hall of his house, which he’d reach exhausted; it was the only walk that he could manage with his damaged lungs. After a while, his ear began to perceive, in the Galician language of his parents, and in his own timbres, a whole inheritance of lived experience. He revised his Madrid poems to fit into the new structure he was evolving, and reworked more recent compositions, refining them, listening to them, and returning to refine them again.
The project was complex, relentless, and unforgiving. Complex because the songlike verses of the pamphlet Snowflakes, published by Follas Novas and edited by Girgado and Cochón, had given way to poems composed in a more hushed music, existentialist in their rhythms, which surely would never have existed without the Heidegger absorbed from Piñeiro and, above all, without the contemplative abyss Novoneyra had entered as a result of being ill. “The wolves of pain have gone now. in their midst, I really felt what longing is,” he wrote to Manuel María in November of 1953.

Novoneyra’s poetic is a lyric exposition attentive to the land and its realities, writing of snow and smoke and wind. His writing has echoes of the forceful “YAWP” of Walt Whitman, composing and performing playful scraps of fracture, fragment and ellipses. Novoneyra’s work is composed and comprised of short lyric bursts that accumulate nearly into a “poem as long as a life,” as bpNichol might have determined it. As well, Moure occasionally offers more than one, it would seem, translation of a particular short fragment, allowing multiple possibilities of the shifts between the two languages to emerge. There is such energy that pushes through across his lyric exhaltations and descriptions, one that sets as its foundation the people of his immediate region, and of his home: “Unlike the lineage of kings / scattered in manors and palaces, pazos and alcázars / across Europe and Africa / Instead, the lineages of peasant labourers / generations and generations / gathered at the door of shut houses / on the staircase of stone / or in the rootspread of a tree like this. // Lineages of the glebe / appeaing from the dead and even the July sun’s unstartled / when they rose up to scythe in the dew!” Part of a further volume, possibly, might be a study exploring the shifts between the earlier versions of Novoneyra’s text, and the multiple versions that emerged across the years he worked and reworked it.

Wind HUMS and shimmers through high heather.
Sun winks and rises in the fog.
Through the mountains fall and rise
long shadows jagged and black…

The fogs glide above the fens
and on the mountain there’s patches of sun.

Leaning over the weir
I’m transfixed in it.

The fogs glide under the water. 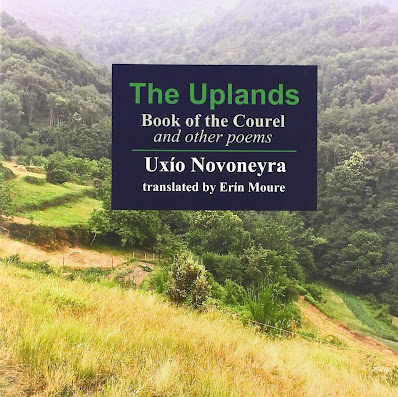 It has been interested to watch Erín Moure’s ongoing explorations through translation over the past two decades-plus, and it would appear that for Moure, translation isn’t purely a singular project or trajectory, but an extension and continuation of conversations that run throughout her work as a whole. One could point to the use of multiple languages and stitched-in materials throughout her own poetry collection to her early book-length translations of poetry from French into English (Nicole Brossard, for example), before eventually extending further, to engage with Portuguese and  Spanish, and Galician texts, beginning with the work of poet Chus Pato. Moure has long been attentive to both translation and what she calls transelation, attending to shifts not simply between and amid language but the possibilities themselves, of which there are so often more than a simple, single one. Her overlay across and into the work of Pessoa, Sheep's Vigil by a Fervent Person (Toronto ON: Anansi, 2001), was a particular high point in her evolution as and through translation, and the ways through which she seems to approach the work of Uxío Novoneyra furthers the possibilities of what might be possible. Her notion of translation appears to be one of polyphonic conversation, writing out not but a singular definitive thread or perspective. It is her openness that allow for multiple elements in the original text, interacting with her own approaches and considerations, their equal weight.
Posted by rob mclennan at 8:31 AM
Labels: Antón Lopo, Erin Moure, Uxío Novoneyra, Veliz Books