Travel back. Because of a misstep, I saw a crevice in a home’s knee in place of brigands. Play of light and color off their helms. Reading in the original French. Reading to be elsewhere. I look past it, first conception.

I read Proust. In wide-sleeved houppelande, she incarnates. Swollen fruit of her manly form a solid allusion. Prod that membrane edged with ribbons of watercress or cuckoo flower.

For each word, a word in another language means part of the same thing. When I look up “midwife” on the university website, the only reference is to Plato. Theaetetus, he suggests, is in discomfort because he is in intellectual labour. Socratic Method, maieutics without a uterus, the skill of drawing thought from a latent mind.

I too want to be a scholar. I want a new vernacular of milk.

Echo, echo, on my perch with my library. Well-stocked dictionary sends me Latin, lygeum spartum cultivated or not present here. 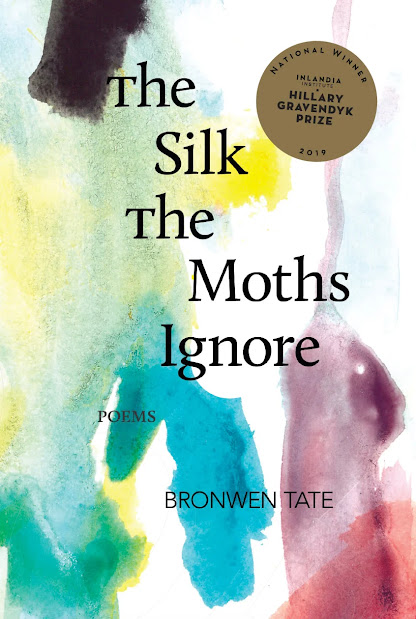 I’m very pleased to see the newly-released full-length debut by Bronwen Tate, an American poet recently transplanted into Vancouver for the sake of a teaching gig at the University of British Columbia. After the publication of a handful of chapbooks over the past few years, including titles published by above/ground press, Dusie Press and Cannibal Books, comes the full-length The Silk The Moths Ignore (Riverside CA: Inlandia Books, 2021), winner of the 2019 Hillary Gravendyk Prize. Through her book-length suite, Tate speaks of children, echoes, stories; writing from the inside of a curiously-paired bubble of text and pregnancy, each of her narrative threads swirling up and around the other. “Any creature with the head of a man will face you differently. Bind the book of autumn,” she writes, to end the poem “NEWS KNOWN / SOONER ABROAD,” “ember-leafed difficulty. Pea coat in the closed, embarrassed, left diffidently. // Can a heartbeat quicken? Mismeasured, I bargained, unmeasured, immeasurable. // Any foreign city can be a mellifluous note. // The true sky was grey.” There is such an interesting and intense interiority to these poems, writing through the blended swirl surrounding pregnancy and mothering a toddler, and reading and thinking. Through Tate, the considerations of writing, thinking and pregnancy are singular, shaping lyric sentences that are attuned to the shifts within her own body. “I could not say I had a daughter. I had a syndrome,” she writes, as part of “THE BEAUTY OF BEINGS UNLIKE / THAT OF OBJECTS,” “missing chromosomes nature mostly culls. A colleague tells me she studies what for me was a sentence. // I had that, I answer. Lost it. Her.” And yet, these poems were not prompted by such shifts, but through an entirely different kind of shifting perspective, as she offers as part of her “ACKNOWLEDGMENTS”:

Many of these poems began with reading Proust in French, which I read well but not perfectly, in search of words I did not know and could not make a confident guess at. I used these words, my guesses based on context, strange collisions, their etymology, French dictionary references (sometimes only to the Proustian sentence in which I’d encountered them), and the guts of my beloved OED for drafting material. While much of what this process generated has been trimmed away in revisions, I’ve gratefully retained some plants, some syntax, some atmosphere, and many titles.

I am fascinated through the way she shapes her poems, whether prose poems or her prose-attuned lyrics, attentive to the shape of the sentence and the accumulation of phrases, and the deep music of her flows and shifts and pauses, breaks. “Now bathysphere,” she writes, as part of “SWEET TEA,” “I house a slow advance. Brain and bone.” Or, as she writes to open the prose poem “AN EMPTY MEASURE IN MUSIC”: “That the dead could linger. Measure to the first knuckle of my littlest finger. Hand-worked guipure, light wool for a shawl. My body a shroud, lost all, lost all. Flicker, spark, and softest fall. // I count the beats in stillness.” Through Tate, we experience a lyric where language and the body intersect, and meet; a confluence of words and cells, each offering their own set of simultaneous possibility. She presents both an abstract and deeply physical and straightforward narrative space, one that articulates how perspective adapts, shifts, stretches and reshapes, from the immediate of the body to what that represents, moving through and against the language of Proust, and such a generous and affirming song of being.

Blue umbilical pulse to cut, my last placenta
Stuck, the doctor scrubbed elbow-deep, that flesh
Suddenly neither of us, excess, would rot inside me.
I held him, purple still and scrawny, bawling.
Hot blankets, shivering, sweat-wracked, hormone high—
What is in the body, yours, mind, all mouth? We are
Our parts, not a self apart, grow new ancillaries, collaborate
On blood. My son nears three now, swipes and taps
Glass-faced watch-hands, asks if the umbilicus plugs
Into the wall. Charged up on Coca-Cola, wails, “hard peaches
Are my favorite.” He wants what’s unripe. I slice and macerate
With sweet and salt and mint, tired now beyond cheek’s fuzz
And bloom. New one, I made you a room inside my mind.
Still you’ll split my skin to quit me.