It begins millions of years ago with algal mats at bryophytes.
Late, when the water recedes, the earth is stitched with
gymnosperms, angiosperms, grass fills the open expanse.

It begins the way all beginnings do. Everything is new, unknown,
cellular. The sun spills its full splendor across the landscape.

It begins with her opening, almost imperceptibly, toward the light. (“Accretion”) 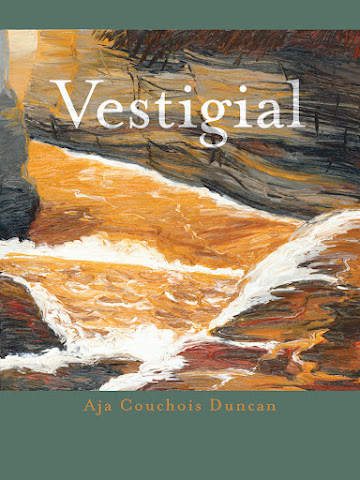 I am very pleased to see Bay Area poet and librettist Aja Couchois Duncan’s second collection, Vestigial (Brooklyn NY: Litmus Press, 2021), following on the heels of her Restless Continent (Litmus Press, 2016) [see my review of such here]. Set in five sections—“Accretion,” “Multicellular,” “Divergence,” “Vestigial” and “Trilling”—the book-length lyric suite writes out evolution as a love story, writing a pair of bodies and their evolution, into being. “She is disoriented by the changes. Some days,” she writes, as part of the second section, “the language of it / escapes her and she finds herself flying too close to the window, / blindly smashing her wings against the glass.” Composed as self-contained untitled prose poems gathered into story-groupings, she writes a story that dips in and through both music and story, writing a suite that almost leans into a ballad, through the structure of the extended prose poem. “If only the body could be read as geology,” she writes, “as time and accretion. / But it is a temporary architecture.”

Hers is an ear very much attuned to the music of what she is attending, one that is reminiscent of the examinations through science and scientific language of Canadian poet Christopher Dewdney (I’m thinking specifically of his four-volume “A Natural History of Southwestern Ontario”), although writing out a more musical lyric, as though Dewdney were composed through the lens and lyric of Vancouver poet Daphne Marlatt, or even Toronto poet Margaret Christakos. “Darwin found such things a problem. The difficult to explain, / to describe. Suddenly flowers appeared in the fossil record. It’s / an abominable mystery, Darwin said. Only ater would it be possible / to trace the evolution of the angiosperm from gymnosperms to seed ferns, the extinct link, and narrate the passage from front to flower.” As Duncan writes to open the second section, “Multicellular”:

Before everything came into being, there was a great deal of waiting for. Waiting for the earth to form, waiting for life to appear.

She waits on her wadikwan, its fragile perch, for him to find her. It takes millennia. When he arrives, he is coated in her murky scent, his body dusted with the damp molecules.

Listen, he says. In the silence she hears the universe.

Four billion years ago, in a galaxy that was not yet named, earth was formed. Explosive and molten, the planet took another billion years to tilt and cool. Eventually it formed a solid crust, cupping water at its surface.

The first life was single cell and microscopic. When the cells recognized themselves in one another, they attached, and in their connection created multicellular species. But such cellular coupling complicates reproduction. Multicellular life requires a germ cell, an egg or sperm, to combine its genetic material. To reproduce.

In her 2019 interview for Touch the Donkey, she spoke of her work-in-progress, which was a sequel to her then-unpublished manuscript of Vestigial, adding how

Both are exploring intimacy between people and intimacy with Aki, earth, and her inhabitants. I’ve been presencing the earth as a central voice in my work for some time as I hear her talking to me, to us, to all of us.

A: That is such an interesting question. I am deeply connected to the earth, I am part of the earth. We all are. But many people are seriously disconnected from their understanding of our collective sentience, the rhythms of river, rock, sky. The question that troubles me is what will it take for others to restore this connection and how might my writing be part of what brings them back. I don’t write explicitly for this awakening, but I am always writing toward it.

My writing practice has evolved greatly over time, but the “natural world” has always held both subject and object positions so that the particularities of the English language does not define what is living and what is not. There are actually very few inanimate things in this world. And yet this language that we are bridging one another through (English) reinforces a world view that sentience is limited to a very small number of beings on earth.