You fuck me with your entire hand in a room full of the dead. The dead are inside boxes behind glass. You fuck me so we can feel for one second that our friends are not dead. That they are living inside of us. A security guard approaches & you stop. I pull you up from the floor by the lapels of your leather jacket. Face covered in cum. I exhale & absorb our dead friends into my body like you opened up a gateway for their arrival. I absorb them into my body & hope they will stay. & that they are happy & dry & warm. I give up the possibility of sleep for myself in an effort to make an environment for my dead friends. A social space. A closed world.

The latest from “trans, arab-american punk poet-performer cyborg” Andrea Abi-Karam, author of EXTRATRANSMISSION (2019) and co-editor of We Want It All:An Anthology of Radical Trans Poetics (Nightboat Books, 2020) [see my review of such here] is Villainy (New York NY: Nightboat Books, 2021), a collage exposition of angry shorts, radical speech, lyric sketches, incantatory and inflammatory prose and direct calls-to-action, even if only for us to love each other enough to care about what occurs. “HOW DO WE MAINTAIN THEM AGAINST ALL POSSIBLE / VIOLENCES,” they write, as part of “WHAT IS CLOSED/ WHAT IS CONTAINED.” “HOW DO WE STAY W/HOLE [.]” Composed as a response to violence, specifically anti-Muslim and anti-queer, Villainy is a suite that responds directly to grief, composed as eight extended poems and opening salvo. The poems are stark and abstract, filled with swagger and verve, and an anguish too big to quantify. As they write to open their acknowledgments:

I wrote the heart of Villainy in 2016 & 2017 during the most intense period of grief I’ve ever experienced: the wake of the 2016 Ghost Ship Fire in which 36 beloved community members were killed at a DIY show in Oakland, CA & the 2017 Muslim Ban that blocked refugee, foreign national, & immigrant entry into the US, particularly targeting majority Muslim nations. This book was an anchor & an outlet inside of a loss that I did not know a way through. Every day my thoughts are with those lost by & living with these violences. 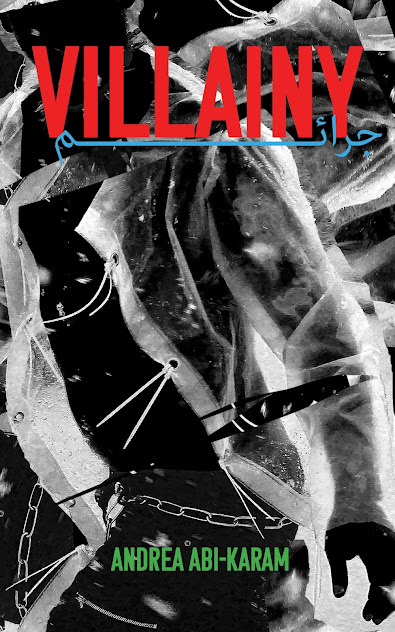 Abi-Karam’s eight poems that make up Villainy each articulate space and rhythm in very different ways, from the stretches of exclamation set all in caps to the bursts of narrative prose to the accumulation of short phrases, each structure seeks to articulate through different means, to slightly different purpose. Abi-Karam is attentive both to physical space on the page and to breath, writing out passages as through a bullhorn to writing out erosion and the possibilities of rebuilding, to attempting to respond to such inarticulate loss. Villainy is openly and honestly passionate and heartbreaking, deeply personal and savagely political, attempting to articulate shape and purpose out of an enormous grief and loss, as Abi-Karam is somehow able to articulate an incredibly powerful response to what might, at first, appear a rage and a grief too large to be possible to write through or around at all, let alone so well. As part of the third poem-section, “AN UNBECOMING,” they write: