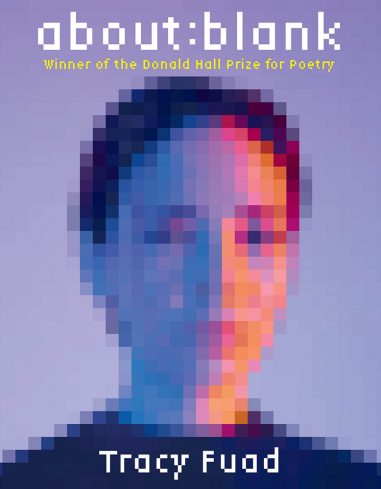 Selected by Claudia Rankine as winner of the Donald Hall Prize for Poetry is Berlin-based American poet Tracy Fuad’s full-length poetry debut, about:blank (Pittsburgh PA: University of Pittsburgh Press, 2021), a collection of lyric collisions, fragments and fractures through language, the internet and Kurdish ruin. The granddaughter of a Kurdish immigrant to the United States, Fuad composed much of the collection during two years spent teaching English in Kurdistan, as she responds as part of a July 2021 interview conducted by Helena de Groot for the podcast Poetry Off the Shelf: “I was aware that I was Kurdish from a young age, but there was no one really to talk to that about. Because I do think I really, in a way that was quite intended, was raised as a white American. You know, my parents were quite intentional about giving me and both of my brothers very American names because they knew we already had a foreign last name. So, I think a lot of my story is a story of my father’s assimilation and then the next generation sort of uncovering that history. And finding out your relationship to it.”

There is an openness and a curiosity, as well as an expansiveness, to the text of about:blank, one composed through a combination of self-contained poems against fragments, sketches and short lists, all of which interplay into the larger scope of this intricately-shaped book-length interplay between language and culture, ancient sites and technology. From the core of seeking her own relationship to her family’s history, Fuad writes an excavation of cultural and personal spaces and historic landscapes through short sketches and longer examinations. “Applied to a job in Kurdistan,” she writes, as part of “Considering the Unit of the Day,” “Considered whether I wanted the job or wanted to want it / Considered the difference between these; its shape, dimension, texture / Searched for images of reverse sandwiches throughout duration of this consideration [.]” In many ways, this is a collection shaped around conversation, whether between ideas, cultures or languages, writing of the seemingly-contradictory reality of locals with smartphones roaming ancient hillsides. She writes of placement and ruin, and the long shadow of history, as the poem “Report of the Excavation at Tell Sitak” offers: “The ruins here were further ruined by recent war and roots of oak, / but still, beneath remains of modern bombs, the dig reveals a fortress built by the Assyrians: / defensive walls of stone and three stone towers; / a courtyard floor incised with flowers; / baked bricks, a kiln, and iron slags; / in a threshold, three jars of living earth, each large enough to hold a child; / a fragment of a tablet pressed with wedges, / a record of the sale of seven people and a field. / Even then, this land was bought and sold.”

about:blank is an extremely smart book, and Fuad’s curiosity is as engaging as it is engaged, all the more impressive when one considers this her full-length debut. As part of one of a cluster of poems, each of which are titled “Object,” she writes: “you know that labor always means / a compromise and art is always thieving / for the folding of one’s authentic thinking [.]” Further in the same podcast interview, she responds:

Tracy Fuad: Well, I mean, I think it’s impossible not to romanticize Kurdistan, because this is the cradle of civilization. And there are people in Kurdistan still living the way the earliest humans lived, or, of course, you know, not so different, but with smartphones.

Tracy Fuad: But still tending sheep, and a semi-nomadic life, moving up to the mountains in the summer for the sheep to graze. And this is where sheep were domesticated more or less, and where crops were domesticated, more or less. So there is really this sense of being in contact with the ancient. And I was living in a town called Ranya, which is about two hours north of Sulaymaniyah, not so far from the Iraq–Iran border. So it’s right in the foothills of the Zagros Mountains. And there are many, many archeological sites there. So there is a plane and then there will be mounds of dirt. And these mounds of dirt are what’s left of very ancient 3000-, 4000-, 5000-year-old civilizations. You know, it’s just in the dirt, someone pulls out this piece of glass, and it’s a 5000-year-old bracelet.

Tracy Fuad: And so you can’t help but feeling in contact with something very ancient. And Kurds themselves, although most of them don’t live in villages anymore, the romanticized village life is very deeply a part of Kurdish identity. So, I’m so drawn to that. And then at the same time, you know, you might still want something that you can’t find there, and, “How can I get this?” So you’re always already embedded in this society that you’ve been born into, even if you’re yearning for or longing for a past that never really existed, that’s always, you know, being constructed by us to fit our imagined nation’s needs.