A Poetics of the Press: Interview with Poets, Printers, & Publishers, ed. Kyle Schlesinger

A Poetics of the Press is a collection of sixteen interviews conducted with publishers from the US, England, Germany, and Australia spanning four generations. These publishers are also poets and letterpress printers with a unique relationship to language as a visual and material form of art.
Like many books, A Poetics of the Press did not begin as a book, but as a series of insatiable questions I wanted to ask of poets, publishers, and printers about the art of the book and their personal approaches to publishing. In 2008, I had the opportunity to conduct the first interview in this book with Steven Clay, the only publisher in this book who is not a poet or printer, at the Research Group for Artist Publishers’ (RGAP) annual Small Publishers’ Fair in London. At that time, I was researching the relationship between poetry, typography, and visual art in books printed by hand in America between the end of the Second World War and the end of the Vietnam War. At that time I realized that there was a dearth of publications on the subject, and that Clay’s Granary Books had published much of the literature I found most compelling, so I asked him if we could record an interview around that subject. I learned so much about Granary’s history and Clay’s philosophy of publishing I pursued more interviews to explore a wider field that would take me closer to the present. (“Introduction,” by Kyle Schlesinger) 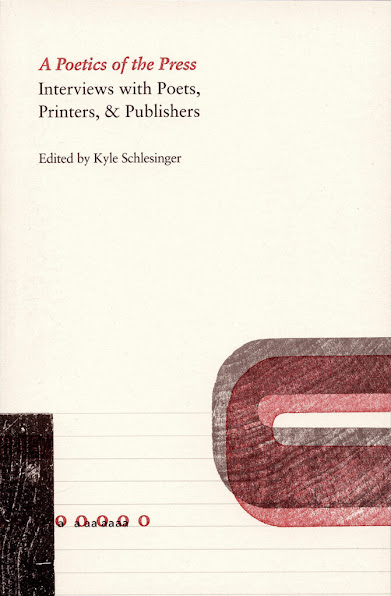 I am deeply impressed by the work involved to put together the new volume A Poetics of the Press: Interview with Poets, Printers, & Publishers (Brooklyn NY: Ugly Duckling Presse/Cuneiform Press, 2021), “Edited, compiled and introduced by Kyle Schlesinger.” Arranged “chronologically by the date of the publisher’s first publication, rather than by the order in which they were conducted to give readers a sense of the arc and evolution of poetry, art, typography, and technology in book form,” Schlesinger conducted sixteen interviews across more than a decade: Keith and Rosmarie Waldrop (Burning Deck Press), Tom Raworth (Matrix Press and Goliard Press), Lyn Hejinian (Tuumba Press), Alan Loney (Electio Editions), Mary Laird (Quelquefois Press and The Perishable Press Limited), Jonathan Greene (Gnomon Press), Alastair Johnston (Poltroon Press), Johanna Drucker (Druckwerk), Philip Gallo (The Hermetic Press), Steven Clay (Granary Books), Charles Alexander (Chax Press), Annabel Lee (Vehicle Editions), Inge Bruggeman (INK-A! Press), Anna Moschovakis and Matvei Yankelevich (Ugly Duckling Presse), Aaron Cohick (NewLights Press) and Scott Pierce (Effing Press). Gathered as a single unit across English-language literary publishing (focused on American writing), these interviews provide a fascinating overview of a particular strain of literary publishing. Focusing as it does on poet-run letterpress activity, Schlesinger’s extensive work offer contexts for a wide array of writing, writers, publishing and other associated literary activities, from publications that emerged from higher-end commercial printing to the rough craft of those learning on the fly (and occasionally both, simultaneously) and everything in-between. As the opening of his interview with Lyn Hejinian around her Tuumba Press (1976-1984) reads:

KS: When I was a kid growing up in Providence, all of the used book stores had Burning Deck books. I joke with Keith and Rosmarie Waldrop that Burning Deck was my first “curriculum” because I didn’t really know how to begin navigating the world of contemporary poetry. I didn’t know what letterpress was when I bought a gorgeous book by Rae Armantrout that was completely unlike anything I had ever read before. I latched on, and from then on out I would read anything with a Burning Deck pressmark because I had trust in Keith and Rosmarie’s editing. How did you conceive of your role as a publisher when you established Tuumba?

LH: I thought I should start printing books with a work of my own; that way if I ruined it I wouldn’t have the embarrassment of going to someone I respected to say, “I destroyed your work, it’s a horror!” I was living north of the Bay Area, outside of San Francisco, and was depending largely on print to get news of what was going on. Sparrow, from John Martin’s Black Sparrow Press, was produced largely as promo for forthcoming books or for books that he had already published that needed a little boost. I loved the format, and even thought it was a publicity piece, it had a sense of a newsgram, a sense of immediacy, and it was beautifully produced but unashamed of its staples. So there was something un-precious about the production values. The other press that interested me aesthetically, both in terms of book arts—although I don’t think I had that term in my lexicon at that time—and in terms of the poetry was Burning Deck. The Waldrops have inspired untold numbers of people who publish books. So I liked that sort of breaking-news quality of the chapbook; I liked the size, and I thought it was something I could do because it wasn’t technically overwhelming. I understood how to staple things, but I didn’t understand how to perfect-bind, etc. So I decided to start Tuumba.

I began with what I now consider a completely erroneous misconception, which was that you introduce new writing, or new writers, by piggybacking them on the reputation and work of better-established figures. I learned that you don’t need those better-established figures because when enough new writing is collected, it speaks for itself and suddenly announces something’s happening. You don’t need credibility—borrowed credibility—to make that happen. So the first series is a bit eclectic, and then I sort of figured out what I was doing. By the time the second series began, I had been in touch with the writers whose chapbooks would later be published by Tuumba, and, likewise, these were the writers who were publishing works of mine—largely the group known as Language poets.

Reading this book from a Canadian perspective, of course, the stories and lineages presented throughout are absolutely fascinating, although I immediately start wondering at how much Canadian activity might have potentially fit into his criteria, whether Jason Dewinetz at Greenboathouse, Mona Fertig at (m)other tongue press, or Crispen and Jan Elsted at Barbarian Press. One could mention Andrew Steeves at Gaspereau Press, as well; Steeves might have started out writing poems, he seems to have moved away from such. The same could be said for Tim Inkster of The Porcupine’s Quill, Inc., as he was producing his own writing and publishing across his early days as a printer and publisher, but doesn’t seem to have done much in the way of that since. I don’t know if, also, or anything of the origins of Dreadnaught, or the details on some of those early Coach House Press publications. It is probably a matter of simply how thoughtful and thorough Schlesinger’s project is, that it can’t help but spark ideas on what further projects might be possible.

This really is a fascinating volume, in part for the range of conversation that so many interviews around letterpress poet-run literary publishing provide, from aspects of community and communal labour to the intricacies of financing a literary project and the nuts and bolts of fine printing to an array of names of other writers and presses within each press’ circle. As Scott Pierce speaks to his time running Effing Press in Austin, he provides a fascinating list of other writers and activities, offering a context to his own activities that I wouldn’t have been aware of, say, from such a geographical distance:

Eventually I just turned my attention to the few poets I really loved, mainly my best friends: Dale Smith and Hoa Nguyen. Later, poets like Farid Matuk and Susan Briante came, as well as Friedrich Kerksieck, Micah Robbins, and David Hadbawnik. Farid came in 2005 and I think that’s when I met him. He had been here, but he wasn’t really here. I mean, he was there at the Michener Center. I remember meeting him and thinking, “Who is this cocky bastard? What kind of poetry is this?” And then he started hanging out. If you want to talk about somebody who just really picked up the street, like that poetry is a living thing in your mouth. It’s not like a thing you wall yourself away and research, and then think hard about and write. He really picked up that poetry was a living thing, and that was an amazing thing. Micah I didn’t know too well. He was down in San Marcos. But he started his press, Interbirth, early. David Hadbawnik came here kinda late from San Francisco. I was already aware of his work at Habenicht Press in San Francisco having published people. I had read at his series before. It just kept getting better and better. There still weren’t a lot of books being made here. Dos Press was here, too. Chris Martin and Julia Drescher ran that but they were never really in Austin. Maybe they were. They were more in San Marcos, and in between here and Austin. But there were people doing some really neat stuff.