Help! We have been lassoed into a J.J. Cale song & cannot find our way out. No matter how many cattle we push, creeks we cross. Every morning, we wake up like the snow on the mountain. Which is to say, under a bright trance. Somehow steady. Like your hand or the moon. Our hearts go moo. This part of the trail—you can call it fate or a preposition. The cruel square dance, a corner a season. Rope. It’s where we’re always at. 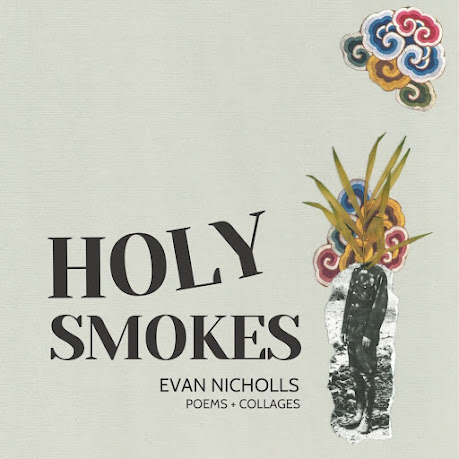 Virginia poet and artist Evan Nicholls’ debut is Holy Smokes: Poems + Collages (Syracuse NY/Exeter NH: Ghost City Press, 2021), a collection of prose poems and full-colour collage. Given this title is softbound (not stapled) and some sixty pages, I’m uncertain how this is referred to as a “chapbook”; I would certainly call this a full-length collection. The poems sit in two sections on either side of a middle section, comprised entirely of full-colour collage works, and the counterpoint of collage prose poem to collage visual adds a curious element to the reading of both, suggesting the echoed nature of composition for both his visual and written forms. The bulk of the poems collected here are set as single-stanza prose poems, although he does also include the occasional poem with more traditional line-breaks, including points where he uses the line breaks as a way to almost disrupt the line, disrupting the cadence and the meaning. “Contrary to what the newsreels say I feel,” he writes, to open the first poem of the collection, “Wildfire,” “cold on the inside I came West to plunge / my body into the Pacific They call me Death / Tell Rising This is not my first name My real / name was whispered to me by a paper-dry / leaf hopping & dragging like a flightless bird [.]” Otherwise, this is a collection of odd little narratives and short bursts, composed via an accumulation of sentences and phrases into folksy and surreal lyric narratives comparable to the prose bursts of writers such as Benjamin Niespodziany, Stuart Ross or Gary Barwin; set in that space between what might be considered flash fiction and prose poem, existing somewhere purely between.

There is a particular self-amused joyousness to these pieces, a confident curiosity that runs through his collection of short narratives. His poems offer a curious humour, such as “Hell Rejects Hannibal Barca (& Rules It a Suicide),” composed as a rejection memo from Hell to Hannibal (b. 247 BC), the Carthaginian general and statesman who famously took elephants over the Alps during his war with Italy during the Second Punic War of 218 BC. “We were pleased to consider your application,” the poem begins, “& to speak with you about our opening on The Board, the most exclusive circle of Hell. However, we are unable to offer you a spot at this time.” I am very much looking forward to seeing what Evan Nicholls does next.

Our son was born with a dot above the bridge of his nose. So, naturally, he was a leopard. Our son was a firefighting dog. An i or an ! or the blue planet seen from space. As planned, all this lying worked wonders for his confidence. He grew up knowing he could be anything. He became a good husband and a good father. Our son bought his family a house. Took his kids to the grocery store. We were so proud. Till one day, at the grocery store, the dot became a sniper dot and blew his grey matter across a pallet of tangerines. We knew we had failed him when the president and the check-out girl knocked on our front door, said, You failed that boy.