the plague brings with it
a lack of focus on what
is not the plague. vague

daydreams perhaps, like
a long-marooned sailor
with no real grasp of what

has gone. it slips through
the fingers of memory
without a grain to rub

against the tips. last month
is as distant as childhood
a different way of life 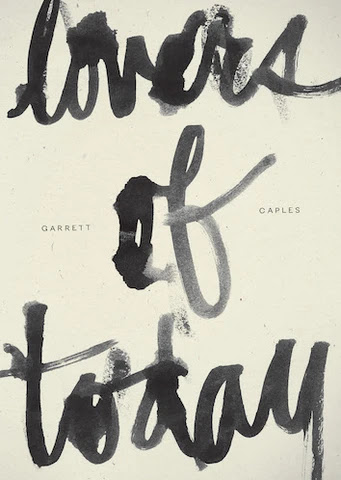 San Francisco poet, writer and editor Garrett Caples’ fourth full-length poetry collection, and the first of his I’ve seen, is Lovers of Today (Seattle WA/New York NY: Wave Books, 2021). Following his poetry collections The Garrett Caples Reader (Angle Press/Black Square Editions, 1999), Complications (Meritage Press, 2007) and Power Ballads (Wave Books, 2016), as well as The Rise & Fall of Johnny Volume (2020), Noches Apátridas: Poesía escogida, 1999-2019 (Unstated Nights: Selected Poems, 1999-2019) (Juan Malasuerte, 2019) and a collection of essays, Retrievals (Wave Books, 2014), his Lovers of Today is an assemblage of short monologues and observations, abstracts and absurdities, some of which hint at composition during the era of Covid-19. “i’m doing / foolish things you do at forty-five,” he writes, as part of “JOHN ASHBERY AND / CLIMATE CHANGE,” “and realize it’s been ten years since // i mentioned my age in a poem. what’s / it mean? over there can you hear?”

His is an odd humour, such as the poem “HARBIN MAXIMS,” that includes: “not everyone / realizes underwater basketweaving // means just the basket, hence / the high mortality rate. it’s / more difficult to play piano than // drive a car but the consequences / of mistakes are vastly less / i realize i’m not made for the // communal kitchen.” Part of the strength of this collection comes from such an appearance of ease, as well as the variety of structural shifts that sweep through the collection, from poems set as blocks of prose to long stretches down the page of clipped lines and phrases, and the multiple structural options between, such as the easy ongoingness of the poem “HUILE ÉTUDE,” that includes “an algorithm / eaten by parasites // in a third world / made from capital // a crop i’m not / due to produce // extinguishes / crude ops // at speed of slight / of hand me ups // nobody does it / better than me [.]” Through a series of first-person narratives, Caples’ poems exist as responses to reading, thinking, friends and conversation; a kind of Frank O’Hara “I did this, I did that” with shades of Robert Creeley and Kevin Killian, allowing both breath-takes and absurdities to float to the surface of the lyric. “the union president’s dead,” he writes, to open “WARM LIFE,” “& they won’t let transgender // people pee in north carolina / & here i’m complaining about // climbing the mountain again / the mountain’ll always remain // if i’m lucky, to keep me from / sucking & only a king mule will // do.” His are the poems that emerge from a poetics of attention, composing short sketched-out pieces as his best thinking form, one that plays with the notion of what may or may not be “true” through his poems. “i am learning many things / in the port of saint-nazaire,” he writes as part of “ÉTAGE ZÉRO.” Further, in the same piece, adding “(the more literal my poems / the less plausible they are) [.]” And then, there’s the opening of his poem “HAIRY SNIFF,” that flows down the page with both a casual ease and a clear deliberateness, offering:

shaved off
my grief
beard

this morn
ing. walk
ed the

plank
of my
line

ing here
in the
here

inafter
words
are so

yes they’
re there
& their

there the
oretically
means the

overage
puts me
over edge