and the memory of drench

It can’t help but feel bittersweet to see American poet Marthe Reed’s [see my obit for her here] posthumous poetry title, deposition | dispossession: Climate Change in the Sundarbans (Berkeley CA: Kelsey Street Press, 2021). deposition | dispossession: Climate Change in the Sundarbans writes on the implications of and erosions prompted by global climate change. Through her book-length poem, Reed focuses her attentions specifically on the Sundarbans, a mangrove stretch across the Bay of Bengal, India, a geography that sits as a particular canary in a coal mine around results of such global catastrophe. “when the stories are forgotten,” she writes at one point, “the river remains [.]” There is an enormous amount of research and other material that holds this collection together, set as a kind of lyric sketchbook of her findings, in a lyric propelled by space and sound and carefully-placed everything, offering a highly-crafted array of narrative flashpoints.

with the tide
relict

a habit of
lunar response 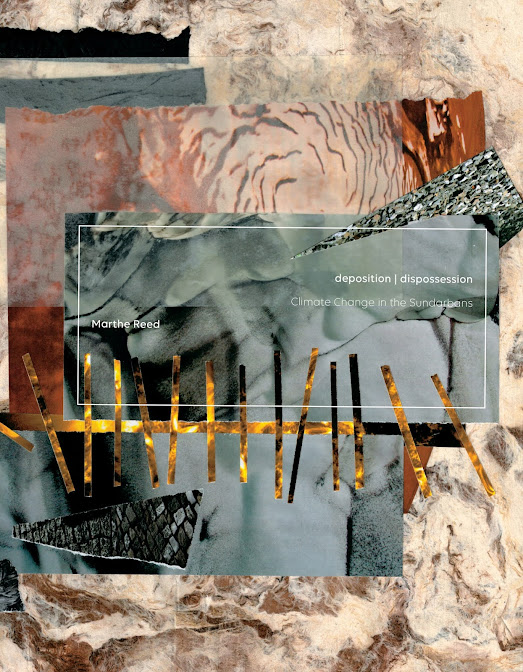 Reed’s ecopoetic is packed with enormous amounts of subtle play and interplay, writing the loss of wildlife and population through a poetics of open space, writing out what remains and what has already vanished. She writes a new map filled with holes. “I do not have a reliable map, only proliferating lists, slips of papers, have the Sun- / darbans lie submerged during monsoon, a green revolution, four of six local salt- / tolerant strains of rice no longer extant, rain-fed paddy agriculture /// nothing escapes the tides [.]” She writes of climate dismissal, specifically during the age of Trump, citing White House Press Secretary statements that paint a dark portrait of what might possibly be inevitable. Produced with an introduction by Angela Hume, Reed’s language on and around climate change is one that breaks and even drifts apart; a language impacted physically due to the flood. As Hume offers:

Reed’s deposition | dispossession grapples with the challenges that climate change poses to the human imagination not through fiction but through poetry, a genre that, [Amitav] Ghost argues, “has long had an intimate relationship with climate events.” One might say that fiction writers and poets alike now face unprecedented conceptual challenges as they attempt to write about the almost unthinkable implications of climate change indicators. But perhaps Ghost is right in suggesting that poetry is well suited to the task, as it is unbeholden to narrative in ways that fiction can be and, moreover, has long been mobilized by poets themselves to convey extreme weather events. Notably, poetry today is wildly various in its trajectories and impacts, not unlike climate change itself, perhaps further contributing to its potential to help humans imagine new environmental realities.
Crucially, Reed’s poetry evades narrative. While many things happen in the book—for example, the flood “eats” and species “adapt”—it does not tell a linear story about climate change. Instead, deposition | dispossession attempts to formally attend to and register the nonlinear, cyclical ebb and flow that has long defined the Sundarbans’ ecology: the deposition, or accumulation, of sediment left in the tide’s path, and also the dispossession, or stripping away, of habitat in the flow and flood. As Myung Mi Kim writes in a poetic essay about her own documentary ecopoetics, “The book emerges through cycles of erosion and accretion. Certainly, this description is applicable to Reed’s documentary ecopoetics as well, deposition | dispossession evokes how the Sundarbans’ ebb and flow has always been and simply is, while also naming climate change’s devastating realities […].