Using this technique, two children can be
separated at birth without any emotions.

So why does the allegory survive while the
soulless creep still walks the streets?

Near the tops of the trees, you could nearly
make out with the ice crystals on the branches.

Some might object to a woman carrying a
mystery child, but we need the freezer space.

So she knew about the safe haven, but would
rather shoot herself right in the stomach.

Generally, we find it beneficial to the state
to allow individuals to disassemble themselves.

When I reach a finality near the ground, will I
lose some of the individual momentum I’ve gained?

Some print outlets might bury ice storms deep
on the weather page choosing a new forecast.

These are striking and radical portraits of shot
leaders defying a Jacobin sense of liberty.

During the past decade, Walmart has begun
to sell do-it-yourself exorcism kits.

Republicanism emerges as a nostalgic quest for
a return to the feudal times of purest liberty.

He was highly ethical in salvaging the tinkering
spirit of the wacky antics of embryonic cells. 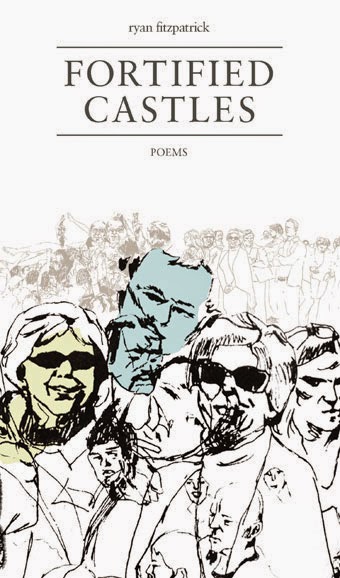 Vancouver poet ryan fitzpatrick’s second trade collection, Fortified Castles (Vancouver BC: Talonbooks, 2014), follows his Fake Math (Montreal QC: Snare Books, 2007) after a space of more than half a decade, and a move from Calgary to Vancouver. After his years involved in the poetics and literary community of Calgary, he’s been immersed in a new community of writers for some time now, and the shift of poetic comes through in this new collection. In Fortified Castles, fitzpatrick’s poetry has evolved into a blend of Calgary’s language-poetics and Vancouver’s social and political engagements, as he writes to open the poem “I Hope to See You Soon”: “I was a scapegoat for the government when all / I wanted was to wish you a safe trip. I greeted / my new friends with a smile. I broke something / here that can be fixed in another neighbourhood.” Through Fortified Castles, fitzpatrick utilizes a kind of collage/cut-up method of accumulation to engage elements of the Occupy Movement, confusion, social interactions, financial anxieties, political uncertainties, ambiguous sentences and an endless series of phrases, consequences and histories, managing to capture an enormous amount of activity in such compact spaces. As he writes to open the poem “Golden Parachutes”: “What is the maximum number of words that can / be spoken by a decapitated head on a pike?” Asked about his new work in an interview forthcoming on the Touch the Donkey blog, fitzpatrick writes:

My second book, Fortified Castles, came directly out of a couple one offs where I began to feed I-statements into Google (“I am so frightened” and “I fell asleep last night” were the first couple, I think), working with the search results. I liked the kind of material that came out so I stuck with it, playing with the shape of the poems themselves as I went. Working into a project from the ground up means that I work from a series of compositional problems or questions – questions that don’t emerge without the experimentation at the centre of doing something that doesn’t fit in a bigger project.

Structurally, its curious how fitzpatrick has composed two sections of poems composed in couplet form that bookend a lengthy section of poems structured in the form of sonnets, adding another layer of structural complication to a compositional process of stitching together Google search results. Part of what makes fitzpatrick’s poems so compelling is in the collage affect of his lines, forcing the full attention of the casual listener, and allowing the careful reader to experience multiple threads heading off in a variety of directions. As he writes to open the poem “I Want To Break Things”: “A closed door is music to me. My apartment is / in my name. I tense my face against the screen. / My backyard is my sanctuary. My dentist sends / me postcard reminders. I built this fence myself.” Given some of the subject matter the book explores, keeping the reader slightly off-balance might be entirely the point. Given some of the subject matter, it would seem strange to attempt to craft poems that didn’t unsettle. Perhaps we should be far more unsettled than we are.

I FAINT WHEN SURPRISED

The city is large and confusing and is the only
judge I have to answer to. The problem is with
my headphones and their immoral, bleached-out
hucksterism. I overnight hype on the spill I took.

Have you read the YouTube comments? I hit my
head on the upper bunk and my muscles lock up.
It’s weird and sucks that I robbed you. I push
and pull at the hinges of the improvised door.

I wake to fading stars across my jaw. A question
mark follows my email subject line. It’s human
rights for everyone and there’s no difference. I mean
he wasn’t playing around. I crossed a threshold.