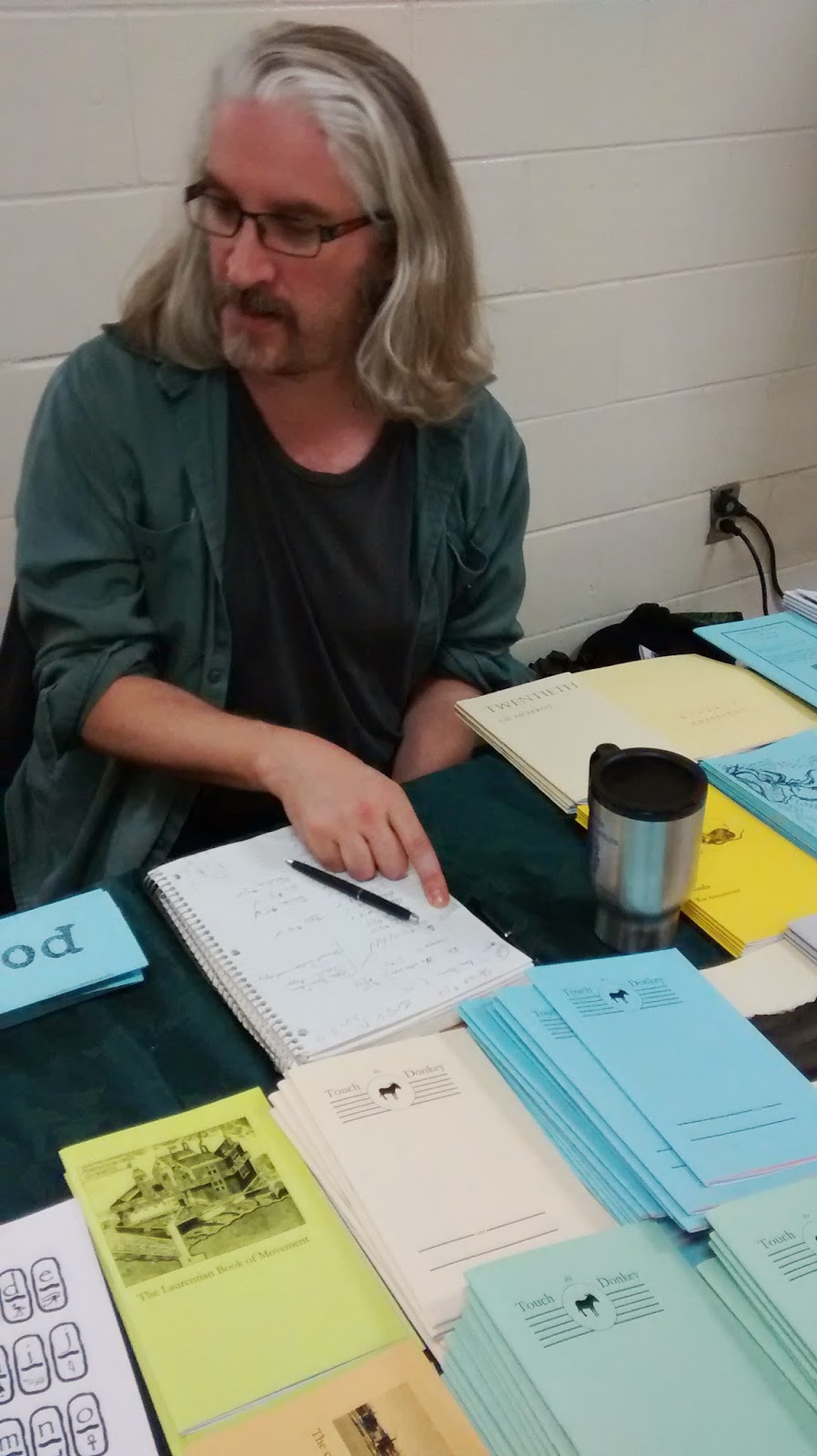 We recently celebrated the twentieth anniversary of the ottawa small press bookfair, managing yet another successful day of vendors-to-capacity! November also (exhaustingly) included my own participation in Canzine and Meet the Presses’2014 Indie Market (among other events), and I’m hoping to be able to post a short report on at least one of those as well, over the next little bit. Otherwise, other reports of the ottawa small press book fair include this extensive report (with photos!) by Pearl Pirie, and another by Stuart Ross, as well as a pre-fair report and separate fair report by Brandon Crilly!

Ottawa ON: Ottawa poet Marilyn Irwin’s fourth poetry chapbook is tiny (In/Words, 2014), following for when you pick daisies (above/ground press, 2010), flicker (above/ground press, 2012), and the self-published little nothings (2012), with another title to appear with Cameron Anstee’s Apt 9 Press sometime in 2015. What I’ve long admired about Irwin’s poetry is the precision she can capture in such small details, following a trajectory utilized by poets including Anstee, Nelson Ball and Mark Truscott. tiny is constructed out of nine poems, suggesting both a sequence of numbered individual poems as much as sections of a single poem (“tiny”).

i bleed from my pores these days
rejection red regress

no amount of sleepy time tea

i have forgotten how to breathe
and shit
and smile

means nothing except
all my mistakes:
dead birds, swinging cages

to keep a conversation
that never meant to happen
never did

This sequence of short pieces appear to be composed around a breakup and post-breakup (“at what point / does the heart stop beating?”), some of which includes some incredibly sharp lines, but on the whole, give the impression of a sketch-book of poems as opposed to finished, polished pieces. Or, given the subject matter, might the imprecision of these poems be entirely the point? Deep emotional cuts run through the collection, even if the precision of Irwin’s lines aren’t always on target. The movement here might appear a bit rough (when required), but no less subtle (when required):

Toronto ON: Prolific Cobourg, Ontario poet, editor and publisher Stuart Ross’ most recent publication is the chapbook In In My Dream (Toronto ON: BookThug, 2014), available due to Ross’ participation in the pre-fair reading as well as the fair itself, carrying with various Proper Tales Press and Mansfield Press offerings as well as copies of his own works. There is something in this collection of these fourteen short poems that feels slightly different from his multiple earlier works, less a collection built through tone and subject matter than a series of pieces that each move out into slightly different territory, coming together as a kind of collage. After dozens of poetry publications large and small, the poems of In In My Dream give the sense of Ross expanding just what he has been doing with the individual poem now for more than thirty years. After such a publishing history, there are far too many writers who simply end up working the same territories in similar ways, but the subtleties within these works is quite striking. This is Stuart Ross stretching his skills, certainly. It makes me very interested to see how these poems eventually shape into a trade-length collection, and just what he might come up with next.

A STATE OF THE SNOWDRIFT REPORT

They come right up to the door, but they do not knock and they do not enter. They are sloped such that, if I were a miniature person, I would want to toboggan down them. They are the smooth neck of Kim Novak, of Veronica Lake, of the woman who sells me Time Out at the corner newsstand. They are fuller and fluffier this year, but the lack of sun means they sparkle less. You can push your face into them and leave an imprint of your joy, your anger, your fear. Plus, they accumulate flies surprised by the sudden onslaught of the season, twigs and whirlybirds that have sailed down from nearly naked branches. I peer out my window and see them in the fields across the street, like waves. They gather around bushes and trees, lining up for autographs.

Cobourg ON: From Ross’ Proper Tales Press comes Montreal writer Sarah Burgoyne’s second chapbook, HAPPY DOG, SAD DOG (2013), following The Bread Days (Victoria BC: Oak Press, 2011). The title might sound entirely like one Ross himself might have used, but Burgoyne’s prose-poetics take on a shape entirely different. HAPPY DOG, SAD DOG is constructed out of eighteen untitled single-page prose poems, each of which are built as a single paragraph. Hers are an array of sentences that push and prod and extend and challenge, even breathlessly so, such as this sentence, from the second piece: “Since paranoia is conductive to poetics, owing to its derivative hyper-sensitivity, in the hope that such activity and experience of the senses would produce superior metaphors (while at the same time skeptical of this result due to the sound advice of my mother), I set out walking to the end that perhaps a poem would be written during one such peripatetic hypothetical-disaster emergency drill with this (disaster) in mind.” The pieces in this collection open and accumulate in very interesting ways, utilizing structures from the essay, the prose-poem, travel and personal narratives to weave a rather complex tale in a way that feels neither straightforward nor obscure, but entirely clear on its own terms. Given that she supposedly is also the author of a new publication fromBaseline Press, I’m very frustrated to only be just discovering now what so many have most likely known for some time: we should be reading Sarah Burgoyne. One suspects that she is most likely on the cusp of a first trade collection; it is just a matter of time.

IN THE EVENT that disaster strikes, if disaster is even what one would call it, and in case all forms of public transport stop, granted that the ground remain intact, then it is good that one would walk, provided that one has two working legs, or even just one, so long as the prosthetic other is sound, unless of course it breaks along the way, given that one does not have a spare, and that the fastening of the spare to the body would be simple enough, on the condition that one does not even need one (or two), and even if one does, well, for the purpose of walking when disaster strikes, one has no other option.